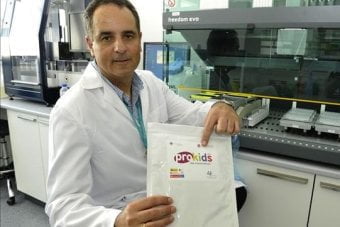 Missing and stolen children can be difficult to identify—many have forgotten their families and even their own identity. Geneticist Jose Lorente is hoping to change that with a worldwide DNA testing program that has already matched 800 children with their families. The Science Show reports.

A little girl called Anyelí was kidnapped from her house just south of Guatemala City in 2006. She was later adopted to an American couple who, without realizing the circumstances, paid large sums of money to the kidnappers and their accomplices.

Anyelí’s mother, Loyda Rodriguez, spoke about the loss on Spanish television several years ago. ‘I never abandoned her, sadly, they took her from me. The only thing I want is to have her back, I love her very much,’ she said.

According to Professor Jose Lorente at the University of Granada, stealing children for monetary gain is an entrenched industry. ‘Children are stolen for many reasons,’ he says. While it is difficult to estimate the number of stolen children, according to UNICEF, around 1.2 million children are trafficked worldwide every year. These kids are forced into prostitution, unpaid or cheap labor —or, as in Anyeli’s case—put up for illegal adoption.

Children taken at a very young age ‘don’t even know who they are’, says Lorente. ‘They don’t know the name of their parents; they don’t know where they are from.’

Consequently, even if authorities find these missing children, they cannot reunite them with their families. Lorente estimates that, worldwide, there are more than two million missing or stolen children who are not easily identifiable.

Lorente is a trained forensic geneticist and once spent his days tracking the remains of Christopher Columbus. Finding missing children was not an obvious career move. However, Lorente’s interest in this issue was piqued while travelling through Latin America, Asia and Africa.

‘I always saw children hanging around in the streets by themselves. Even very late in the evening,’ he says. ‘I started to ask my colleagues over there—doctors, or police, law enforcement—what’s going on with these children?’

The locals told Lorente that the kids didn’t know who they were, and so could not be identified. A DNA expert, Lorente knew there was a way to find the children’s parents.

So, in 2004, Lorente founded DNA ProKids, a program which now sends free DNA test and collection kits to 16 countries around the world. ‘We’ve been shipping thousands of them to Latin America and Asia,’ he says.

Parents or family members with lost children supply DNA—through blood or a mouth swab—which is decoded and placed into a database. Children who have been found on the street or rescued from trafficking are also asked to provide samples. The results from these tests are used to match the DNA of unidentified children with their families.

‘You can easily identify and tie one mother to the child; or one father to the child,’ says Lorente. ‘It’s working. We have more than 800 identifications that were made all over the world.’

The technique has also been used to avoid illegal adoptions—preventing  cases such as Anyelí’s from occurring.

When Lorente started DNA ProKids, it was the first time such a program had been attempted. Today it’s still one of the only genetics programs dedicated to identifying abandoned kids in the world.

Currently, each country has its own DNA database filled with genetic information from stolen children and their families. In the future, Lorente hopes these databases will be combined to track children as they cross borders. ‘It would be very easy to identify a child from Thailand,’ he says, ‘who ends up in Australia or Spain.’

Lorente also wants to expand the use of genetic testing to identify missing children in more countries.  ‘We have the science and the technology,’ he says. ‘It’s just a matter of using it.’