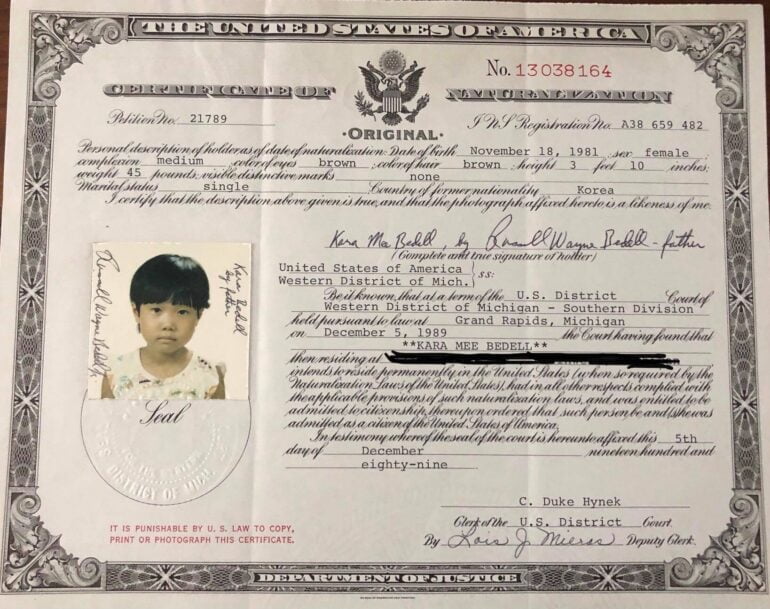 The Korean Nationality Act Article 12 states: “Any national of the Republic of Korea who falls under one of the following subparagraphs shall lose his or her nationality (1948-presently Art. 15)

-2. A person who has been adopted by an alien and has acquired the parent’s nationality…”

I was adopted in 1984 from South Korea, and according to this Nationality Act, I should have lost my Korean nationality when I was naturalized as an American citizen on December 5, 1989, through my adoptive parents in the USA.

As a result of my paternity suit that I won in June 2020, I have gained the right to be legally recognized as my biological Korean father’s daughter and put on his family register.

However, in processing this registration as a foreign citizen, I found out that my Korean nationality was never expunged. Furthermore, since I’m not interested at this moment in becoming a Korean citizen, I had to prove that I was indeed naturalized so that Holt could expunge my Korean nationality. I’m apparently still a Korean national, which means this process was never followed up on after my adoption was finalized with Holt back in 1984. If it had been, you could also conclude that there wouldn’t be a single adoptee from South Korea out there without citizenship in their adoptive country. If government institutions had mandated that adoption agencies expunge every finalized adoptee Korean nationality then they would have had to confirm that the process of naturalization was completed by sending a naturalization certificate to their adoption agency, just as I recently did. However, once we were adopted out the final checks were not in place and that is the reason why there are an estimated 26,000 Korean adoptees currently without citizenship in the US alone.

I’m apparently still a Korean national, which means this process was never followed up on after my adoption was finalized with Holt back in 1984.

Furthermore, I recently learned via a lecture given by Professor Kyung-eun Lee (PhD in law) hosted by KoRoot in Seoul (a non-profit organization that fights for Korean adoptee’s legal rights to origin while also hosting visiting adoptees in their guesthouse), that when adoption started in Korea (1955) after the Korean War it was actually illegal to relinquish your child. So, in order to combat local law and follow international requirements for adoption, they circumvented them by creating “abandoned” children. Even if a family member physically relinquished their child to an adoption agency, they would fabricate a story in order to comply with local laws and international standards. Hence the reason why so many of us were “found on the doorsteps of…” or “in a parking lot,” “at a train station,” etc. If a child was labeled as “abandoned” then a new family register was created in order to easily process the paperwork for adoption. I’ve encountered so many adoptees whom post-reunion have found out that even though their paperwork from their adoption agency states that they were “found;” in actuality, their parents, grandparents, aunts or uncles, etc had actually physically relinquished them at the adoption agency.

One of the two recent cases where I’ve had the privilege of helping find the adoptee for their birth families matched this exact story. A year ago, one of my good Korean friends after hearing my story, had reached out about how her mother was searching for four years for her sister who had been adopted back in 1973 at 3 years of age. Four years ago, my friend’s mom had found her half-sister when the adoptee had come searching for her birth family. Sadly enough after meeting, the family found out that she was actually the half-sister instead of the biological sister they had been searching for. The backstory is that my friend’s grandfather had two wives. Apparently in Korea in the ’70s early ’80s it wasn’t unheard of to have what Korean’s call a “big housewife” and a “little housewife,” or in other terms a 1st and 2nd wife. When they found themselves in financial difficulties, each wife gave up their youngest daughter (3 years old) for adoption. The mothers physically went to KSS or Korean Social Services, an adoption agency, and put their daughters up for adoption. Sadly enough when the adoptee had returned searching for her family, her mother (2nd wife), had already passed away and my friend’s mom realized that it was her half-sister due to a burn mark on her stomach. What this means is that KSS had mistakenly switched their files during the adoption process and had labeled both of them as being “abandoned.” After the meeting, my friend’s mom kept returning to KSS asking them to find the other sister, but their response was always “we emailed them but have not received a response.”

Last year when we met I introduced them to the possibility of DNA testing and they took a test I gave them through 325kamra (a non-profit whose aim is reuniting families through DNA) in the hopes that they would find her this way. Unfortunately, there weren’t any matches. When I was in Korea for my trial in June, I met her mother for lunch, as she wanted to meet her daughter’s friend but came also with the hopes that I could help her find her sister. She brought pictures that she carried around with her every day and shared that her sister was adopted through KSS in Korea and LSS (Lutheran Social Services) in the States to Minnesota. She shed heartfelt tears during the lunch expressing her sadness due to her age and how long she had been searching without any success. I promised at this lunch to do what I could. After returning home, I reached out to Minnesota adoptee groups and posted on Facebook groups asking with the adoptee’s details if anyone was my friend’s aunt. I also reached out to LSS via email (posing as my friend’s mother during all correspondence) and phone but initially, there wasn’t a response from either outlet. Surprisingly, after two weeks I received an email from LSS willing to help me if I verified through KSS in Korea all the information I had shared in the email with this social worker. After KSS did this, they started searching and within one month they found her. It took another two months for her to respond after sending a few emails in between and the last one with urgency, detailing the rapid health decline of her birth mother. The adoptee never realized her family could possibly be searching for her as her file said she was “abandoned on a street corner,” and needed time to process this all with her family. However, after receiving this urgent notification, the adoptee responded directly to my friend, and four months later adoptee, mother, and sister/family have been reunited virtually, and she is currently quarantining in Korea awaiting to meet her mother and family in person…..Four months…

The second case is a birth mom who had been searching for three years. She had been spreading her search quest via social media and asking any person she met to help find her daughter. A friend of hers reached out to me after I had participated in an adoptee discussion panel regarding my lawsuit shortly after I returned from Korea in June. She requested my help, as the U.S. adoption agency where her daughter was adopted through was coincidentally the same as mine­–Bethany Christian Services in Michigan. I followed the same steps as I did with LSS, sending emails posing as the birth mother begging for them to do their utmost to search for her, and within 3 months her daughter was found and has received the letter her birth mom wrote her. The adoptee had no idea that her birth mom was or could be searching for her, and is quite shocked by it all. She needs time to respond, so the birth mother is anxiously waiting. 3 months…

Why is the search process so difficult? Even for birth families? Why isn’t there a sense of urgency or empathy from agencies and government institutions in the importance of this to adoptees and first families?

When/If an adoptee gains access to their file from their adoptive parents or adoption agency, seeing these words above, gives immediately a discouraging effect on an adoptee’s inkling to search for birth family. When strangers ask us as we get older, “Don’t you want to find your birth family?” they cannot possibly comprehend how weighted a question like that is, when we constantly hold “abandoned” in the back of our minds. Since Korea used “abandoned” as a legal way to bypass local laws to accommodate international laws, it created for us adoptees a lie that we carry with us our entire lives. Just as it was unknown to my friend’s aunt and most likely the other adoptee that they were never “abandoned,” it was also probably the reason why they never searched themselves for their birth families. It was the reason why I never searched for my birth family until four years ago. I believed fully in the “lie” used by the Korean government and agencies to cover up relinquishments, that I was “abandoned” and therefore could never find my birth family even if I had any urge to do so. However, with the development of DNA testing the whole ball game has changed. DNA has pushed a door wide open that government institutions and adoption agencies could never have imagined.

“Adoptees are finding out the truth behind their “abandonment,” and in the majority of cases, we are finding that we were never abandoned. Governments need to take responsibility for their creation of these lies, and one step in doing so is to give adoptees their legal right to their origin, opening up records completely, and allowing direct contact between birth families and adoptees. Only then, can there ever be forgiveness and peace found in the trauma of inter-country adoption that was founded on a lie.

During the 2012 Paris gathering of Korean adoptees, Le Monde special feature (a French newspaper) wrote an article about this gathering and sums up a portion of this struggle quite accurately: “The Problem, it’s not having been adopted, but having been abandoned.” There are certain cases of adoption that were what some may consider out of necessity, but the fact that the government allowed us to be legally registered as being “abandoned” allotted for the continuous turmoil many of us who search for our identities later in life face. As a result of this label, the search is painful, defeating, tiresome, degrading, and many of us give up. To the Korean government, I would say,

“I urge you to give us our legal right to our origin, restore justice for us who were never ‘abandoned’ and want to know who our families are.” To fellow adoptees, I say, “I urge you to never give up and fight for your right to know!”

READ: The “Unknown” Culture Club: Korean Adoptees, Then and Now