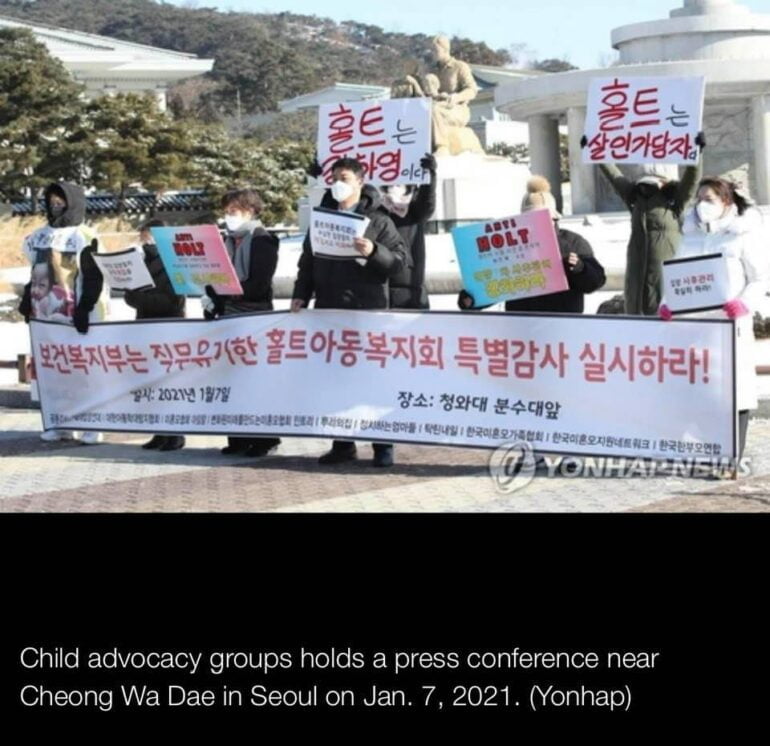 The Last Letter to Jungin

SEOUL, Jan. 7 (Yonhap) — Children’s rights activists on Thursday urged the health ministry to look into the role, if any, of a major adoption agency in the death of a 16-month-old adoptee.

At a press conference near Cheong Wa Dae, the activists, including those who advocated for the rights of adoptees and single-parent households, urged the ministry to check whether there were any lapses in the agency’s work to protect the child.

They also demanded Holt Children’s Services, the country’s biggest adoption agency, reveal the detailed circumstances of the adoption of the dead girl, named Jung-in, and the parents’ motives in adopting her.

“The government should find out whether Holt had detected signs of abuse even before it was informed of the abuse … and how the agency responded to each of the three abuse reports,” it said.

Jung-in was adopted in February and died in October of severe abdominal injuries and internal bleeding that were caused by “strong external force applied on her back.” Her adoptive mother insisted the baby sustained the injuries because she accidentally dropped her.

An investigative report aired over the weekend has become a catalyst for a renewed focus on her case and how no one proactively intervened to prevent the tragedy despite a series of glaring warning signs.

Amid mounting criticism and pressure, the agency issued an apology in a statement the previous day. But it denied that it was careless and neglectful in dealing with Jung-in’s case. It also argued that there was no fault in the adoption process.

In 2014, the health ministry conducted a probe into the agency and concluded that it failed to sufficiently check on the well-being of adopted children in some cases.

On Wednesday, Commissioner General Kim Chang-yong, the country’s police chief, apologized for “failing to protect the life of a young abused victim.” The head of the Seoul Yangcheon Police Office, which has jurisdiction over the case, was removed from his post to take responsibility for the mismanagement.