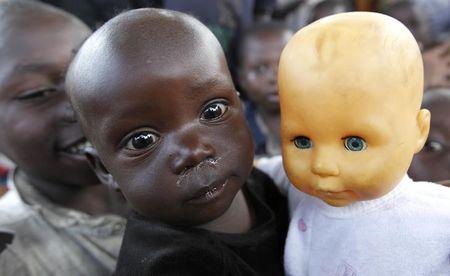 A Thomson Reuters Foundation investigation in May found that child traffickers bribed, tricked and coerced Ugandan families into giving up their children for adoption.

NAIROBI (Thomson Reuters Foundation) – Legislators in the United States are lobbying the government of the Democratic Republic of Congo (DRC) to give 400 adopted children exit visas, after it suspended international adoptions because of fears children were being trafficked

Several African countries have stopped their children from being adopted by foreigners because of evidence that some of those involved in the business have been acting unethically.

A Thomson Reuters Foundation investigation in May found that child traffickers bribed, tricked and coerced Ugandan families into giving up their children for adoption.

At least 136 members of the U.S. Congress sent a letter to the DRC’s senate and parliament on Tuesday asking them to speed up 400 pending adoption cases.

“Due to the delay in processing the outstanding adoption cases, we understand that at least one child has unnecessarily died despite already possessing a valid visa with which to immediately enter the United States,” the letter said.

“We encourage you to act without delay to facilitate the union of these loving families as soon as possible.”

The Congolese government suspended exit permits for adopted children in September 2013, pending the introduction of a new adoption law.

Congolese parliamentarians have raised doubts over international adoptions because “they consider many Congolese judges to be corrupt”, the U.S. State Department said on its website.

The suspension left 400 children who had already been legally adopted by foreigners in limbo.

At least 11 of these children have since died, according to the pro-adoption U.S. advocacy group Both Ends Burning.

More than 40 other “medically fragile” children’s “lives are in jeopardy”, it said on its website.

Some desperate U.S. citizens have smuggled their adopted children out of the DRC illegally since 2013, according to the U.S. State Department.

There has been a surge in overseas adoptions by Americans, particularly evangelical Christians who see it as a religious and moral duty.

They often fall prey to swindlers who trick poor Congolese parents into believing that their children are only going abroad for education; bribe officials; and falsify documents to make out that children are orphans.

Americans adopted 6,441 children from around the world in 2013/2014, acccording to the State Department, the DRC being the second most popular African source nation, after Ethiopia.

Ghana, Benin, Kenya and Ethiopia have suspended intercountry adoptions as they strengthen their policies to combat trafficking.