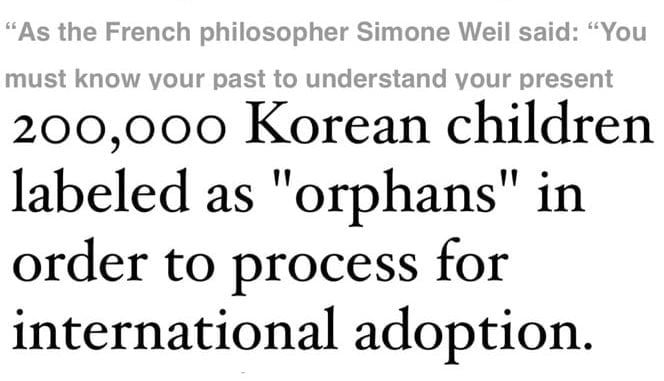 Did Adoption Agencies label 200,000 Korean infants and children as orphans in order to process them overseas for international adoption? Hundreds of Korean adoptees are requesting an investigation into their adoptions.

Danish Korean adoptees, along with global demand, seek the truth about their adoptions.

“We have reason to suspect that a lot of the information about us, at least the information we know, is incorrect,” said Peter Knudsen, who is one of 50 cosigners on an application filed to South Korea’s Truth and Reconciliation Commission last week to clarify their origins.

Dozens of Danish adoptees who were born in South Korea are demanding that the South Korean government come clean about their origins. They say adoption practices in the 1970s and ‘80s often included false claims about the circumstances of their births.

Excerpt from the interview:
Carol Hills: “What is the evidence that a lot of the information that adoptees received was false about their origins?”
Peter Knudsen: So, the most common one is about being an orphan. So, almost all of us in our adoption file, it says that we are orphans. But some of the adoptees have visited the adoption companies in [South] Korea, and on that occasion, they’ve actually gotten access to documents that show the birth parents’ names. And you cannot have a situation where, on one side you’re adopted as an orphan [with unknown parents], and on the other side, you have information about the birth family. I mean, both things can’t be true at once.
Carol Hills: What do adoptees who are bringing this case forward believe that the adoption agencies in South Korea did in terms of altering the information about the adoptees?
Peter Knudsen: So, a lot of the adoptees, again, believe that the adoption companies in Korea changed information in order to make the adoption process easier. It’s different kinds of information, like I mentioned before, than something like whether you’re an orphan or not, your birth date. So, some people find out that they actually may be even up to a year older than what is stated in the adoption file. And we have some serious cases also where an adoptee, or where a child, was released for adoption, and then, for some reason — and we presume or guess that it’s because the child passed away — then another child had been sent in that child’s place.”
Carol Hills: Why would the adoption agencies in Korea have done this? Why would they have falsified the information about the babies and young children being adopted by Danes?
Peter Knudsen:  “I can’t speculate into the motives of the adoption companies, but I can, of course, come up with a guess, right? And to me, it’s a probability that it’s all about business, that the funding somehow is better when they release a child for international adoption as opposed to domestic adoption.”
Visit The World to listen to the complete story
August 31, 2022 · 12:00 PM EDT, By Joshua Coe

This collection, compiled by Korean adoptees, is a tribute to transracially adopted people sent worldwide. It has been hailed to be the first book to allow Korean adoptees the opportunity to speak freely since the pioneering of intercountry adoption after the Korean War. If you were adopted, you are not alone. These stories validate the experiences of all those who have been ridiculed or outright abused but have found the will to survive, thrive, and share their tale. Adopted people worldwide are reclaiming the right to truth and access to birth documents. This book is a living testament to why previous “orphans” do not endorse the profitable Evangelical Orphan Movement. Those who work in the human rights field, are whistleblowers, or adopted will see the value of this book. After years of forced “positivity” led by the profiteers, it is time to be real. These are real stories from individuals no longer serving the adoption pioneers’ fanciful wishes and advertising campaigns. Read this book before you pay adoption agency fees. These courageous narratives could save you tens of thousands of dollars or prevent you from obtaining a child unethically. Be the first to read these narratives and join the ever-expanding Adoption Truth and Transparency Worldwide Information Network. It’s never too late to walk in awareness!