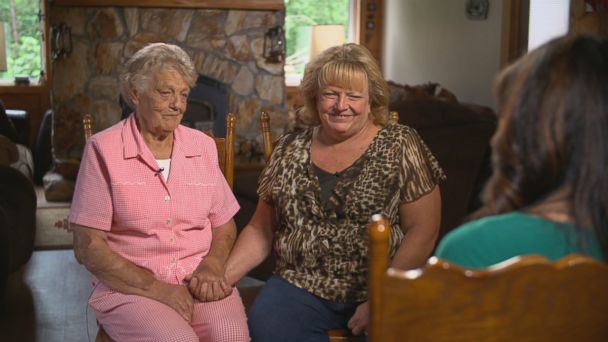 Kriste Hughes has wondered about her birth parents since she was a teenager. But it was years later that she learned her adoption was far from typical — a doctor in Georgia essentially sold her to her adoptive parents.

For Hughes, who is now 51, finding a sibling or even a relative, “would make me feel like I’ve found a little part of myself, my true self,” she told “Nightline.” She said that her adoptive father has supported her throughout her journey of trying to unravel the mystery of her biological family.

Hughes is among the roughly 200 adults who have come to be known as the “Hicks Babies,” newborns who were illegally sold into black market adoptions by Dr. Thomas Jugarthy Hicks between 1950 and 1965, according to county birth records.

Melinda Dawson, one of the Hicks Babies who is now 52, said her mother “was told that she could not have children and she wanted a baby…so my father and her purchased me from the doctor.”

Hicks was considered a cornerstone in the mining community of McCaysville, Georgia, where he served as the town doctor. But he was known for performing abortions, which were illegal at the time. But for a select few, Hicks took special care, arranging for them to stay at a hotel down the street and convincing them to carry their babies to term.

Hicks would tell the women he would find adoptive parents for their children. In other reported cases, he lied to the birth mothers, telling them their newborn baby had died. Hicks would then secretly sell the newborn for $800 to $1,000 each and included a forged birth certificate with the adoptive parents’ names on it. At least 49 of the babies were sold to parents in the Akron, Ohio area.

Hicks surrendered his medical license in 1964 for performing an illegal abortion. He died in 1972 at age 83, having never been held accountable for these black market babies.

With no record of the original birth mothers on their birth certificates, the Hicks Babies, now grown and with families of their own, had no way of finding out the truth about their past. Some didn’t even know they had been adopted until stories about the Hicks Babies first made headlines in 1997.

“Nightline” spoke with eight people who identify themselves as Hicks Babies, including Hughes and Dawson, and asked the genealogy website Ancestry.com for help in tracking down their birth parents through DNA testing. Using the latest advanced technology, Ancestry.com can compare more than 700,000 DNA markers.

Their DNA samples were sent off to a lab, where Ancestry.com agreed to analyze their DNA for free.

Ancestry.com boasts one of the largest genealogy databases in the world with one million people, but with more than 300 million people living in the United States, the odds of finding a close family match are relatively small.

Against the odds, Melinda Dawson and others discovered second and third cousins through Ancestry.com’s testing.

But Kriste Hughes’s DNA match hit on a first cousin, a woman named Jackie Flowers, which is even more rare. To add to her shock, when Hughes spoke to her cousin on the phone, the cousin revealed that two of her aunts had given birth at the Hicks clinic and that one of them could be Hughes’ birth mother. Only one of them was still alive. Hughes learned that one of the women, also had a son named Roger Tipton, 52, who could potentially be Hughes’ biological brother. He agreed to take a DNA test.

Within another few weeks, Hughes, whose adoptive father has supported her throughout this journey, received the news that her life’s mystery had been solved. Her DNA matched with Roger, which opened up a whole new level of connection to her biological family — a family who she never even knew existed.

The best part was the woman who turned out to be her biological mother was still alive.

“I know this is real, but I’m still kind of in shock,” Hughes said. “There’s a part of me in my heart doesn’t want to get too invested.”

But Hughes was eager to re-connect, so “Nightline” brought her to rural Georgia to meet her biological family. Her first stop was to meet Roger, the man she now knows is her brother.

The anxious anticipation gave way to a thrilling reunion. Brother and sister greeted each other with a bear hug and immediately recognized a family resemblance in each other’s faces. They could barely catch their breaths as they started exchanging personal history. Roger and Kristie, who are one year and a half apart, had lived their entire lives without either of them knowing the other existed. Roger said he has always wanted to have a sister.

Looking back on their situation, Roger said that Dr. Hicks took “a lot of love, a lot of memories” away from them.

“I wish I had had a sister to pick on or picked on me or something,” he said. “I just don’t think [Hicks] had a right to play God and… bust up our family.”

Roger’s mother, Thelma Tipton, now 75, said she never forgot the daughter she thought she lost 51 years ago. Unlike most of the other Hicks moms who willingly gave up their babies, Thelma, who was a single mom at the time, said Hicks told her after she gave birth that Kriste was stillborn.

“[He said] she had a bad heart… and I believed it,” Tipton said.

She said Hicks even had her sign her daughter’s death certificate. One week later Hicks sold Kriste to her adoptive parents.

Even with the knowledge of all that they missed, it was a bittersweet moment of triumph for the women, mother and daughter, to be finally reunited. They both celebrated their new found family and are making up for lost time.

“I’ve got both of my kids, my son-in-law, and my daughter-in-law and three of my grandkids, I’m happy,” Tipton said.