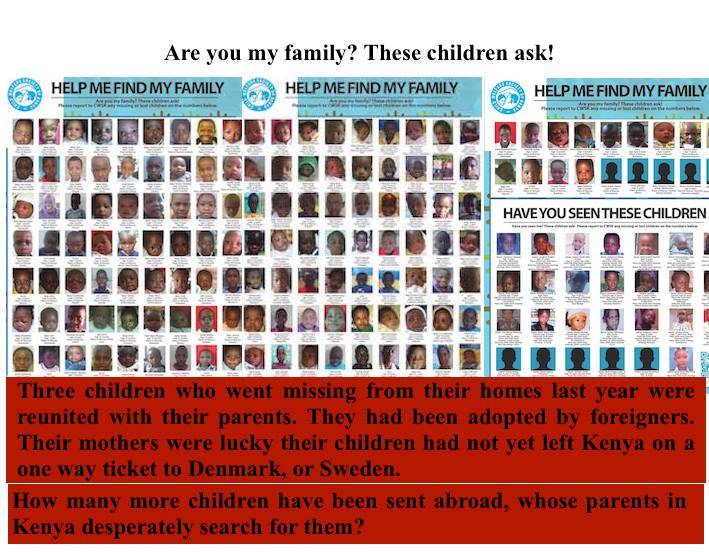 There is new adoption scandal. Kenya this time.

It seems to never stop as the Western adoption agencies can operate with impunity.

This also involves the newly created Danish Agency DIA, which is the agency created by the Danish government, out of a merger of Danadopt and AC Denmark.
Why? Because of the Ethiopian adoption scandal. The excellent movie “Mercy Mercy” that gives a unique insight into the lies, the betrayal, the corruption in intercountry adoption. The movie was shown allover the world. Outrage.

But did the “Adoption World” drew any lessons? Nope.  They advised Ethiopia to ratify the Hague Adoption Convention.

And now, the newly established DIA is caught up in a scandal again.

Here the sad result. It’s well known that once intercountry really gets going, children need to be found.  Need to be harvested.  And things get murky.
These mothers were lucky. Their children had not yet left Kenya on a one way ticket to Denmark, or Sweden.

And until now, no one really asks the central question:

How many more children have been sent abroad, whose parents in Kenya desperately search  for them.

For Against Child Trafficking, this is like a deja vu.  India, Romania, Ethiopia… the list is endless.

Our first case, the Indian parents looking for their missing – stolen children.
The kidnappers were only caught years later, when their child was already in The Netherlands…

Source: Kenya, another adoption scandal. The cost of Impunity.