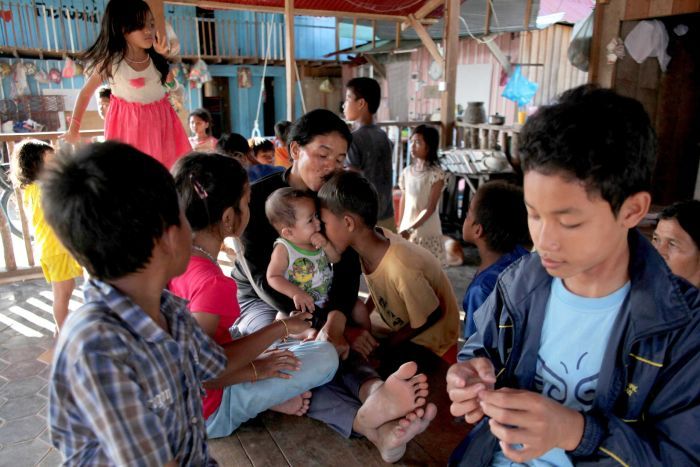 Tara Winkler thought she was doing the right thing when she travelled to Cambodia to volunteer in an orphanage, but she unwittingly became part of an industry that relies on taking children from their families and keeping them in institutions. Now she hopes to raise awareness of the problems with both orphanage tourism and other kinds of voluntourism. Late Night Live reports.

Tara Winkler was barely out of high school when she decided to take a gap year, travelling through Thailand, Laos and Vietnam before arriving in Cambodia, one of the poorest countries in the world. She volunteered at the Landmines Museum in Phnom Penh, and then went to visit Battambang, where her tuk-tuk driver suggested she visit some orphanages.

‘One of the orphanages I visited was just particularly poor. I had never encountered poverty like that in my life. I was so shocked by the living standards and felt compelled to do something about it,’ she tells Late Night Live.

The problem with orphanages is that they are businesses, where children become the commodities and well-intended but uninformed foreigners—like myself, eight years ago—are the customers.

‘I went back to Australia and raised some money, but didn’t feel comfortable just sending the money back over. I knew there was a lot of corruption in Cambodia and suspected that potentially there was some at the orphanage due to the level of poverty in the center. And so I decided to take the money back myself.’  Tara Winkler, Cambodian Children’s Trust

The story of what happened next was documented by Australian Story in 2010 and again in 2014. Winkler spent time volunteering at the orphanage, which was called SKO—installing water filters, setting up the kitchen, getting the kids vaccinated and taking them to the dentist. As months passed, she realised things weren’t as they seemed. Funds were being embezzled and the children neglected and abused.

Along with another staff member, Winkler set up an alternative home and rescued 27 Cambodian children, some as young as two, from SKO. But while she had believed all the children were orphans, in fact many had families who could care for them.

‘I really thought that those children were orphans in the traditional sense—that they had nobody in the world to look after them. It turned out that that wasn’t the case at all. These kids had families and they missed their families,’ Winkler says.

‘These kids that we rescued from that orphanage are now living in Battambang with their biological families. The core aim of our work these days is to try to prevent children from either being trafficked or subjected to child labour or from ending up in orphanages. We try to keep families together.

‘Families in Cambodia believe that trusting their child to an orphanage is going to lead to a path out of poverty, to a better life, and they just don’t understand the harm that comes to all children who grow up in institutions.’

Now Winkler is pushing for Australians to be aware of what she describes as an international crisis of children living in institutions.

Her concerns are reflected by figures from UNICEF, which has warned of ‘a rapidly increasing and largely unregulated residential care industry in Cambodia’. Between 2005 and 2010, the organization says, there was a 75 per cent increase in the number of residential care facilities across the country. The number of children in these facilities also increased sharply, from around 6,000 to almost 12,000.

‘The shocking realization is that this is being caused by us, by our misguided support,’ Winkler says. ‘The business model of these orphanages is to keep the kids poor, to evoke sympathy so that people donate to the orphanage. That’s how they make the money.’

‘The problem with orphanages is that they are businesses, where children become the commodities and well-intended but uninformed foreigners—like myself, eight years ago—are the customers.’

Winkler cautions tourists to stay away from even ‘good orphanages’ where facilities are well funded and children are well cared for, as it still encourages an industry that relies on children living in residential care.

‘An international body of research has shown that kids who grow up in institutions, the way their brains develop is affected, and the attachment disorders that they develop stay with them for the rest of their lives—that’s whether they’re in one of the really good orphanages or one of the really bad orphanages,’ she says.

Beyond the invasion of privacy from well-meaning tourists, there are also serious child protection risks in allowing strangers into children’s homes.

She wants western tourists to ask themselves why they are visiting poor children in developing countries in the first place.

It’s not only volunteering at orphanages that now makes Winkler uncomfortable. She’s also worried about how foreigners donating short-term, unskilled labour can crowd out locals who are looking for work in other areas, like building houses and infrastructure in rural communities. This kind of ‘voluntourism’ has become so popular it’s an industry in itself.

‘One of the problems with voluntourism is that it takes local jobs. If you’re coming to Cambodia to build a house, the issue is that there are local builders here who need that work and need that income to support their local families. Cambodians built Angkor Wat, they’re more than capable of building their own houses.

‘The truth of voluntourism is that you’re not actually helping, it’s a fundraising activity. And I wonder whether if you knew that, you would still want to do it.’

Winkler’s work now goes in a very different direction to what originally drew her to Cambodia, but she hopes her advocacy will prevent people from making the same mistakes she has made.

‘I have learnt from those mistakes; I have learned the hard way … when you make mistakes in development, you’re making mistakes with people’s lives.’

Despite the mistakes, there have been some ‘wonderful success stories’ from Winkler’s Cambodian Children’s Trust. Many of the children rescued from SKO have grown up and graduated.

‘One of the girls who was interviewed in the Australian Story program finished year 12 and is working as a producer at the BBC Radio in Phnom Penh,’ Winkler says.

She also tells the story of a very poor family who had no form of income and no way to support their children to go to school.

‘We enabled them to set up a business, a fish-farming business, and that provided enough income generation to support their own children,’ Winkler says.