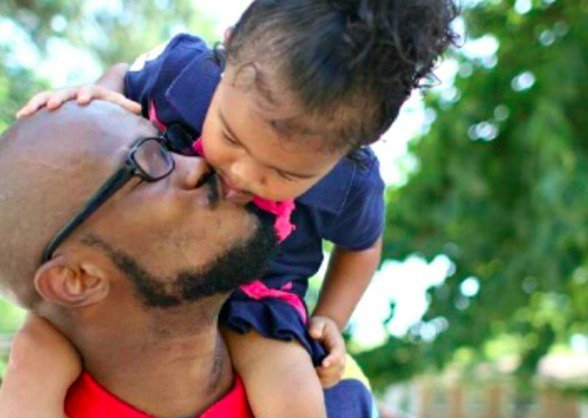 Now together, father, daughter, and a support group of family and friends are all building a bright future for a beautiful and bubbly little girl.
Being an expectant father for the first time gives you butterflies of nerves but loads of excitement.

Thoughts of a little bundle of joy about to enter your life gives you an overwhelming sense of joy and happiness.

That is, unless you’re Chris Emanuel.

You’ve likely seen his story go viral in the last 24 hours. He’s the South Carolina father whose baby daughter was given up for adoption without him knowing or giving his consent.

In 2012, Emanuel met his girlfriend at work. He says the relationship was a great one and they were both excited when she became pregnant. They made plans to marry, care for their daughter together, and build a happy life — until her parents started to intervene. Emanuel believes it was because of his race.

Suddenly he started to get pushed out of doctor visits, time with his girlfriend, and ultimately any involvement in the pregnancy. Eventually they only communicated through text message. But through it all, his texts remained loving and supportive as the months went by.

Until everything went dark.

Baby Skylar was born several days prior to her due date. Skylar’s mother, whom Emanuel refers to as “the egg donor,” was induced several days early without his knowledge. At this point he had been cut off and unaware of what was going on.

At the hospital, Skylar was adopted by a family and taken to their home in another state. It was because of the baby’s mixed race and an ancient South Carolina law that labeled her “difficult to adopt.” As a result, her birth mother was allowed to go through with an out-of-state adoption without notifying Emanuel.

Unmarried and with no legal claim to his daughter, Emanuel, at the encouragement of his family just prior to birth, registered on an online “responsible father registry.” South Carolina is one of 25 states where unwed fathers can be put into a database to be notified if their child is put up for adoption. But only after birth.

That’s when he became aware of the startling news.

Emanuel says, shortly after registering, he was told a family from out of state had adopted his daughter. Devastation soon turned to dedication, and after hiring a legal team and enduring three months of court proceedings, Skylar finally came home.

Now, giggles of delight and daily hugs are a part of their father-daughter routine. In an exclusive interview with me, Emanuel talked about the joy she brings him.

“She has changed my entire outlook on life. She has made me a lot more selfless,” he said.

But while Emanuel has been vocal about sharing his story, being at the center of a custody debate has taken its toll.

“It’s nothing I chose,” he said. “It was a natural transition given the circumstances surrounding Skylar’s illegal adoption. It’s not an easy role given the scrutiny and criticism, but Skylar gives me the strength everyday!”

Through his faith and love for his daughter, Emanuel tells me his days are now filled with love and support as life as a single father has settled in.

“My daughter looks up to me, I am the standard in which she will judge all men! I am more conscious about what I do, what I say, the company I have around me, because I know it will all influence Skylar.”

Fathers’ rights is still a hotly contested issue in the U.S. There have been numerous high-profile custody cases that highlight the lack of rights fathers have. For most, it may simply be a case of “I didn’t know.” Because really, who would suspect a child could be put up for adoption without the biological father being notified?

In Emanuel’s case, not only was he lied to by his girlfriend (who admitted it in court) but so were the adoptive parents. The adoptive parents were told that the father was “out of the picture,” which was also proven to be untrue. This, therefore, affected even more lives and created additional heartache.

Becoming an unlikely champion, Emanuel isn’t about to let his voice be silenced. He tells me he’s starting the Sky is the Limit Foundation to help other fathers in similar situations.

“The most basic thing a father can do is search to see if there is a Father Registry and the requirements in their state. Initiate or file paternity action prior to the birth,” he said. While unexpected, he believes this is his the new role: helping other fathers who may not know their rights or where to find help.

One day down the road, Skylar will grow up and have questions. It’s a scene single parents experience all over this country. Emanuel knows they’ll come and knows there’s plenty on the internet she’ll be able to read.

When I asked him what he really wants his daughter to know, he told me simply: it’s all about love.

Since Skylar’s return to her father, the last 16 months have been busy. There’s play dates, family gatherings, bed-time routines, toddler tantrums, and a tired father. But through it all, since May 3, 2014, the day she came home, Emanuel will never say he’s ungrateful. He knows the work it took to bring Skylar home and the faith he placed in others.

Now together, father, daughter, and a support group of family and friends that inspired him to register his name in the first place, are all building a bright future for a beautiful and bubbly little girl.

One he almost didn’t realize was possible.