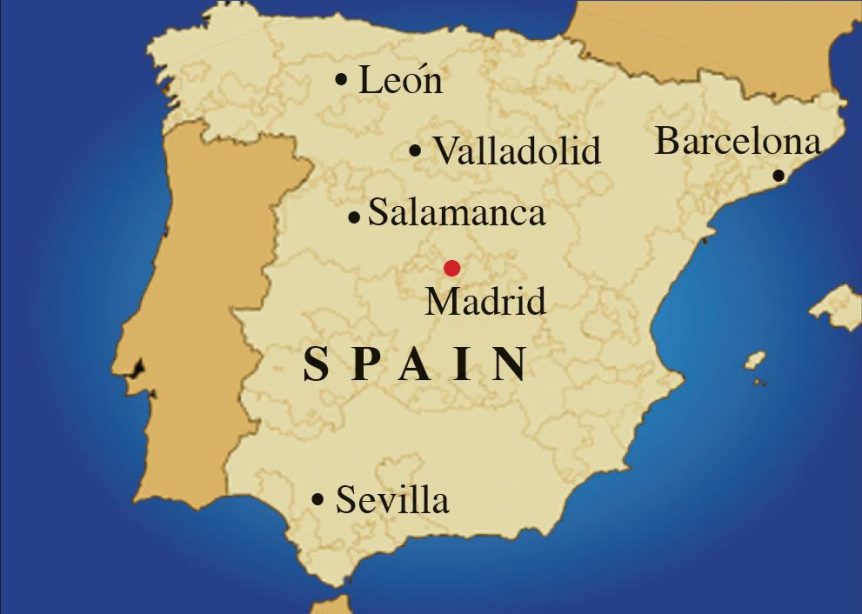 BARCELONA, Spain — At a cemetery in Barcelona, trucks arrived for a court-ordered exhumation.

All across Spain, officials are opening the coffins of dead newborn babies to see if there are any human remains inside.They have discovered that many of the coffins are empty.

Spain is reeling from one of the worst crimes since World War II. It is known simply as “los bebés robados,” the stolen babies.

The sheer scale of it is staggering: perhaps 300,000 Spanish babies have been taken from their mothers at birth and sold on the black market.

Beginning during the Franco dictatorship in 1939 and continuing until the 1990s, newborns were stolen from hospitals and trafficked by a secret network of doctors, nurses, priests, and nuns.

It began as a system for taking children from families considered politically dangerous to the Franco regime to re-educate them.

In many cases, the attending nurse would take the newborn from the mother to have to it examined or cleaned. The nurse would return with a dead baby that was kept in a freezer at the hospital as proof that the child had died.

Then a coffin would be buried that contained only rocks, or perhaps a severed limb from some other patient.

What began as a system of political control gradually turned into a giant money-making operation. And it never came to light until a man named Juan Luis Moreno sat by his father’s deathbed and was told that both he and his childhood friend Antonio Barroso were both purchased from a nun.

Barroso recalled, “When I was a boy, other boys at school said that my mother wasn’t my real mother. So I asked my mother, and she said, ‘of course you’re my son.’ But when I did a DNA test with my mother, the probability of maternity was 0 percent.”

Barroso started Anadir, an association fighting for justice for the victims of this scandal.

“I filed three judicial complaints, which were all ignored,” he said. “Then I realized that I needed to establish an association to see if the courts would pay attention because they were ignoring us.”

And as their story spread through the media, more and more Spanish women, who believe their babies were stolen, started to come forward.

Outside a courthouse in Valencia, women looking for lost children or siblings held up signs for the TV cameras.

“I’m looking for my daughter born in 1982,” one woman said. “Like the others, I saw her at birth and I didn’t see her again. They told me she had died.”

“I’m looking for my brother, who was born in July 1971 in Valencia,” another woman said.

Barroso said, “I believe that Spain was a supermarket for babies, for Spaniards themselves, and for the rest of the world.”

“The crimes were committed for money. But there was no criminal organization with a mafia boss in charge. Every hospital had its own business,” Barroso said.

CBN News spoke with some of the victims, women looking for their parents, siblings, or children. They all said they feel the government is dragging its feet.

“Sometimes we feel as if they’re playing with us,” Anabel, who is looking for her parents, told CBN News.

“We want a fair justice and some brave judges,” she said. “We want the government to support us because they have the strength. They have the means and power to order and say these are the mothers of these children and to turn over the archives.”

Another woman who is looking for her sister said it feels like “a black hole.”

“We need to know where our parents and brothers and sisters and babies are,” she said.

Enrique Vila, a Valencia lawyer for the victims and author of a bestselling book about the stolen babies, told CBN News, “Spanish justice is deceiving us.”

“They deceive by giving the image that they are working to resolve this problem, that they are investigating it. It’s a good political image to show the rest of the world,” he said.

Rumors of stolen babies had circulated in Spain for decades. But the cases have not gone to court until this year.

“It seems incredible that there are doctors, there are medical assistants, there are nurses, there are nuns, who are still loose on the streets, who have stolen children and become rich with millions of pesetas and then euros, and they have not yet been arrested or detained or put in prison,” Vila said. “This I don’t think would happen in any other country.”

Looking the Other Way?

Vila does not believe the thefts were a policy of the Catholic Church, but the actions of some individual priests and nuns, as well as doctors and nurses.

But he wonders if the church hierarchy knew about it and looked the other way. Church officials deny it.

Spain is today a nation of many tortured souls, people who once thought they knew who they were and have discovered they are someone else.

“You find out about this big lie that they sold Antonio and me,” Morena said. “It’s a crime. It’s the buying and selling of babies, like someone who just buys a computer. It’s horrible.”

Praxe Maxia said, “I cry every night when I go to sleep for my daughter. When she was born, I could not hug her. I only had her on my breast. They put her there while they cut the umbilical cord. They cut the cord and they took her and I didn’t see her again.”

The victims’ group Anadir has filed more than 900 lawsuits over stolen babies, but most have been thrown out because of lack of evidence.

Even if the Spanish legal system gets to the bottom of this crime, it can never repair the damage done to so many Spanish mothers and the children they never knew.

**This report also includes coverage from Madrid and Valencia.