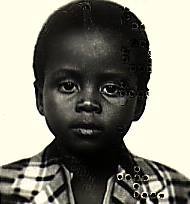 “In 2002, I finally found my family. I learned the exact circumstances of my adoption: I had been kidnapped with forty children from an institution that is called  a “nursery” here, where poor families can leave their children, for the time to get out of a distress situation, and take them back.”

Part 1: Interview with Tinan Leroy held in 2010 and published on Unicef France’s website.

He’s not even 5 years old when he arrives at Roissy airport, among other Haitian children adopted by French families in 1984.  Tinan doesn’t understand who is this white woman hugging him; he doesn’t know which country he’s in, what he’s doing here. The boy is completely confused and disoriented. But he soon realizes that he will never see again his mother who remained in Haiti. This is the story of an uprooted child, now a committed adult.

Where did you live before leaving for France?

My mother had put me in a nursery. It was not an institution that sends children for adoption. It was a place where parents could place their children for some time before taking them back. My mother didn’t have the means to raise me and my brother. So she put me in that establishment, for the time to improve her situation. We were about forty children in the center.

How did you end up in the airplane for France?

I don’t remember clearly what happened. I was only 4 and a half years old when I landed on the French soil! I don’t remember having been told that we were going to France, anyway it wouldn’t have any meaning to me. We were several children on the plane but I don’t know how many. I remember the heavy atmosphere of the trip, I realized something was wrong. I saw things I had never seen before: first a big machine that flies, and once arrived all the white people and the cold [weather]… I didn’t understand immediately what was going on, but I understood I wouldn’t see my mother again. I was baffled by the white woman in tears who threw herself at my feet at Roissy.

Do you know now who had organized the departure?

It’s difficult to find the lead, to know who decided the departure, how it happened exactly, but for me the essential is not to find who were the responsible. The essential is mainly to warn, what happened to me also happened to at least forty other children and I fear that today these practices are more common than we think. We tend to minimize the uprooting, but for children it’s terrible. The comfort gained in a country like France doesn’t offset the uprooting experienced by the child. For a child who has no parent, it’s different. But in my case some adults believed they were doing a good action while I wasn’t abandoned.

Yes. During the adoption proceedings, you have to be careful to the risks of child trafficking.  People in Haiti are taking advantage of the money given by foster families.  The governments and large organizations such as Unicef should monitor the adoption proceedings.  There are inevitably many children affected by these traffickings, there is money flowing, therefore embezzlement. When you adopt a child you have to check every step, if not you feed the trafficking. There are abuses, for example in my case, someone made my biological mother sign the relinquishing paper.  But she couldn’t read,  she didn’t know what she was signing!

How did you find your biological mother and family?

In 2001, I was looking to track down my biological family since long. I had my original name and my birth place to do that. The real problem was to be able to go to Haiti without knowing anyone, not even the language, and knowing that the level of insecurity was very high.  A friend, here in France, was communicating through the internet with a Haitian. She put us in contact together. And that boy had heard about me! A total coincidence! He was friend of my cousin who had told him about my story, the story of the little Manassé, it’s my Haitian given name, who disappeared from the nursery.

My mother called me several days later. Such an emotion to hear her.  My cousin interpreted us on the phone, my mother spoke Creole and I only spoke French.

In 2002, I returned to Haiti for the first time. I thought I would be received like a curious beast, but for my family I wasn’t “the European”.  It was like if I had always been with them and I got my nickname back, now I’m called Tinan again, it’s my “non jwèt ” as they say there.

Your biological mother told you about your disappearance?

Yes,  she told me that when she had came to fetch me at the nursery there was nobody.  Neither the children, nor the staff.  A shock.  All rumors were circulating about us;  we had been killed, we had been victims of organ traffickings, we had been adopted.  But apparently my mother never said that  I was lost. Her faith helped her to keep going. And she shared her pain with other mothers whose children went missing.

What adult are you now, are you still uprooted?

Today I still feel I belong nowhere, I feel lost between two worlds. I’m missing landmarks. It’s destabilizing. But I try to cling to concrete things. I want for example to help other Haitians who were uprooted like me to find their biological families if they feel the need.

“I pretended to adapt myself, but deep down I was rebellious.”
Tinan Leroy, 34, dancer and musician, adopted from Haiti in 1984.

“I was four and half years old. I remember quite well my first steps in France, my first meeting with my adoptive mother whom I discovered at the airport. I quickly felt that this woman was coming to “own” me and wanted me to call her “mom”, which made no sense to me because I had a mother in Haiti.

She gave me a new name: Christophe. Without really understanding what was happening to me, I felt I’d better adjust to this new life in this a little strange place: I had to be the best at school, the best in sport, in music, and that I had to obey this lady. I had to play the role because I was afraid she would abandon me, as I thought my biological mother had abandoned me.

I pretended so well that all who hung around with me were also convinced that my adoption was successful. But deep down I was rebellious. I’ve never accepted this absurd uprooting. For a child who has parents and finds himself in a different country with other parents who claim to be his, it’s indeed absurd…

Growing up, I felt the need to know where I came from, to know my country of origin, my mom, my big brother. My adoptive mother had let me consult my file which stated that my biological mother had given me up for adoption because she didn’t have the means to raise me. I had always heard from people around me that she had done a good action, she had sacrificed for me to have a better future and I had to be grateful to my adoptive mother because she had saved me.

In 2002, I finally found my family. I learned the exact circumstances of my adoption: I had been kidnapped with forty children from an institution that is called  a “nursery” here, where poor families can leave their children, for the time to get out of a distress situation, and take them back. I met with 40 other mothers, victims of the same kidnapping, who had gathered to demand accountability from the Haitian government. They begged me to help them find their children. But it’s not that simple…

When I went for the first time to Haiti, I had a very French vision of adoption: I thought it was a good thing and that it was my fault if I didn’t live it well. I wanted to make a personal approach, and then I realized that I had to denounce what I had seen.

I have since returned several times. I met adopters and adoptees. After the publication of my book (1) in 2011, many have contacted me; I searched for eight of them and I found five families. All the parents said they had been manipulated and that they hadn’t given their approval for a full adoption: they were made to sign a document, on which was supposedly written (they could not read French) that they would remain in constant contact with their children, and they would return from time to time on holiday and then permanently.

I discovered that international adoption in Haiti has become a business that generates a lot of money. I met with the leaders of large orphanages: they live in luxurious Villas, rolling in nice cars.  I found the reality of “trafficking” of children that many French are unaware of. Especially in Haiti anyone can purchase a fake passport, a fake civil status for a handful of euros.

Haiti has signed the Hague Convention.  I have been associated in its drafting, but none of my proposals were accepted, with the argument that it was necessary to maintain a certain vagueness to continue adoptions. I wanted to include that poverty can not be used as a reason, while the words “economic reasons” are mentioned in 97% of cases.

This is the great absurdity of these adoptions: we will spend € 20,000 to remove a child from its parents, then with that money we could help his/her family to raise him/her. We are more and more to denounce these abuses; we will soon release a book in the United States with a group of 30 adopted writers (2).

(1) Magnitude 7.3
(2) Adoptionland: From Orphans to Activists