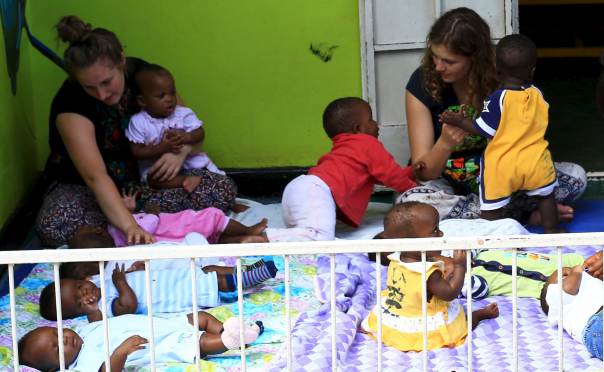 Leaked documents, court data and a series of exclusive interviews with officials, whistleblowers, victims and prospective adoptive parents has revealed:

Across Uganda church-backed orphanages and private child care institutions are springing up.

“Fifteen years ago there were just two dozen orphanages, now there are as many as 400 such institutions,” said Stella Ayo-Odongo, executive director of the Uganda Child Rights NGO Network.

“But this is steeped in problems. Intercountry adoptions constitute a booming industry in which child traffickers are profiteering,” she said.

According to Ugandan law, foreigners are required to spend at least three years in the country before adopting, but they can acquire a legal guardianship days after arriving and complete the process back home.

Data from the U.S. State Department shows that 201 children were adopted from Uganda by U.S. citizens in 2013/2014, making it the third biggest source country in Africa. In all, Americans adopted 6,441 children from around the world last year.

Uganda’s parliament is expected to pass tighter legislation that would ban legal guardianships, with a view to signing an international treaty, the Hague Adoption Convention, but corruption and bureaucracy have stalled the process, critics say.

“Uganda must ratify the Hague Adoption Convention urgently,” said Ayo-Odongo. “It was previously not an issue, but now, with levels of child trafficking at such a high level, it should be a priority.”

On a given day they can be seen hand-in-hand with white adoptive parents at the departure gate.

Many of these adoptions will lead to successful unions between the child and his or her adoptive parents.

But others will never make it this far.

In Uganda, a lack of available documents makes it impossible to determine how many adoptions involve fraud, but four government officials told the Thomson Reuters Foundation the problem was widespread.

“Some lawyers lie about the birth history of the child,” said Stella Ogwang, an official in the Ministry of Gender, Labour and Social Development, which oversees child welfare.

Another senior government official, who did not want to be named, described Uganda’s adoption system as “a racket”.

One of the lawyers known for handling intercountry adoption cases denied involvement in fraud, saying that the cases she handled involved orphans abandoned by their families.

Another lawyer, Peter Nyombi, said he was not aware of any fraud in the adoption cases he handled.

“We carry out extensive investigations into the background of the children,” said Nyombi, who is a former attorney general.

Data shows that a large proportion of the children put forward for adoption have surviving relatives.

A leaked study into foreign adoptions in Uganda, overseen by the Ministry of Gender, Labour and Social Development, found only a fifth of all adopted children it surveyed were orphans who had lost both parents.

The report, funded by the U.N. children’s agency, UNICEF and yet to be published, also found that biological parents and relatives gave up their children in the belief they would receive financial incentives from adoptive parents and children’s homes.

Many of them, the report finds, come to learn that their child’s identity has been changed fraudulently while in the institution, without their knowledge.

The report’s author, Hope Among, told the Thomson Reuters Foundation that securing access to court files took several months and certain files were withheld by the judiciary.

A court registrar, Muse Musimbi, declined to say why this was the case and said he could only discuss the matter with the court files in front of him.

“Before an application [for guardianship] comes to court, the child’s identity may have been changed several times by the lawyers or those acting for them in the child care institutions,” said the Ministry of Gender and Labour’s Ogwang.

Intercountry adoption is widely believed to be a lucrative business. Officials estimate a Ugandan lawyer can earn $30,000 during the adoption process.

Two lawyers involved in the process refused to comment on their earnings. Another lawyer, who did not want to be named, said he earns $4,000 for each case he handles.

Peter Nyombi said he earned less than $10,000 per legal guardianship.

“Thirty thousand dollars? I would be a very rich man if I were charging that amount,” said Nyombi, laughing.

Uganda’s per capita GNI (Gross National Income) was $600 in 2013, according to the World Bank, well below the average for sub-Saharan Africa.

A former High Court registrar said that some probation officers, on instruction from lawyers, were in the habit of fraudulently copying and pasting information from old documents to ensure the application would be rubber stamped.

“Some of our lawyers have gone to the extent of confusing parents and relatives of the victims to present forged information. They tell the parents to lie, to pretend to be dead, in return for small payments,” said Moses Binonga, coordinator of the anti-human trafficking task force at Uganda’s Interior Ministry.

The task of protecting children is made harder by the high levels of deprivation.

Twenty-four percent of Ugandan children under five live in extreme poverty, according to a 2014 UNICEF report.

One lawyer involved in the adoption process said this makes determining a child’s origins all the harder.

“Many of the children who are the subject of guardianship come from very disadvantaged backgrounds … where members of the family may not be educated and have records on the dates of birth or death of a parent,” said the lawyer, who did not want to be named.

Staff at some of Kampala’s child care institutions told the Thomson Reuters Foundation that many of the children are abandoned by poor family members who say they can no longer afford to care for them.

It was in one children’s home that a former social worker, who wishes to remain anonymous, first encountered what he believes was fraud.

He lost his job after accusing colleagues of falsifying documents in the files of three children.

“It was the job of the social worker to document the background of a child,” he told the Thomson Reuters Foundation.

“Sometimes my colleagues would change those files, so that the children could be sent out [for adoption by foreigners].”

On one occasion the social worker said he noticed paperwork showing that the three children had surviving biological parents or relatives. He believes the documents were removed while his back was turned.

“When I got back from holiday, the three children were gone,” he said.

The former employee said he tried to raise the alarm.

“The probation officers told me it was too late to intervene. That was when I realised I had made enemies inside the orphanage,” he said.

Moses Binonga, from the anti-trafficking task force, said corruption in the adoption system is widespread, but believes the American system is at fault.

“There are cases where we have discovered fraud in the adoption process. When we have complained to the U.S. government they have not returned those children [from America]; they say they are American citizens and cannot be brought back,” Binonga said.

“It makes us think there is a hidden agenda. The Americans are quiet on this,” he said, adding that the current system exposes children to child trafficking.

An official from the U.S. State Department said this was an “imprecise and misleading” description, because trafficking involved “intent to ultimately exploit the victim.”

But campaigners also point to a lack of transparency or follow-up of cases of intercountry adoptions which do not work out.

U.S. government figures for 2013/2014 show 91 out of 6,441 children adopted from overseas were abandoned or relinquished by their adoptive parents in America, ending up in state custody.

The Dutch government suspended intercountry adoptions from Uganda in 2012, because of what it perceived to be a lack of transparency in the procedure.

The U.S. State Department said it is not considering a ban on intercountry adoptions from Uganda.

“The Department of State believes intercountry adoption can provide permanent, loving homes to children in need when children cannot be cared for in their country of birth,” the State Department official said.

More than 200 U.S.-based adoption agencies, of which a number work in Uganda, assist American applicants to complete adoptions in their home state, but in a number of cases, the process stalls.

“America’s regulatory approach has proven short-sighted, for the failure to provide sufficient safeguards has created a system designed and destined to fail,” says David Smolin, Professor of Law at Samford University, Alabama.

“Under this ‘slash and burn adoption’ … too many adoption agencies with too much money to spend descend upon vulnerable developing nations, leading to abusive practices, corruption, scandals, and then closures,” Smolin said.

He speaks from experience.

Smolin adopted two girls from India in 1998 only to find they had been kidnapped by an orphanage and their mother was searching for them.

He says the problem is perpetuated by the fact that “adoptive parents are sometimes reluctant to report abusive practices to the State Department, based on fears of their agency, peer pressure from the adoption community, and fears that the child might be forcibly sent back”.

“Legal guardianships are recognised by the United States, they are recognised by its embassy in Uganda, so we are thinking if there is an opportunity to save the children, we can,” said Tendai Masiriri, vice president, Bethany Christian Services adoption agency, which has operated in Uganda since 2011.

“Children are suffering in orphanages, right?” he said.

Those involved in Uganda’s child welfare reforms blame the orphanages for what they see as their failure to investigate cases.

“Orphanages have their own agenda. They make up stories about children and cannot always verify information because they are not involved from the outset,” said Ogwang of the Gender and Labour Ministry.

Ogwang, an opponent of intercountry adoptions, believes the state shares responsibility for what she sees as deep seated corruption.

“The problem is with the system, you cannot blame the biological parents.”

By Tom Esslemont and Katy Migiro