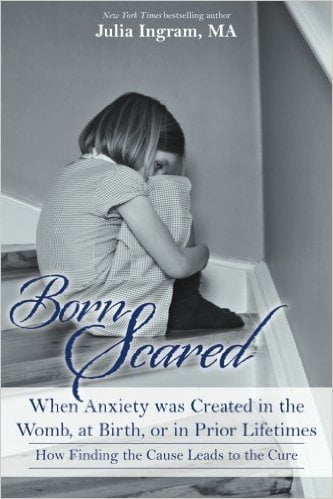 For those who feel as if they came into this world afraid, or whose child is fearful for no discernible reason and ask, “Why do I have this? Why is it happening to me or my child?” Born Scared provides answers. Through the use of fascinating case stories, hypnotherapist, Julia Ingram, demonstrates that when clients are prompted to go to the source of their fear, they find when and under what circumstances it was created. From there the path to recovery becomes evident and easy. Ingram’s clients found the origin of fears, phobias, eating disorders, low self-esteem and other limiting beliefs. A seven year old boy, afraid to have his mother out of sight, even for a moment, discovered the source of the fear originated prior to his birth, when his mother was critically ill. A woman who felt extreme guilt, akin to survivors guilt, but with no idea why, discovered it began as she watched her twin brother slowly die during their first trimester in the womb. A young man believed he should never have been born until he realized he was conceived by rape and during the grueling months of his gestation heard his teenage mother being shamed for his very existence. Fans of Ingram’s earlier books, the NY Times bestseller, The Messengers, and The Lost Sisterhood will not be disappointed. When she prompts her clients to go to the source of a problem, they will often regress further back than even their conception and report what they believe are past lives. A college student discovered the source of her fear of the dark and of closed spaces was a past life in which she was buried alive. A preteen girl found several lifetimes which explained her snake and bug phobias. What is astonishing, is that phobias were cured in a session or two, as compared to the lengthy and painful mainstream process of “exposure therapy.” A woman with anorexia came to understand her compulsive need to eat as little as possible, when she recalled being in a concentration camp in her prior life. Along with the stories, the author describes the variety of therapeutic (non-drug) tools she uses to help her clients recover. In a chapter called The Brave Girl: A Micro-preemie Who Survived All Odds, Ingram urges parents of struggling children to explore the myriad of alternatives there are to medicating a still-developing brain. There is a surprising variety of reasons for eating disorders, as well as limiting beliefs and self-sabotage. But with each story, once the origin was discovered, the client was able to change and grow. The final chapter is a three-step process for dealing with anxiety which readers can try on their own, or options to pursue to find additional help. Born Scared offers a new way of looking at lifelong anxiety (or nipping a child’s fears in the bud). It will help you be more compassionate towards yourself and those who suffer, and will bring hope to those who have been told, often unsympathetically, that their fears are irrational.

To buy the book visit Amazon.