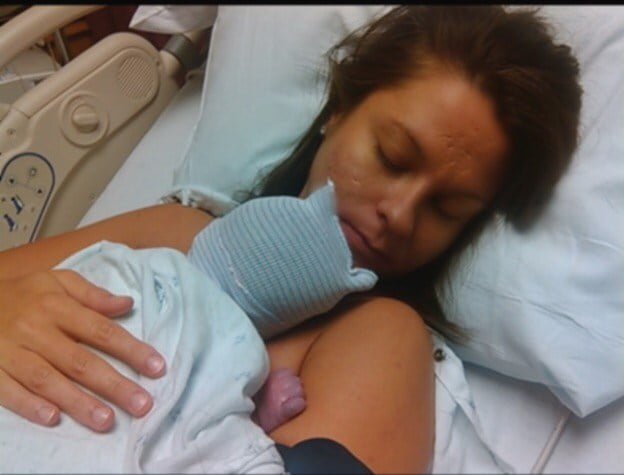 Kimberly Rossler says the most traumatizing experience of her life happened less than a month after she delivered her baby.

Rossler gave birth to James Elliot Rossler in May, but three weeks later, she said Sheriff’s deputies were knocking on her door to take the baby from her.

“They let me finish breastfeeding him, and I put him in his car seat, as I screamed and cried and watched them take my child away, with no answers whatsoever,” said Rossler.

Mother had doubts about adoption

Rossler said early in her pregnancy an agency called Adoption Rocks helped her get set up with an adoption attorney and an adoptive mother, but as Rossler’s pregnancy progressed, she said she started having doubts.

When she made up her mind not to give her baby up, Rossler said the attorney did not tell her what she needed to do to back out of the adoption.

“I tried to tell her numerous times and she just brushed it off like this was nothing, like this happens,” said Rossler.

Rossler said she only had a verbal agreement with the adoption attorney and adoptive mother that she would not be giving her baby away – nothing was on paper.

“I didn’t think there was any need to sign anything, because she (the attorney) told me that paperwork was not final until after he was born,” she explained.

Three weeks after James Elliot was born, Rossler said the adoptive mother had deputies take him from her, and she hasn’t seen him since.
It’s been several weeks now, and Rossler said she has no idea how her child is doing.

Chris Kalifeh, a spokesman with Adoption Rocks, said his organization was only a catalyst in the beginning, and has no involvement with this custody battle.

“It’s a legal process, and Adoption Rocks is not about that, we want to put people with people to make an informed decision,” said Kalifeh.

All the while, Rossler said she just wants James Elliot back.

“I finally had peace in my life, that I had this unconditional love I have always wanted, and to know that my child has been taken from me, and not even knowing what is going on with him,” she said with tears in her eyes.

The adoption attorney who worked with Rossler released this written statement about her involvement in the case.

It reads in full:

Recent news reports have misrepresented certain facts regarding my former representation of an adoption client.  Please allow me to set the record straight.  I wish I could go into full detail, but I am limited by my ethical duties to my former client to keep certain matters confidential.

First, my work on this matter was as a private lawyer and Adoption Rocks has no involvement in the matter.  Published reports have wrongfully suggested that Adoption Rocks was involved as an adoption agency, which is patently false.  Adoption Rocks is a non-profit organization which simply provides a venue (an office) where birth mothers who are experiencing a crisis pregnancy, can gain awareness of the adoption process and review profiles of families wishing to adopt.

Because it was apparent there might be a problem with the adoption, I withdrew from further representation of the adoptive mother in this matter on May 23.  Since May 23, I have had no involvement in this case.  I suggested to the adoptive mother that she retain new counsel, and I understand she did so.  I have had no involvement in the matter since the birth of the child.  Any suggestion that I was involved in the custody proceedings is false.

I continue to pray that his matter resolves itself in the best interest of the child.  Adoption is a wonderful alternative for a woman in a crisis pregnancy.  While the process can be difficult in some cases, it is a very rare occurrence, when an adoption becomes adversarial.