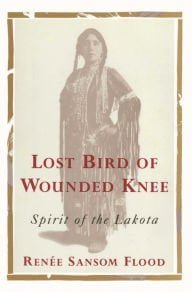 A Girl Called ‘Lost Bird’ Is Finally at Rest: History: Lakota infant survived Wounded Knee killing and was adopted by whites. Now she is buried among her people.

Today, she is lost no more.

A century after the infant was discovered alive, lying beneath her mother’s body on the killing fields of Wounded Knee, her remains have been brought home. In a traditional ceremony, Lost Bird was interred Thursday, near the mass grave where 200 slain Native Americans, including her mother, were unceremoniously buried Jan. 3, 1891.

On Friday, in a symbolic freeing-of-the-spirit ceremony, Lost Bird’s soul was liberated to reunite with the spirit of her people.

“It is a sad yet happy occasion,” said Pat Rowland, president of the Wounded Knee community, during a burial ceremony punctuated by the whinnying of horses, the smell of burning sage and the sound of weeping.

“It is a happy occasion because Lost Bird has finally come home to her people,” he said, “back where she belongs.”

The child was 4 months old when her mother was killed. The Lakota people, called Sioux by the whites, were by any measure already a conquered nation when the violence erupted at Wounded Knee Creek on Dec. 29, 1890.

Alarmed by the killing of Sitting Bull, a band led by Chief Big Foot was seeking refuge at the Pine Ridge Reservation when it was intercepted by the 7th Cavalry. The shooting started at the camp when the cavalry tried to disarm the Indians.

Some historians still insist that what ensued was a battle. But the general who was commander of the region at the time termed the violence a “cruel and unjustified massacre” and unsuccessfully sought restitution for the survivors.

The number of Lakota men, women and children killed has been put at 170 to 300.

The child later known as Lost Bird was one of the few infants to survive. Her mother’s body, shot twice, had protected her from the soldiers’ bullets. The infant had been tightly wrapped against the freezing winds and had a beaded buckskin cap pulled over her head.

“She was a living curio,” said Renee Sansom-Flood, an author who spent eight years researching Lost Bird’s life and tracking down her remains.

The child was raised mostly by Colby’s wife, Clara, a leader in the suffragette movement who “did everything in her power to help the child,” Sansom-Flood said. A photograph of the beloved adoptive mother was placed upon the coffin, beneath an Indian blanket, and buried with the remains.

In returning the body to Wounded Knee, Lakota spiritual leaders had the remains transferred from a hearse to a horse-drawn wagon at Porcupine Butte, the point where Big Foot surrendered to the cavalry.

The graveside ceremony was conducted in the Lakota language and in English before about 200 people beneath a blazing sun.

Religious leaders purified the grave site with burnt sage and planted small cherry trees, the symbolic trees of life, at the four corners of the grave and at its head.

“At one time, this was a peaceful creek,” said Jim Garrett, one of the riders who accompanied the coffin and a speaker at the ceremony. “No one really knew it except for the probably good hunting that was found here and the plentiful water and the plentiful shelter. But because of that fateful day in 1890 the whole world knows this creek today.”

Sansom-Flood, who is writing a book on Lost Bird and on events leading up to Wounded Knee, said Marguerite returned to South Dakota as an adult in futile efforts to find family members and discover her family name. For a time, she worked in Buffalo Bill Cody’s Wild West Show. She died at age 29 and was buried in Hanford, Calif.

“This is one lost bird and she’s going to go home to rest near her parents,” the French-Canadian Sansom-Flood said at the ceremonies.

A former social worker on Indian reservations, the author said in an interview that thousands of Native American children were taken from reservations and adopted by white parents. The practice continued until passage of the Indian Child Welfare Act in the late 1970s, she said.

“A lot of the adoptions didn’t work out,” she said. “There’s something missing . . . It’s hard to explain. It’s something spiritual. The parents would bond with the child, but the child wouldn’t bond to the parents.”

Her search for Lost Bird began when someone showed her a photograph of the child and Gen. Colby that had been found in an attic. She said she saw in the child’s eyes a look that she had seen in the eyes of other Native American children who had been taken from their families.

Marie Not Help Him, a Lakota woman whose uncle, Dewey Beard, survived not only Wounded Knee but also the Battle of Little Big Horn 14 years earlier, has formed an organization called the Lost Bird Society that she said will work to reunite adopted Native American children with their families and with their culture.

“We’re going to start working with other lost birds that we know are out there,” she said.