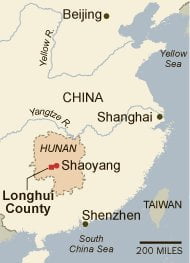 LONGHUI COUNTY, China — Many parents and grandparents in this mountainous region of terraced rice and sweet potato fields have long known to grab their babies and find the nearest hiding place whenever family planning officials show up. Too many infants, they say, have been snatched by officials, never to be seen again.

But Yuan Xinquan was caught by surprise one December morning in 2005. Then a new father at the age of 19, Mr. Yuan was holding his 52-day-old daughter at a bus stop when a half-dozen men sprang from a white government van and demanded his marriage certificate.

He did not have one. Both he and his daughter’s mother were below the legal age for marriage.

Nor did he have 6,000 renminbi, then about $745, to pay the fine he said they demanded if he wanted to keep his child. He was left with a plastic bag holding her baby clothes and some powdered formula.

“They are pirates,” he said last month in an interview at his home, a half-hour trek up a narrow mountain path between terraced rice paddies.

Nearly six years later, he said, he still hopes to relay a message to his daughter: “Please come home as soon as possible.”

Mr. Yuan’s daughter was among at least 16 children who were seized by family planning officials between 1999 and late 2006 in Longhui County, an impoverished rural area in Hunan, a southern Chinese province, parents, grandparents and other residents said in interviews last month.

The abduction of children is a continuing problem in China, where a lingering preference for boys coupled with strict controls on the number of births have helped create a lucrative black market in children. Just last week, the police announced that they had rescued 89 babies from child traffickers, and the deputy director of the Public Security Ministry assailed what he called the practice of “buying and selling children in this country.”

But parents in Longhui say that in their case, it was local government officials who treated babies as a source of revenue, routinely imposing fines of $1,000 or more — five times as much as an average local family’s yearly income. If parents could not pay the fines, the babies were illegally taken from their families and often put up for adoption by foreigners, another big source of revenue.

The practice in Longhui came to an end in 2006, parents said, only after an 8-month-old boy fell from the second-floor balcony of a local family planning office as officials tried to pluck him from his mother’s arms.

Despite a few news reports outside the Chinese mainland about government-sanctioned kidnappings in Longhui and other regions, China’s state-controlled media ignored or suppressed the news until this May, when Caixin, an intrepid Chinese magazine well known for unusually bold investigations, reported the abductions and prompted an official inquiry.

Zeng Dingbao, who leads the Inspection Bureau in Shaoyang, the city that administers Longhui County, has promised a diligent investigation. But signs point to a whitewash. In June, he told People’s Daily Online, the Web version of the Communist Party’s official newspaper, that the situation “really isn’t the way the media reported it to be, with infants being bought and sold.”

Rather than helping trace and recover seized children, parents say, the authorities are punishing those who speak out. Two of the most vocal fathers were detained for 15 days in Shaoyang on charges of soliciting prostitutes at a brothel. Released last month, the two men, Yang Libing, 47, and Zhou Yinghe, 34, said they had been entrapped.

Mr. Yang said he was constantly followed by government minders. Mr. Zhou said the village party secretary had warned him to stop talking to reporters about the abduction of his 3-month-old daughter in March 2003 or face more punishment. “They are like organized criminals,” Mr. Zhou said.

China’s family planning policies, while among the strictest in the world, ban the confiscation of children from parents who exceed birth quotas, and abuses on the scale of those in Shaoyang are far less common today than they once were. Even so, critics say the powers handed to local officials under national family planning regulations remain excessive and ripe for exploitation.

“The larger issue is that the one-child policy is so extreme that it emboldened local officials to act so inhumanely,” said Wang Feng, a senior fellow at the Brookings Institution who directs the Brookings-Tsinghua Center for Public Policy in Beijing.

The scandal also has renewed questions about whether Americans and other foreigners have adopted Chinese children who were falsely depicted as abandoned or orphaned. At least one American adoption agency organized adoptions from the government-run Shaoyang orphanage.

Lillian Zhang, the director of China Adoption With Love, based in Boston, said by telephone last month that the agency had found adoptive parents in 2006 for six Shaoyang children — all girls, all renamed Shao, after the city. The Chinese authorities certified in each case that the child was eligible for adoption, she said, and her agency cannot now independently investigate their backgrounds without a specific request backed by evidence.

“I’m an adoption agency, not a policeman,” Ms. Zhang said.

The Shaoyang welfare agency’s orphanage is required to post a notice of each newly received child for 60 days in Hunan Daily, a newspaper delivered only to subscribers in Longhui County. Unclaimed children are renamed with the surname Shao and approved for adoption. Foreign parents who adopt must donate about $5,400 to the orphanage.

Reports that family planning officials stole children, beat parents, forcibly sterilized mothers and destroyed families’ homes sowed a quiet terror through parts of Longhui County in the first half of the past decade. The casualties of that terror remain suffused with heartbreak and rage years later.

Yang Libing, one of the two fathers accused of soliciting prostitutes, said he was a migrant worker in the southern city of Shenzhen when his firstborn, Yang Ling, was stolen from his parents’ home in May 2005 when she was 9 months old.

“I don’t disobey,” he said last month. “I do what the officials say.”

Yang Ling’s parents had not registered their marriage. To keep the baby, the officials said, the elder Mr. Yang would have to pay nearly $1,000, on the spot. Otherwise, they said, he would have to sign away the girl with a false affidavit stating that he was not her biological grandfather.

“I was totally outraged,” he said, but “I did not have the courage to resist. They do not play by the rules.” He signed the document.

Yang Libing discovered the loss of his daughter during his monthly telephone call home from a pay phone on a Shenzhen street. “Is she behaving?” he asked cheerily. The answer, he said, made him physically sick.

After racing home, he said, he begged family planning officials to let him pay the fine. They said it was too late. When he protested, he said, a group of more than 10 men beat him. Afterward, the office director offered a compromise: although their daughter was gone forever, the Yangs would be allowed to conceive two more children.

“I can’t even describe my hatred of those family planning officials,” Mr. Yang said. “I hate them to my bones. I wonder if they are parents, too. Why don’t they treat us as humans?”

Hu Shelian, 46, another anguished victim, gave birth to a second daughter in 1998. Even though family planning specialists said couples in her area were allowed a second child if the first was a girl, she said family planning officials broke her windows and took her television as punishment.

After she had a third daughter the following year, they levied a whopping fine of nearly $5,000. When she pleaded poverty, she said, four officials snatched her newborn from her arms, muscled her into a car and drove her to the county hospital for a forced tubal ligation. Her baby disappeared into the bowels of the Shaoyang orphanage.

Xiong Chao escaped that fate. Villagers say he was the last baby that officials tried to snatch, and one of the few returned home.

“He has been to primary school for a whole year,” she said, “and he still cannot recognize one and two.”

Nearby is the tiny, dark room where, she said, she tried and failed in September 2006 to hide Chao from family planning officials. He was 8 months old, her son’s second child. Officials demanded nearly $1,000, then took him away when she could not pay.

His mother, Du Chunhua, rushed to the family planning office to protest.

There, as she struggled with two officials on the second-floor balcony, she said, the baby slipped from her grasp and fell more than 10 feet, to the pavement below.

Later, she said, as the baby lay in a coma in the hospital, his forehead permanently misshapen, officials offered a deal: they would forget about the fine as long as the family covered the medical bills for Chao.

Also, they said, the Xiongs could keep him.