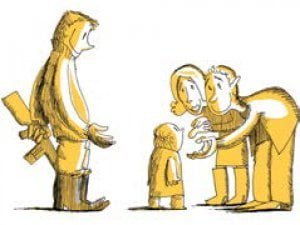 Lebanon’s history of illegal adoption is a long one, as old as its wars. Illegal adoption is, of course, a worldwide phenomenon. Missionary work targeting “orphans” and children “of unknown parentage” began as a result of global wars, famines and epidemics that have plagued humankind throughout history. It should also be noted that the issue of orphans and abandoned children has deep roots in the history of religions and at times, the life stories of prophets.

In Lebanon, the influx of Armenian refugees fleeing genocide during the Ottoman period was one of the main factors that led to the establishment of institutional orphanages. Most of the latter were affiliated to religious sects and based their activity on the notion of providing temporary care, until alternative families could be found to adopt the children. Earlier, one of the missions that provided care for orphans was that of Saint Vincent de Paul [Catholic]. In 1848, the mission’s Sisters of Charity nursery for “abandoned” children in [the Beirut district of] Khandaq al-Ghamiq was inaugurated. The Ottoman authorities also worked to set up a formal shelter for orphaned and abandoned children in its military barracks. After the fall of the Ottoman Empire, Beirut’s families gathered to set up an equivalent service, founding the Islamic Orphanage in 1922.[1]

The groundwork in the field of adoption, however, was laid during the French Mandate period. Agreements of cooperation (fraternity) between French missions and their counterparts in Lebanon facilitated the transfer of children to families abroad, particularly French ones. The work of missions in taking charge of “abandoned” children was thus legitimized. In 1960, the Sisters of Charity nursery, which became based in the Beirut district of Ashrafieh, took charge of the procedures of adoption in Lebanon and from Lebanon to foreign countries. Thanks to mandatory relations, France got the lion’s share of these types of adoptions. In the early 1970s, a number of new orphanages were founded, some of them facilitating the process of adoption, such as the French mission of the Sisters of the Good Shepherd.

If the State has Granted Certain Institutions Authority over the Process of Adoption, then Why Are We Discussing Illegal Adoption?

Since 1960, an estimated 10,000 Lebanese children were adopted into foreign families. Locally, the number of children remains unknown. Shrouded in extreme secrecy, this state of affairs has led most adoptees to live with unanswered questions or, even more often, with questions they dare not ask. The past ten years have seen many of those adopted abroad return to Lebanon in search of their roots. They represent the first generation of adoptees to have acted on the fundamental need to know the truth and understand how they were separated from their biological families. Such a trend coincides with a worldwide movement challenging the notion that adoption represents the best solution for children in need of alternative family care. The 1993 Hague Convention on the Protection of Children and Co-operation in Respect of Intercountry Adoption consecrated this awareness by stressing the conditions and ethics of adoption, especially across national borders, due to the flagrant tendency towards legal violations that resemble that of child trafficking.

Lebanon’s personal status laws are sect-based and wholly subjected to the authority of the clergy and to religious courts. Yet the ease with which children are separated from their biological families by illegal adoption, in and through Lebanon, is leading to problems that can no longer be ignored. That is what the UN Committee on the Rights of the Child (CRC) noted in its 2006 report on the situation of children in Lebanon. The committee pointed out the following:[2]

The Committee called on Lebanon to ratify the 1993 Hague Convention and enact secular legislation to govern the process of adoption.

The United Nations remarks are tantamount to an international recognition that the adoption procedures followed in Lebanon are illegal despite the Lebanese state’s decision to “legitimize” and privatize the process of adoption.

Analysis by NGO Badael of a number of adoption procedures obtained from individuals having returned to Lebanon in search of their origins, reveals three basic forms of illegal adoption:

“Abandoned” children are placed in such institutions based on written consent of the biological mother who renounces her right of motherhood, and pledges not to ask about the fate of the child. Most often, this document is drawn up at the office of a notary public, and the biological mother might receive a small amount of money to provide for herself for a short while. There are various reasons why pregnant women might not wish to keep their children, not least of which is the prospect of being single mothers in an oppressive patriarchal society. Some institutions offer them shelter during the last month of pregnancy and until delivery, after which the infant is put up for adoption. Despite the fact that receiving money for adoption directly relates to child trafficking, there is much evidence including bills and receipts, documenting the amounts paid by families seeking to adopt and by parties facilitating adoption. The latter justify such financial transactions with covering the costs of adoption and issuing identification documents –which might be understandable, had the cost of adopting some children not reached US$75,000.

Most often, this form of adoption does not require families seeking to adopt to come to Lebanon. Their application is processed by institutions in their home country affiliated with those in Lebanon. Once official procedures are completed, the children are sent abroad and picked up directly in the home countries of their adoptive families.

There are also indications that Muslim orphanages also facilitate illegal adoption, despite the fact that adoption is forbidden under Islamic Law.

Despite the scarcity of documentation, there are known cases of children adopted directly at the hospital of birth. In such cases, the family seeking to adopt come to the hospital during delivery and directly register the birth certificate in the name of the adoptive mother.

There are several documented cases of women, who were seeking to adopt, registering at hospitals as pregnant women undergoing delivery. Meanwhile, those actually pregnant would give birth without their names being mentioned in hospital records.

The biological mother would thus have her delivery costs covered and receive a small amount of money to provide for herself. Additional amounts would also be paid to ensure the secrecy of the procedure and the cooperation of the staff concerned, as well as to quickly obtain identification documents. This continues to happen today, and one such case concerning a child adopted inside Lebanon, recently became the topic of a television show. The latter documented the conclusion of an agreement for an adoption that took place at a Lebanese hospital in the summer of 2014, and in exchange for US$10,000.

The pregnant women concerned would often be foreign migrant workers who are unable to keep their child without losing their job. Some kind of mediator would also be involved in efforts to persuade the mother to give up the child, by filing the “abandonment” document with a notary public.

During the Lebanese Civil War, and in the period immediately following its conclusion in the 1990s, government authorities warned parents to be vigilant when walking outside with their children amid talk of child abductions. This indicated the occurrence of cases of child abduction for the purpose of adoption. There were also cases of infants kidnapped from the hospital at birth. One young Swedish man, for instance, turned out to have been kidnapped at birth in Lebanon when his biological family was unable to pay the hospital bills. The mother was told that her child had died, and her bills were paid. The young Swedish man returned to Lebanon to meet his biological family and find out the truth.

In the 1980s, a group of lawyers emerged as specialists in transnational adoption, in connection with a parallel network of services to persuade single mothers to give up unwanted children. The network would first offer to cover up the scandal and facilitate the process of delivery, and then provide a small amount of money for the mother to get back on her feet in exchange for the written consent document. The latter would most often end up being used to threaten the mother if she tried to obtain information about her child. This network of services would include the involvement of:

Many children seem to have had their birth certificates registered directly in the name of their foreign adoptive families, as was the case of a large part of those adopted by families from the Netherlands.

There are numerous methods of child trafficking through illegal adoption. Yet what they all have in common are direct violations. These include persuading the mother to give up her child, forging identification documents, cashing in fantastic sums of money, and failing to document the procedures followed. The information about the adopted child is thus concealed and difficult to obtain when one returns in search of one’s origins. The victims of such methods are many, but those most affected are the children themselves, as unofficial statistics indicate that:

Such methods leave the biological mother in a state of frightful anxiety, and in constant shame-tainted search for a piece of her womb and a shared memory of pregnancy. They also implicate adoptive families in legal violations that prevent them from telling their adoptive child the truth. It is high time those who profit from illegal adoption are exposed, and an end is put to a practice that has affected thousands of people in Lebanon and continues to be ignored.

This article is an edited translation from Arabic.

[1] See: Dr. Hassan Hallak’s, “The Role of Families and Associations in the Development of Lebanese Society”.[2] United Nations Committee on the Rights of the Child, Concluding Observations: Lebanon, CRC/C/LBN/CO/3, June 8, 2006.