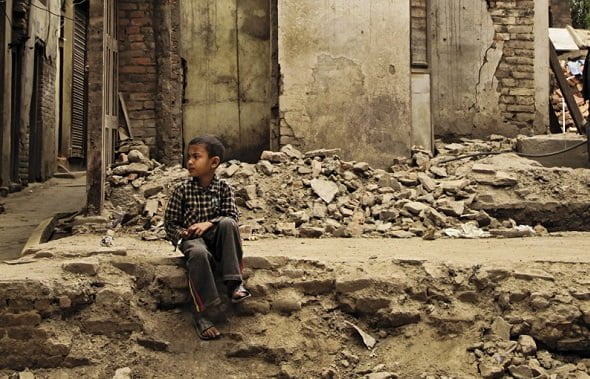 Unscrupulous fraudsters persuade vulnerable families to hand over their children – who then disappear into a flourishing ‘orphanage industry’. Fiona Broom reports on efforts to stop the child-trafficking trade.

Foreigners’ sympathy is being exploited in posters to recruit volunteers to work in Nepal’s orphanages. Next Generation Nepal – See more at: http://newint.org/features/2016/03/01/orphanage-industry-nepal/#sthash.5gdtRiql.cFx83ipt.dpuf

In Nepal’s remote mountain villages, an insidious force has for two decades been destroying young lives and tearing families apart. The devastation visited on these villages is no natural disaster, but one of human making. It usually comes in the guise of a well-dressed man carrying a briefcase and the promise of education and a new life for the children. But these children’s new realities are far from the dreams their parents held for them: behind the traffickers’ crocodile smiles lies a life of sexual slavery, forced labour, or destitution as a commodity in the huge orphanage industry.

Chhetra was nine or ten when he was taken from his village to a children’s institution in the capital, Kathmandu: ‘I was taken from my village to get a better education. When I reached the house where I would stay, I saw many children there. At first I thought it was not bad, but after one month, it was getting worse and worse. There was not enough food or clothing for the children. After a while, the food finished and we had to go to the street to beg.’

Child trafficking has been a scourge in Nepal since armed conflict between Maoist insurgents and the state began in 1996. To save their boys from conscription by Maoist rebels, families paid to have them taken to what they were told were safe homes in Kathmandu. Instead, children were presented as orphans, often being forced to live in squalour to arouse sympathy and donations from tourists.

But the lucrative orphan industry didn’t stop when the war, which cost about 16,000 lives, ended in 2006. International organizations heard that the groups of children dumped by traffickers outside Kathmandu checkpoints were orphans, and sent in volunteers to place them in homes. With foreign donations flooding in, the traffickers simply adapted their business model at the supply end of the chain.

‘Ninety per cent of the time it’s rural children being taken to urban areas,’ Jack Hogan, former communications director at non-government organization Umbrella Foundation, says. ‘They’re taken from isolated communities. Traffickers go where there are no schools or health posts, where there are no opportunities for kids. They approach the parents and say they’ll take their children to school in Kathmandu for a small fee, and promise they’ll be educated and earn money.’

Traffickers know exactly how to exploit the desperate poverty that leads parents to accept the false lifelines they’re offered. The promise that their child could become a doctor is enough to convince many that sending their child away is the best course of action.

When parents lose contact with their children, few can afford to travel to Nepal’s five major tourist districts, which house 82 per cent of institutions, to track them down. ‘These are not areas of need, they are [tourist] districts,’ says Martin Punaks, country director of child protection NGO Next Generation Nepal (NGN). ‘Is that a coincidence? We think not. That’s how the orphanage business works in Nepal – and it is a business.’

Krish was seven when he was trafficked to Kathmandu and its fraudulent Little Princes Children’s Home, but was one of the lucky ones to be found by his mother. Krish, now a recipient of an NGN scholarship, has helped reintegrate other trafficked children. ‘Poverty has become one of the major causes for many of the immoral and illegal acts prevalent in our society,’ he said. ‘Poverty creates such critical circumstances that one tolerates being far away from a loved one.’

There are now 700 registered and an unknown number of unregistered institutions housing more than 15,000 children in Nepal. About 85 per cent are believed to have at least one living parent.

‘The vast majority of children in homes don’t need to be there. That’s a fact,’ says Punaks.

Traffickers are equally adept at exploiting foreigners’ sympathies for substantial profits. The people working in Nepal’s child protection agencies are often motivated by their past complicity in the orphanage industry.

Conor Grennan and Farid Ait-Mansour established NGN after volunteering at Little Princes Children’s Home in 2005, where children were forced to pretend to be orphans. ‘When I hear stories of well-intentioned volunteers in Nepal unwittingly causing more trafficking by paying to volunteer in corrupt orphanages, it breaks my heart,’ Grennan said.

Umbrella founders Viva Bell and Dave Cutler discovered the manager of a home they were fundraising for was pocketing donations while the children were neglected and abused. Umbrella has since participated in seven orphanage raids with Nepal’s Central Child Welfare Board and rescued 391 children.

No child is too young in the traffickers’ eyes. Last year, NGN rescued a 17-month-old infant in one raid, and a two-year-old from another institution, which Punaks described as one of the worst cases the organization had seen.

NGN describes the devastating results of the good intentions of volunteers and donors as a paradox: ‘They volunteer their time and money to support needy children and develop a poor country, yet, in doing so, they are inadvertently keeping children away from their families, tearing apart rural communities, and fuelling a criminal and corrupt industry that ultimately prevents Nepal from developing.’

Late last year, for the first time a series of information evenings for foreign tourists was held in a Kathmandu bar. Punaks told the predominantly Western crowd that lingering colonial ideas of Western superiority led to an inflated sense of ability in voluntourists. ‘Nepal is incredibly complex,’ Punaks said. ‘There are incredibly intelligent Nepalis here who can’t solve the problems.’ He admitted that he too had been a naïve young foreigner who thought he could save the world.

Punaks and colleague Katie Feit were equally forthright in their comprehensive 2014 report ‘The Paradox of Orphanage Voluntourism’, which calls for foreigners to abandon the practice.

‘Orphanage voluntourism creates long-term attachment problems and psychological disorders for children, denies them their right to grow up in a family-based care setting, leaves them at risk of physical and sexual abuse, and fuels a corrupt profit-making trafficking industry,’ Punaks and Feit wrote. ‘It is not an ethical option in the vast majority of cases.’

Anti-trafficking organizations feared the chaos caused by last year’s earthquakes would leave displaced children vulnerable to traffickers, who could play on foreigners’ expectations that scores of orphans would be left in the wake of the disaster.

Inter-country adoption was suspended and travel agencies were asked to cease touting orphanage tourism. The government forbade children from crossing between districts without a guardian. The worst-hit districts were those already targeted by traffickers, due to their extreme isolation and poverty.

Umbrella established child-friendly spaces in those areas and registered children by name and photograph. A helpline run by the Child Workers in Nepal Concerned Centre (CWIN), received dozens of calls from earthquake-affected districts. Mobilizing its network of more than 350 staff, CWIN prevented 250 children from being trafficked.

CWIN’s protection programme manager Bharat Adhikari says that up to 40 rescued children are in the group’s care at any one time. They are temporarily housed in transit homes while CWIN staff trace their families.

Reintegrating trafficking victims into their communities is a core aim of many of the groups. Cultural barriers can pose problems – if a parent remarries, children are sometimes rejected – particularly for girls who have been forced into, or are suspected of, sexual acts.

‘With girls, it’s difficult, because in our society sometimes they’re not accepted back because of the issue of sexuality,’ Adhikari said. ‘If society does not accept the situation, we have to put them in an institution and provide education.’

Reintegration officers face the seemingly insurmountable task of finding families, armed with as little as a current photo of a child, who may be traumatized or taken too young to remember where they’re from. Officers walk for days to access remote villages located far from any roads. They gather information anywhere they can, often canvassing hundreds of villagers. And their success rate is staggering – just three of the 391 children Umbrella rescued are still unsure of where they came from.

Officers also carry out their task with the knowledge they’re targeting the businesses of dangerous people. Staff have received threats from traffickers to cease their work.

Punaks notes that Nepal’s legal system isn’t capable of dealing with the scale of the problem, while CWIN’s Bharat Adhikari argues that laws, regulations and policies need to be strengthened, though he admits it’s difficult to enforce laws.

Robust legislation, political will to support prosecutions, and awareness about trafficking at home and abroad will be necessary to curb child trafficking in the future. But equally important is the passion of some of Nepal’s youngest citizens to secure the best possible future for their communities.

Following last year’s earthquakes, trafficking victims reintegrated by Umbrella turned out in devastated regions to labour through the heat and destruction to protect displaced children. ‘The Umbrella kids I met were all smiles and happy to be helping,’ Hogan said.

In one of the districts hardest hit by the earthquakes, young people are volunteering to board outbound buses to check for unaccompanied children or those travelling with a non-relative, acting as the ‘gatekeepers’ to protect vulnerable children.

When Punaks took the reins as NGN country director, he penned a missive in which he said he feared combating child trafficking was an ‘impossible task’. But he realized he had, all around him, a commodity that could be the desperately needed change: young, idealistic Nepalis. ‘They risk their lives in the mountains searching for families, and they work late into the night to prepare important reports,’ Punaks wrote in 2012. ‘It is then that it hits me that they are the answer I have been looking for. Our plan for NGN needs to empower more Nepalis like them… to empower families, ordinary citizens, NGOs and the government to be the change that stops child trafficking.’

Fiona Broom is a freelance journalist based in Kathmandu, Nepal, with intermittent trips to Lebanon to practise her rusty Levantine Arabic. Fiona focuses her work on human rights and environmental issues.