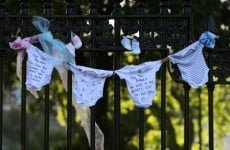 HAVING BEEN BORN in a mother and baby home, I am among perhaps a few hundred members of the active adoption community. But there are also about 50,000 silent adoptees in Ireland today, mostly aged 45 and upwards.

At present, all natural mothers are “protected” by the constitutional right to privacy,

Many do not want it. But some need it.

I know one elderly lady who is married to an abusive drunken husband. For over 45 years, she has dreaded him finding out she gave birth to a baby in her teens. She knows he would beat her to a pulp if the truth came out – and not just once.

She dreads the post, the phone ringing, the unexpected knock at the door.

Currently one in 20 of natural mothers who have registered with the voluntary national contact preference register have indicated they do not want contact with their own sons and daughters.

Minister James Reilly last week published a new Adoption Bill that will give adopted children the right to access their birth records. The legislation is important and rightly signals the end of an era where adopted people were treated as second-class citizens.

But what about the constitutional right to privacy of the natural mothers, many of whom live in fear of being found out? Well, the final compromise between adoptees’ right to know their mothers and the Supreme Court’s precise definition of “privacy” is to require adopted adults to sign a “no-contact veto”.

We would be required to sign a piece of paper stating that IF our natural mother wants no contact, we will respect their wishes. There are no sanctions or penalties attached to breaching the veto.

At present, the campaigners within the community number about 50 involved to varying degrees from keyboard warriors to those of us who turn up at everything. And we are having a frank exchange of views, as they say.

At the moment, I’m the bad guy to a few of the real campaigners and the armchair activists, because I agree with the no-contact veto.

Between the legal quagmire and the moral issues, I can see no other way forward. Although I know that while our natural mothers are losing their anonymity (wanted or not), many of them will still want their privacy. I respect that.

The adoption community agrees that no one can or should force contact onto a person who does not want it. But who speaks for those who cannot speak out because of fear? Because of the horror they went through in hellhole mother and baby homes like Tuam, where 800 of our crib mates ended up in one of several mass graves around the country.

Who speaks for those who may have caught reports in the newspapers or seen the TV news reports on Monday evening? Or heard gossip locally?

I speak only for myself but I refuse point blank to fight the no-contact veto. If it gives even one frightened, elderly women – a full and equal member of our community, active or silent– a scrap of peace, then that’s the least I can do.

Are we as a community so self obsessed that even after winning open birth certs, most information from our files and medical records and 90%+ of everything we’ve fought for, we cannot find the generosity of spirit to leave something to those of our own mothers who live in dread?

At a time like this, we need to think of our whole community including the most vulnerable and the substantial number of natural mothers silenced by dread.

The irony of this whole debate is that there is a legal way to get your birth certicate right this minute that all of the activists have used, and no one even has to sign this veto. It’s voluntary as well as carrying no sanctions, and it gets us around the legal quagmire. But that’s still not enough for some people.

There are several issues in the bill that I’m deeply unhappy about, including the one-year lead-in. How many of our community will die between now and 2017 when it comes into effect? For those hundred and possibly thousands who desperately wish to reunite, that lead-in will be a death sentence.

I know where some of my battles lie ahead. I also regret that one huge matter has been overlooked in all this controversy. After this bill is passed, illegally, de facto and informally adopted people will finally be treated equally alongside legal adopted people.

No one has the right to force contact onto another person, regardless of whether or not their birth children have been adopted. I’ve already signed the veto in my heart and I will abide by it. I may be the bad guy to the outraged me feiners in the community right now, but I’m not so bad that I will deny even one frightened lady her right to privacy if that’s what she wants – or needs.

Paul Redmond is the chair of the Coalition of Mother and Baby Home Survivors, though he is writing here in a personal capacity. He was born in the Castlepollard mother and baby home and adopted at 17 days old.

For Paul Remond’s contribution in Adoptionland: From Orphans to Activists, visit here.