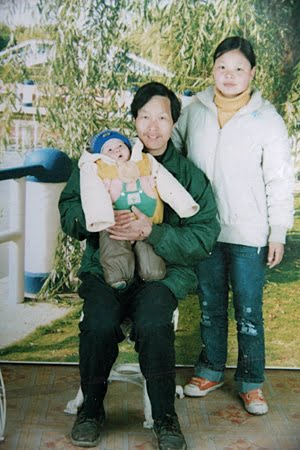 Forty-seven year old Yang Li Bing puffs on a cigarette as he shuffles through photos of a daughter he hasn’t seen in seven years.

“After she was taken in 2004, I could hardly sleep and I asked my wife if we could have another. But losing Yang Ling was too difficult,” he says. “My wife left me.”

Yang is one of many poor farmers in the remote village of Gao Ping  in China’s Hunan province, where residents say the family-planning officials who enforce the country’s one-child policy have seized at least 20 babies and sent them to orphanages to be adopted abroad.

Yang says he has little faith in the Communist Party’s ability to investigate misconduct by the local officials. After Yang went public with his story, other farmers came forward. The incidents all happened between 2002 and 2005.

At the time, Yang — like many poor farmers — was working far away in a factory in Guangdong province when he received a call from his father.

“As soon as I was told they had taken Yang Ling, I rushed back to Hunan and went to the family planning office. But they told me I was too late. My daughter had been adopted by a family in the United States.”

Yang argued that he was not in violation of the one-child policy, he says. His one-year-old daughter was his only child.

“An official told me to stop complaining, that I was still young enough to have another child,” he says. “When I kept demanding they return my daughter, several uniformed people in the family-planning office took me outside and beat me.”

Another villager, 40-year-old Zeng You Dong, tells a similar story. With four daughters, Zeng admits that he was in violation of the population control law. In the Chinese countryside, many farmers keep trying to have children until a son is born.

Zeng says his second and third daughter were twins. Shortly after their births in 2002, he and his wife decided that Zeng’s brother could take care of the elder twin.

Zeng was also away working when his brother called to say the one-child-policy officials had swarmed the house and used force to seize the girl.

“When I returned, they said I could pay a fine to get her back. Then they doubled the fine, later they tripled it,” Zeng says. “In the end, I couldn’t pay and they told me it didn’t matter: She had already been sent from the orphanage and to a foreign family, probably Americans.”

Couples in the United States, where demand for foreign babies is highest, have adopted more than 70,000 Chinese babies since the early 1990s. Spain is second, followed by Canada, now home to more than 11,000 babies from China.

It is nearly impossible to determine how many adoptions consist of children stolen from their birth parents. After a similar scandal in 2005 in a different part of Hunan province, a study in the Cumberland Law Review determined that as many as 1,000 babies had been kidnapped and sold to orphanages for a finder’s fee worth a couple hundred dollars per baby. A Chinese orphanage owner who was later sentenced to prison was found to be using the adoption profits to open a number of private old-age homes.

Foreign couples often pay up to $35,000 in a variety of administrative costs and fees to adopt a Chinese child. But where the money flows, and how the various agencies and middle men in the adoption process get paid, is difficult to track. One thing is certain: That kind of money being paid to orphanages in China’s poorest provinces creates a strong incentive to produce babies for foreign adoptions.

Apart from the cash incentive, family-planning officials operate under a great deal of pressure and are expected to meet population control quotas.

This latest baby-trafficking scandal to hit Hunan has a different twist: Family planning officials are accused of abusing their power to designate babies as “abandoned” despite evidence those babies were still wanted by their parents.

Furthermore, it appears those officials also used their administrative power to give the babies new identities. In this case, all 20 babies in question were re-named “Shao,” a reference to Shaoyang, the city closest to where the children were abducted. By changing their identities and processing the stolen children through legally recognized orphanages, the chances of any impoverished Chinese parent ever finding their child are almost nonexistent.

Farmer Yang says officials forged a document claiming he voluntarily gave up his daughter. But Yang can’t read or write. Though uneducated, he has a rustic eloquence when he describes the stealing of children from his village as a violation of basic law and human rights.

“I know she probably has a better life in the United States, but she was never an abandoned baby. I loved her, and I still love her and I want her back.”

After agreeing to be interviewed by CBC News, Yang was apprehended by police and held for several hours. He and the other villagers were warned not to talk to any foreign journalists. Despite being beaten for raising a fuss about his stolen daughter, Yang remains defiant.

“Kids are not products,” he says. “Not everything made in China is made for export.”

The front featured photo:  Yang Li Bing holds his daughter, Yang Ling, who he alleges was taken away by authorities. ((Anthony Germain/CBC))