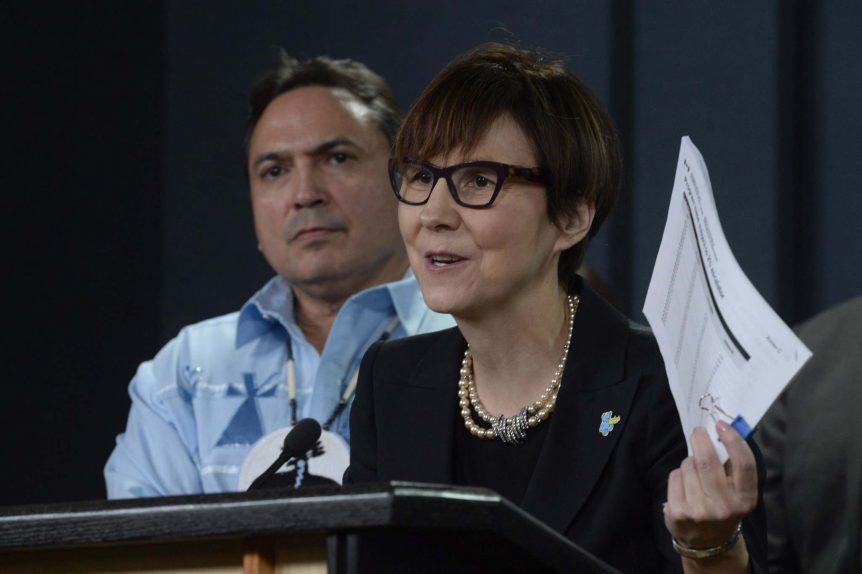 Conference in Winnipeg focuses on needs of First Nations children

A national advocate for First Nations children wants Manitoba to come clean on what it’s doing with federal child tax credits when kids in the province are put into care.

“We’re talking millions and millions of dollars… I don’t know what the exact amount is in Manitoba,” Cindy Blackstock, the executive director for the First Nations Child and Family Caring Society of Canada, said in an interview with the Free Press.

Most provinces set aside the federal child tax credits in separate trust funds for wards when they age out, or put them in collective funds to be used for extra tutoring, summer culture camps and the like.

In Manitoba, the money is commonly referred to as a special allowance, but indigenous child and family service agencies have long complained they don’t know what the province uses the funds for. The practice is called a “penalty clawback.”

A provincial spokesman said the province is expected to comment on the practice but no comment was issued Tuesday.

Considered an influential voice for social justice and indigenous issues, Blackstock came to the public’s attention when she confirmed Aboriginal Affairs and Northern Development Canada, under former prime minister Stephen Harper, had used surveillance to listen to conversations following a human rights complaint filed by her and the Assembly of First Nations.

Her tribunal victory sharpened her focus on racial discrimination against First Nations children in Canada, including in Manitoba.

“That money is allocated for the child themselves,” Blackstock said.

“Parents are given it to be able to (spend) on a child. In my view, that money is a kid’s money, especially when we’re talking about the most disadvantaged children.

“That money should not be used to subsidize government budgets,” she said.

This year, under changes by the Liberal government under Prime Minister Justin Trudeau, child tax credits will be paid in a single cheque worth $6,400 for a child under age five and $5,400 for children under age 17 in families with $30,000 or less in annual income.

Today, Blackstock is expected to outline her concerns over First Nations child welfare at a conference hosted by the Assembly of Manitoba Chiefs running Tuesday through Thursday at the Marlborough Hotel.

The Bringing Our Children Home conference is expected to focus on community-based strategies based on the Truth and Reconciliation Commission recommendations and Blackstock’s Canadian Human Rights Tribunal ruling.

In January, the tribunal found Canada racially discriminates against First Nations children by underfunding child welfare services on reserves. It said the practice must stop.

Manitoba has more than 10,000 children in care, and about 90 per cent of them are indigenous, meaning Manitoba First Nations have the highest rates of child apprehension in Canada. Apprehension refers to a policy of last resort, where children are removed for their own safety from their families and often their communities.

“Child welfare and the institutionalization of children is a billion-dollar business in our province. This system feeds children into other institutionalizing industries such as justice, health and (social) services,” Cora Morgan, AMC’s First Nations child advocate, said in a statement to announce the conference.