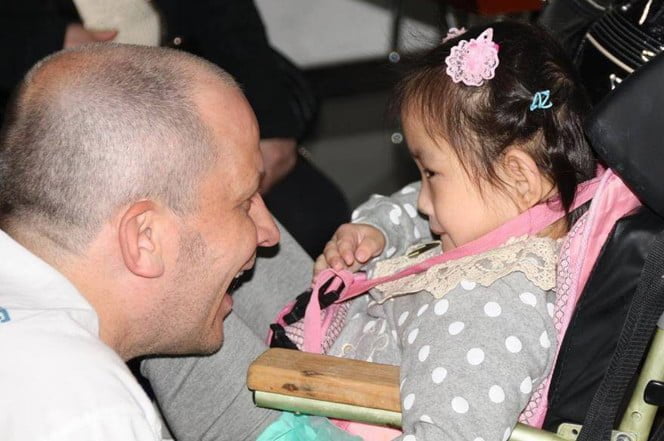 A couple who adopted an 8-year-old girl from China knew she had special needs — but they claim they were duped by a Morningside Heights adoption agency about just how dire her health situation really was.

Robert and Amy Meeker were aware that little Kaitlyn had spina bifida — a birth defect of the spinal cord — when they began the process to adopt her in 2013.

But they say nonprofit agency Starfish Children’s Services deliberately covered up the girl’s more serious health conditions in order to find her a forever home, according to a new lawsuit filed in Manhattan federal court.
Carys also engaged in episodes of “self-harming” and has a shortened lifespan due to all the illnesses, the couple says.The suits says the Texas couple came to find that the girl, who was renamed Carys by the Meekers, is blind and deaf and suffers from hepatitis C, severe epilepsy, scoliosis, cerebral palsy and other illnesses.

The Meekers say in court papers that she should have instead been adopted to an “end of life family who were ready, willing and capable of providing end of life care and burying a child.”

The Dallas parents, who also have a biological child and three other adoptees with special needs, allege that Starfish staff purposely withheld crucial information about Carys.

In a September 2013 email, board member Patrick McLaughlin wrote an agency worker, “This kid was born with enough millstones around her neck. Let’s not add another stone in the form of ‘buyers [sic] remorse’ by the adoptive family,” according to court papers.

McLaughlin is also accused of callously urging the worker to separate herself from the adoption process.

“You are an advocate for K [the child],” he wrote in the same email. “You are not an advocate for the parents at this point in the process. For better or worse, Starfish has done it’s [sic] job and the family takes over accordingly.”

The couple estimates the cost of Carys’ care will balloon to millions of dollars — and they’ve already spent more than $500,000, the suit says.

They’re not seeking to revoke their adoption but admit that had they known the full extent of the girl’s needs, “they would not have completed their adoption, as they did not — and currently still do not — have the capabilities to care for a child with such needs,” the suit says.

The family’s lawyer, Dean Gresham, called the situation “the most egregious conduct that shocks the conscience that I’ve ever seen in my 20 years of litigating.”

Starfish board director Michael Bosmann and other members did not return messages.