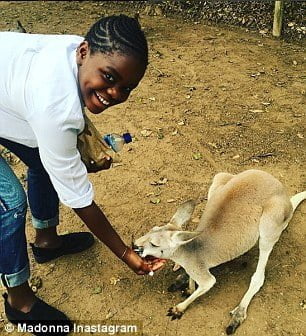 Madonna may have finally gotten over her rift with son Rocco, but it looks like there’s a storm brewing in regards to her adopted Malawian daughter Mercy, who recently turned 10.

Agatha Molande, the best friend of Mercy’s biological mother, Mwandida Chekechiwa, a teenager who died just eight days after giving birth, is coming forward to say that Mercy’s biological family wants her back and that they did not want her to be permanently adopted in the first place, reports Daily Mail.

Madonna adopted Mercy in 2009 amid much controversy. Despite the usual requirements in Malawi that you needed to be a resident of the country for 18 months, the High Court decreed that the pop star did not to fulfill that requirement.

Agatha is now claiming that the controversial adoption will likely cause problems for the “Holiday” singer in the future.

“The Mercy situation is potentially a bigger problem than the custody battle [over Rocco]. Madonna may have been acting in good faith believing she was saving a child from poverty and death, as she may not have been told the whole truth,” said the now 25-year-old.

Agatha went on, “It is difficult to put into words the love Mercy’s Malawian family have for her.”

 The friend also said, “They love her so much and never intended to be permanently separated from her. For them it is a battle they will not stop fighting. Madonna needs to understand that as Mercy grows older and becomes aware of these things it may not be good for her and all parties concerned.”

Mercy was born in January 2006 but placed in an orphanage after her mother died because her immediate and extended family could not care for her. Agatha claims that the family, “had an agreement with the orphanage that Mercy would return to them upon reaching the age of six since in Malawi children are thought to have developed immunity from disease once they pass the age of five.”

She continued, “It is normal practice here for orphanages to operate as care homes for children below that age and then return them later”

But Agatha explained something went wrong, “Somehow it seems to have been wrongly interpreted that by putting her at an orphanage they no longer cared for her, or that they were happy for her to be adopted, which is totally incorrect.”

But it isn’t just Agatha, who is a nurse in Malawi, that wants Mercy back. The child’s maternal grandmother, Lucy Chekechiwa, says that Madonna used the men in her family to broker the deal.

“I always said no to Mercy being taken away, but Madonna used the men in the family [my ex-husband and son’s or Mercy’s grandfather and uncles] to force me to accept by lying to me that I will have visitation rights.”

Lucy, who lives in a mud hut at Thondwe Trading Centre, outside Zomba, says she refused to sign off on the adoption but was was told Mercy would be back. “They said after she gets educated she would come back to me,” said her grandmother.

Her grandfather Saxon Maunde now says that if he’d been told he’d never see his granddaughter again he would not have granted Madonna and the courts permission to adopt her.

Her grandfather told Daily Mail, “We were told our child is being taken to be given an education and that when she finishes school she will return to us. We were also told that we would be in constant touch with her but it was an empty promise.”

He also added, “We never got any money from Madonna or from anyone. But we were happy for what we thought was a favor offered to us in good faith to have our child educated.”

However, a spokesperson for singer clearly stated these claims are not true. “Mercy has never had her past or her heritage hidden from her and she visits Malawi every year to learn about her roots and to visit friends and family,” the spokesperson said.

“Inaccurate stories about Mercy’s adoption harm no one more than the child herself,” read the statement.

Source:  Family of Madonna’s adopted Daughter, Mercy, says they never wanted to give her up.