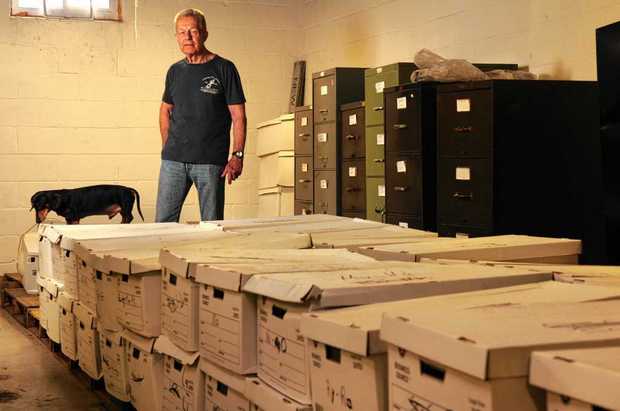 Inside them are about 1,000 files carrying information about Central New Yorkers who were adopted over the past 20 years – their medical histories, their adoptive parents’ finances, and in some cases the identities of their birth parents.

They’re the remnants of New Life Adoption Agency since it dissolved two years ago. For two years, a lawyer hired by the agency has sought a government agency or private adoption agency to inherit them. No one’s willing.

Lahm had no connection to New Life other than owning the building that housed the agency for its final seven years. He said he wants to make the files available to the people whose lives are detailed in them.

Anyone who adopted children through New Life and wants their file can call Lahm’s office at 315-472-3434, make an appointment to present proof of identity, and take their files, he said.

“It’s in the public interest,” Lahm said. “If nobody else will take responsibility, parents should.”

But New Life’s former lawyer, Golda Zimmerman, contends it would be a crime for anyone to disclose some of the information in those files, including the names of the birth parents.

“The law forbids anyone from disclosing adoption files – state agency people, lawyers, anybody,” without a court order, she said. She initially cited a section of the state public health law. But that section refers to anyone disclosing HIV-related information. It makes no mention of adoption files or information.

Later, she cited a section of the state domestic relations law that prohibits anyone, including the lawyer for adoptive parents, from disclosing the surname of an adopted child at birth. But that law only says violators would face civil, not criminal, penalties.

Either way, it won’t stop Lahm.

“Then they’ll have to charge me with a crime,” he said. “I will do this to protect these kids and the birth and adoptive parents’ information. I don’t want these files to end up in a landfill.”

The boxes are taking up space that Lahm needs for storage in the basement of his building at 711 E. Genesee St., he said.

Edward Fintel, a lawyer appointed to handle the dissolution of New Life in 2011, has been trying for two years to get the records into the hands of another adoption agency or the state. He wrote and called all 90 authorized adoption agencies across New York state.

He wrote a letter in April to Gladys Carrion, the commissioner of the state Office of Children and Family Services, detailing his efforts and asking for help. She has not responded.

Jennifer Givner, a spokeswoman for Children and Family Services, said the agency isn’t authorized to take the records. But it worked with Fintel for a long time trying to find the appropriate repository, she said.

Zimmerman, New Life’s former lawyer, said she also went out of her way to try to find another agency to take the files. And the agency sent out emails to all of its clients two years ago, telling them that portions of the files could be released to them on certain dates. A lot of parents showed up — Zimmerman doesn’t remember how many — but lots of files remained.

Fintel enlisted the help of state Sen. John DeFrancisco, who brought Catholic Charities on board. That agency, along with an authorized adoption agency out of Rochester, were close to agreeing to take the files, he said.

But in the end, none of the private agencies were willing to bear the expense of having to maintain the files and deliver them to people when needed, he said.

Fintel, who was hired by New Life’s board of directors to get a court order dissolving the agency, said he attended meetings with state Supreme Court Justice Donald Greenwood, Onondaga County officials, and people from the offices of DeFrancisco and state Assemblyman Bill Magnarelli.

“Everyone either had no room or financially it was a manpower issue,” Fintel said. “I’ve spent a lot of time trying to place these files.”

Neither he nor Lahm have looked to see what’s in the files because they assume they’d include confidential information, they said.

Zimmerman said she’s frustrated that no other adoption agency or the Onondaga County Department of Social Services would not take the files.

State laws don’t offer any help, she said, such as a requirement that the government take custody of the files. DSS would be the most logical place for them, she said.

“I have become as creative as I can, using all my years of experience to try to think of someone who might take these,” Zimmerman said.

Lahm said he’s asked Zimmerman to take the files. But she said she can’t because she no longer has legal authority. She blamed the state Office of Children and Family Services for not having the county DSS do more.

Onondaga County Attorney Gordon Cuffy said the law does not allow for either DSS or the county clerk’s office to take the files, as Fintel requested. On top of that, there are no public funds available to store and maintain them, Cuffy said.

The government taking over a private agency’s files would amount to a gift, and the county could not do that, he said.

“They totally washed their hands of it, and these are the people who are entrusted by the statute to oversee adoption work in this state,” Zimmerman said.

Greenwood tried to get the problem solved, but didn’t think he had the legal authority to order DSS to take the files, Zimmerman said.

State law says the files are supposed to go to another authorized adoption agency, she said.

“But the people who are available under the statute do not want to step forward,” Zimmerman said.