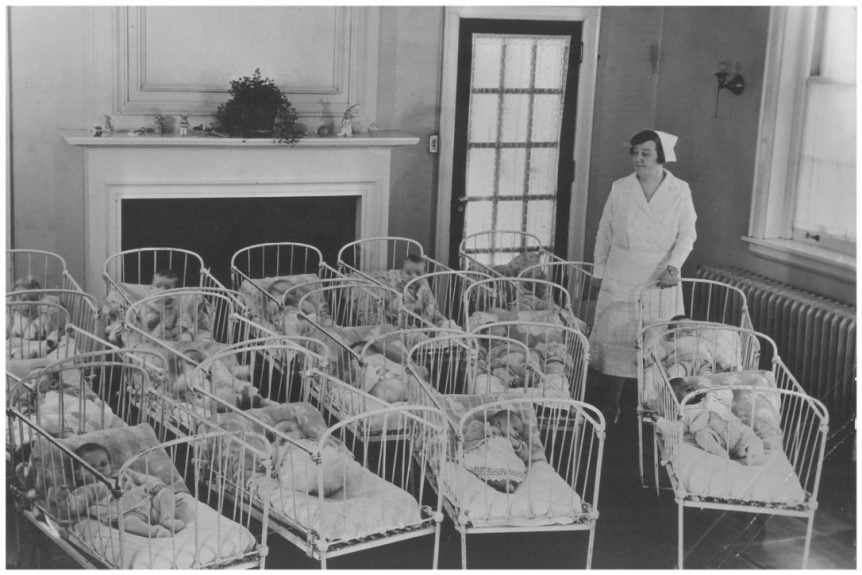 Hundreds of thousands of unmarried mothers were systematically and often violently separated from their babies simply because of their marital status.

Many Canadians are unaware that in the immediate postwar decades, federal and provincial governments funded draconian adoption policies that harmed unmarried mothers across Canada. This is being referred to by scholars as the “adoption mandate” or the “Baby Scoop Era.”

Unmarried mothers in the hundreds of thousands were systematically and often violently separated from their babies by means of adoption in Australia, New Zealand, U.K., Canada and the United States, simply because of their marital status. In Canada, more than 350,000 unmarried mothers were impacted by the mandate from 1940 to 1970.

During this period, more than 60 church-run and government-funded maternity facilities operated in Canada, managed by mainstream religions including Catholic, Anglican, United, Presbyterian and Salvation Army.

Once placed in a maternity home, it was unlikely an unmarried mother would leave the experience with her baby. In these facilities, adoption rates were as high as 96 percent, while rates for surrender in Ontario outside of maternity homes were about 76 percent during the 1960s. This is in contrast to today, where unmarried mothers relinquish their babies for adoption at the rate of approximately 2 percent.

Maternity facilities were quasi-in carceral settings where unmarried mothers were confined for three to five months of their pregnancy until they gave birth.

The environment was punitive and shaming. To be “rehabilitated” or “redeemed,” the penance for the sin of out-of-wedlock pregnancy was the relinquishment of the baby for adoption. Women confined in Canada’s maternity homes report being subjected to physical, sexual, psychological and emotional abuse.

Unmarried mothers from maternity homes were routinely dropped off at hospital to labour alone, their file indicating “MISS” or “BFA” (Baby for Adoption) instigating hospital protocols for unmarried mothers prior to the signing of consents.

Mothers were prevented from eye contact with their babies in delivery rooms by use of sheets, pillows, aversion of mirrors, or other means, in order to “prevent bonding” — ignoring the fact these mothers were already bonded to the baby they had carried for nine months.

Mothers were routinely denied their right to see, hold and feed their babies after birth. Some were told their babies died, only to learn their child had been adopted when their child sought them out years later for a reunion. Others still do not know if they delivered a boy or a girl.

Mothers report the use of threats, fear, duress, lies, trickery and even physical force to obtain uniformed consents, with no legal counsel, many signing alone, with only a social worker or two in attendance. Mothers were routinely not given a copy of any paper signed and were usually not informed of their right of revocation.

Mothers were returned to the community immediately after birth, still recovering from childbirth, in shock and traumatized from the harsh treatment and loss of their baby, told to keep the secret, never to tell their future husbands, and provided no counseling or aftercare.

Many of these mothers continue to live with the stigmatized identity of an “unwed mother” and continue to “keep the secret.”

These women must be acknowledged. A Senate inquiry or Parliamentary committee to investigate these matters, such as the one held in Australia, is called for by these mothers, now in their 60s, 70s, and 80s.

A parliamentary committee will serve to inform those children separated from their mother by adoption that they were loved and wanted; not abandoned. It may serve to reach out to those who continue to hide in shame and secrecy and who may not know about the support services available to them today.

An inquiry will also validate the lifelong psychological and intergenerational damage to families caused by these practices, and may serve to facilitate affirming and healing reunions, and repatriation to Indigenous status lost in the adoption transaction.

It can also raise awareness for the need for transparency in adoption records still closed in PEI, New Brunswick, Nova Scotia and Quebec, and Northwest Territories.

At the very least, it may serve to provide those impacted by the mental health services they were denied so many years ago.

The front featured photo: An archival photo shows babies born at Humewood House, a home for unwed mothers in Toronto. Valerie Andrews writes there should be an inquiry into the government adoption policies in postwar Canada. (HUMEWOOD HOUSE PHOTO)