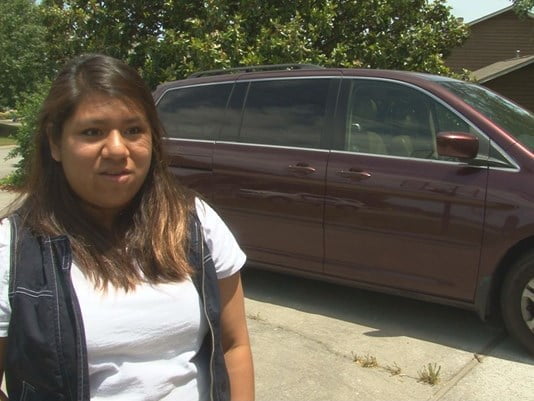 A Knox County mother wants answers after her adoptive daughter from Guatemala was denied a driver’s license permit twice.

16-year-old Emily Williams is eager to get behind the wheel in East Tennessee. She’s been studying hard and practicing often to hopefully get her drivers permit soon.

“I’ll be like a normal teenager, who will be able to hang out with friends so it will be exciting,” Emily shared.

Emily, originally from Guatemala, was adopted by her mother Cheryl Williams when she was about 1-year-old.

She is a US citizen, according to the Child Citizenship Act of 2000; however, she’s been denied a driving permit twice and told she needs more proof.

“I did everything I was supposed to do. I studied. I was nervous as I was going in there,” Emily said.

When she visited the driving services office, they told her she couldn’t get a driving permit until she provided a Certificate of Citizenship, a document that costs roughly $600.

“She said we can’t take this as proof of citizenship, she needs a Certificate of Citizenship and I said, well no she doesn’t,” Emily’s mother, Cheryl, shared.

Cheryl referenced the Child Citizenship Act of 2000, which says if a child is adopted by an American they automatically become a US citizen the moment they step on US soil. In Emily’s case, she’s been a citizen for nearly 17 years.

“Why should she have to prove something that’s automatic,” Cheryl said with frustration.

10News reached out to the Tennessee Department of Safety to figure out what went wrong.

A spokesperson told 10News in a statement that Emily may have already been extended citizenship but her Certificate of Foreign Birth from South Carolina is not evidence of U.S. citizenship.

Therefore, the state says they need more documentation to prove Emily’s citizenship even though she is a US citizen, according to the Child Citizenship Act of 2000.

“She shouldn’t have to prove her citizenship when it’s a given,” Cheryl said. “I think it’s an honor that she’s being deprived of. She’s a good girl. She’s done everything she’s supposed to do.”

Cheryl said she will be filling a formal complaint with the Tennessee Department of Safety.

To get a copy of Adoptionland: From Orphans to Activists visithere.