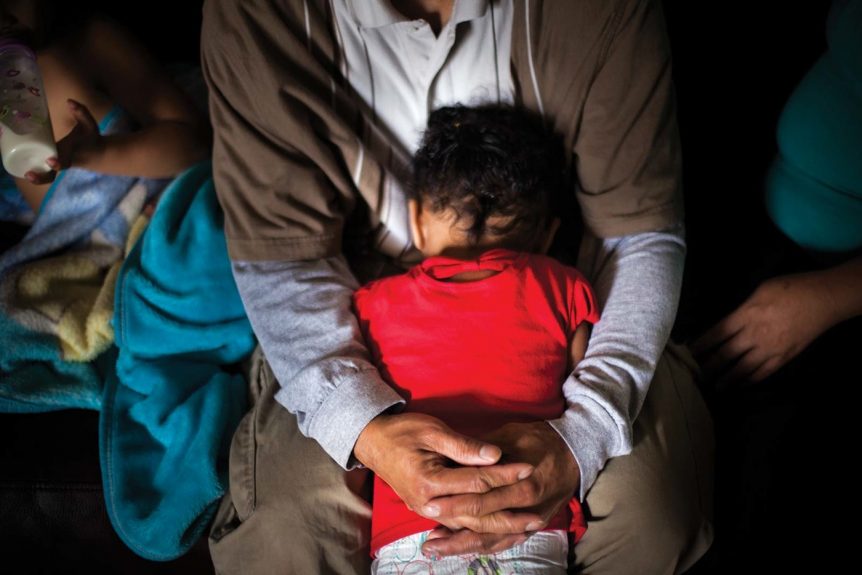 Nurses traded horror stories involving tearful and confused new mothers, who asked whether they were allowed to hold or feed their babies.

On July 29, 2014, Maryann and Dexter Koshiba, 32 and 37 years old, sat, utterly exhausted, in a recovery room at Washington Regional Medical Center in Fayetteville, Arkansas. That morning, Maryann had given birth to a baby girl, and both had been up all night through the labor. Around five in the afternoon, Dexter recalled, he received a phone call. A local adoption attorney named Marti Woodruff was sending someone to the hospital with documents for the couple to sign. The Koshibas had been working with Woodruff for about a month to arrange the adoption of their unborn child, and everything had proceeded relatively smoothly until then. An unfamiliar woman arrived and handed over the relinquishment documents. Dexter was so tired that he couldn’t fully focus on the papers. But he signed them anyway, and roused Maryann to do the same. “Do you know her?” asked Dexter, once the woman had left, but Maryann was so groggy that she didn’t recognize anyone right then. Like that, one of the most important decisions of their lives was made.

Maryann and Dexter had grown up together in the Marshall Islands, on the capital island of Majuro, but Maryann had moved to Hawaii with her family and infant son in 2007, and then on to Ore­gon. Dexter followed in 2008, moving first to Arkansas, and then, after becoming involved with Maryann, to the West Coast, where they lived in Seattle for almost two years before moving, together, to Springdale, in the northwest corner of Arkansas—the unlikely home of a large Marshallese population.
“I don’t even know what that means, ‘closed adoption,’” Maryann said. “What is ‘closed adoption?’”

Dexter got a job at George’s, a local chicken-processing plant, making around minimum wage; they found an apartment and settled in among the Marshallese community. In 2011, Dexter took a job at a Butterball turkey plant, where the wages and benefits were slightly better, but the couple still struggled to pay the $450 monthly rent. Leading up to Thanksgiving, the work was steady, as the plant churned out around 45,000 birds per day. But for the rest of the year, Dexter often failed to get enough hours. Their family was starting to grow—in addition to Maryann’s son, the couple had two new daughters—and some months they could barely pay their bills. Maryann wanted to get a job, but they couldn’t afford a babysitter. They pinned their hopes on a tax refund that might let them buy a ticket to fly Maryann’s sister over from the Islands so she could watch the kids.

In 2013, soon after their then-youngest daughter was born, Maryann got pregnant again. By March 2014, the couple had decided to place their unborn baby for adoption. They already had three children to care for, and both had other children from previous relationships living with extended family. The stories that circulated among the Marshallese in Springdale made U.S. adoption sound not dissimilar to customs back home: The adoptive parents would call and send pictures regularly; the biological parents would have the right to reclaim their children if need be; and the children would return to their birth parents when they turned 18. They’d also heard that Marshallese women who placed their babies for adoption in the United States were paid around $10,000.

With the help of a Marshallese man named Justin Aine—a distant cousin of Dexter’s—who had become a liaison between an adoption lawyer named Vaughn Cordes and the transplanted Marshallese community, Dexter and Maryann were matched with a prospective adoptive family. They chatted with the family over Skype and generally had a good impression of them. Immediately after they agreed to the adoption, they started to receive checks from Cordes—­about $1,200 each month. The funds nearly doubled the family’s income. They were able to pay off old bills and buy clothes for the children and milk for the baby. Dexter bought a car to travel to and from work.

In the last month of her pregnancy, however, Maryann pulled out of the arrangement. She fought with Aine—she said he insulted her father; he said she was pestering him for money. She was still determined to place the baby for adoption, though, and the other Marshallese women in the community advised her to contact another local attorney, Woodruff, to complete the proceedings. “The Marshallese ladies talked about Marti,” said Dexter when I met him and Maryann last November at their tidy apartment in Huntsville, a village of about 2,000 people 27 miles outside Springdale, “and said, she’s a good person, helping people do anything.” Woodruff found a new family to adopt the baby and sent Cordes a check to reimburse him for the money he had given to Maryann during the pregnancy.

But almost as soon as Maryann gave birth, something seemed amiss. First, there was the rush surrounding the signing of the papers dropped off by the mysterious woman—papers that were written in English, which Maryann couldn’t read. (Woodruff doesn’t remember sending anyone from her office to the hospital and said that Maryann and Dexter may have been referring to a hospital social worker; she also insists that the documents would have been translated by the hospital.) When the adoptive parents arrived at the hospital, the two sets of parents crowded around the baby for a group photo. But then the adoptive parents moved to a separate room until the infant was ready to leave the hospital. Woodruff gave Dexter and Maryann some cash—a couple hundred dollars, Dexter said—and instructed them to go home. They asked to speak to the adoptive parents one last time—they wanted to exchange contact information. Woodruff, the couple said, put them off—­disappearing somewhere in the hospital. Maryann was confused; she had thought that the adoptive mother would stay in touch. Now she was being hustled out of the hospital without so much as a phone number. (“If she had been promised phone numbers by somebody, it wasn’t us,” said Woodruff.)

Months passed, and no photos came. Depression took hold of Maryann. “Every day I’m always crying, and my husband [asks] ‘What happened to you?’” Maryann said. “I’m worried because I don’t know where she is right now.” She began to call Woodruff regularly, asking for the adoptive parents’ phone number. She wouldn’t try to take the baby back, she promised, she just wanted to know the child was OK. (Woodruff said that Maryann only called to argue that she hadn’t signed a consent form, but that if she had asked for the adoptive parents’ phone number, she would have told Maryann that information is confidential.) Dexter said they offered to repay the money they’d received from Woodruff, but Woodruff told them that wasn’t a possibility. Woodruff stated that she makes sure all the birth parents she works with understand the terms of their agreement: “I have never promised open adoption to anybody because, to me, that would be a misstatement of Arkansas law.” At one point, Maryann tried to go back to Aine, hoping to reconnect with the first set of adoptive parents—the ones who had promised to stay in touch. But, of course, it was too late.

In desperation, Maryann called the police. She says the police called Woodruff, then told Maryann that she wasn’t entitled to any information since she had willingly entered into a closed adoption. Closed adoption is the default form of adoption in Arkansas, and it mandates that adoption records are sealed; no identifying information about either birth or adoptive parents is shared and the parties can only contact each other through their agency or attorney. If she persisted in calling the precinct or Woodruff’s office, Maryann claimed the police told her, she’d be thrown in jail. Together, the couple approached a lawyer to see if they could sue for the return of the baby. But after a quick call to Woodruff’s office, the lawyer told the Koshibas the same thing the police had: They’d agreed to a closed adoption, and that was that. “I don’t even know what that means, ‘closed adoption,’” Maryann told me. “What is ‘closed adoption?’” Dexter repeated. “We’re just trying to find someone to help us.”

Adoption: What You Should Know (An Orphan’s Research)