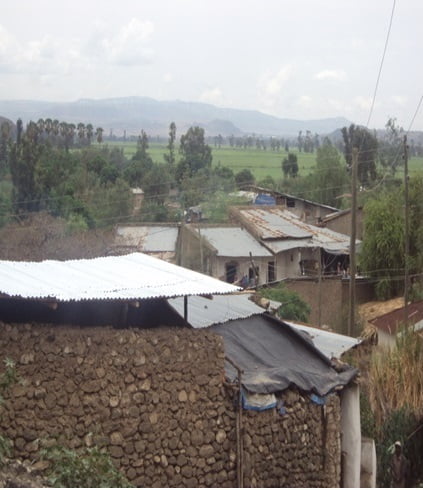 The 36-year-old, Tingert, was born in Wonji Shoa. She is a healthy-looking young woman and is an Orthodox Christian. Her mother and father came to Wonji Shoa to look for a job. They got employed for a blue-collar work in Wonji sugar factory and stayed in Wonji Shoa. She was raised in a big family that consisted of her seven siblings. All her brothers and sisters except one sister live in other towns of the country, in Jima, Hawassa and Addis Ababa. Her sister who is in Wonji Shoa works as a health assistant at a hospital located in the area.

Tingert gave birth to her first child after being raped by a man when she was living in Addis Ababa, where she went to school while living with a relative. One day a man gave her a ride to school.  She thought he was taking her to school but he all of a sudden changed direction and took her to a residence, telling her that they had to greet some family members who came from Wonji town. She believed him and was happy that she was going to meet with people from her hometown. He raped her at that time in which she tried to escape it but failed. As a 15 year old girl, she didn’t know what pregnancy is and as such didn’t give attention to the early signs of pregnancy. She started gaining weight. When the family she lived with, took her to the hospital for a general check-up, it was revealed that she was pregnant. It was shocking for her.  She dropped out of school because of teenage pregnancy and was taken to Adama town by her elder sister who hid her in a rented house and took care of her until she gave birth.  No one knew, except their mother. The reason why this was kept confidential was that they were afraid that the people would discriminate against Tingert for having a baby without a proper marriage. Tingert believed that they will blame her for what has happened. After that she went back to school leaving her child with her sister. Her sister is the one who raised her first born. Tingert’s daughter is now 17 years old and lives with her aunty. Life continued and Tingert got married and moved to Wonji Shoa.

Tingert was educated up to grade 12 and is currently a housewife. Her husband is a government employee and has an advanced diploma.  She gave birth to two more children; a girl and a boy. Although she had a plan of continuing her education to a higher level, she didn’t score the required results to pursue her education at a government school. Furthermore, she didn’t afford to join a private college.

According to her, she took good care of her children. As a dedicated Orthodox Christian, every Sunday, she takes them to church for prayer and Holy Communion. She heard about international adoption from her elder sister who works as a health assistant at a hospital.  Whenever she came to visit Tingert her sister mentioned to her about international adoptions and how Tingert could benefit herself and her children if she gives them for international adoption.  Her sister consistently insisted that she should give them for adoption, and by so doing, she was trying her best to make Tingert accept her advice. In addition, she even sent friends and family members to Tingert so that they could convince Tingert to accept her sister’s advice to give away the children. Her elder sister, whom she respects very much, was insisting day and night. Initially, Tingert refused her proposal, and when she continued her trials, Tingert told her that she would think about it and tell her the outcome.  However, her elder sister consistently insisted that Tingert should take and use this chance which she thought would be a great opportunity for the children’s future. She even reminded Tingert of her childhood to let Tingert understand the consequences of saying no to such a chance that was availed to her and her husband. When Tingert’s sister was a small child, her father was working in the sugar factory which was then run by people from Holland. Her sister remembers these people from Holland asking their father to give them Tingert’s elder sister who now works at the hospital. However, their father refused to give her and she was always not happy with her father’s decision. She was reminded of this incident by the elderly people in the neighborhood who made her regret as to why her father hadn’t given her for adoption. Through the years, she has seen some of her peers who were adopted by the Dutch people and brought up in foreign countries. When her sister saw these childhood friends during their visit to the neighborhood and observed the many differences between them and her, she would feel pity for herself according to Tingert.  As a consequence, she has always lived with this unfavorable memory and regret, which she always reflects.  She always tells Tingert ‘if only my father had given me for adoption, my life would have been different.  I would have supported my family. My dear sister, your children will raise the same question when they grow old.  They will blame you for spoiling their future. They will have the same attitude I have about my father, and continue to blame you throughout their life.’

Under the circumstances, Tingert started considering international adoption seriously. One Sunday morning, she went to the church with her children and prayed to God saying:  ‘God if it is your will let me make the right decision.  It is my sister who brought this news and you know how much I love and trust her.  I know she wouldn’t do something that will jeopardize the future of my children.’

Tingert hasn’t totally made up her mind, but the idea of not missing this opportunity for the sake of children remained to be a case requiring the final decision. Tingert believes her sister’s childhood experience has great influence in her final decision on the case. Mean time, life at home became a bit difficult. Although Tingert loves her husband, they sometimes quarreled with worthless matters. Consequently, she left the house with her children and stayed with her parents for a short while. That time her sister came with the proposal again and convinced Tingert to make her decision to give the children. It seems that the situation she was in had contributed to this final decision. Tingert delivered her children (ages 6 and 5 years) to the hospital herself.  Her husband already accepted the idea of the children’s adoption, even though she was not talking to him as a result of their misunderstanding, she knew he wouldn’t disagree with her decision.

As mentioned earlier, Tingert was not in a position to pursue her studies at the college level due to the circumstances she was in. Hence she did not want her children to have the same history as herself; she wanted her children to have a better education than herself. She was also not happy with the situation of women residing in their town and wondered if this would ever change for the better. Women in the area didn’t have freedom in their life according to her and she was worried about the fate of her own children especially her daughter.  She didn’t want her daughter and son to lead the same life like the people in her area when they grow up. She thus finally, fully decided to hand over her beloved children for adoption.

When Tingert gave her children, the only thing that was required of her was to inform the hospital what her children liked in regards to food. Her sister was the one who provided all the information since she has more knowledge in the issue than Tingert.

Tingert got information that her children were adopted internationally by her sister.  In the beginning, the adopting parents of the two children use to send pictures. However, it has been two years since Tingert received any picture from them. Her sister who works in the hospital is aware of the disappearance of the information on the children but she has no way of knowing the reason behind.

Although Tingert gave her children for adoption for reasons she mentioned above, the people living in their surroundings hated her for her action. The reason is that Tingert and her husband were ostracized for involving in international adoption because Tingert and her husband were considered healthy and well to do when compared to the living conditions of most people in their town. Tingert’s daughter, born in 2000 is 12 years and her son, born in 2003 is now ten. She doesn’t regret at all that she gave her children for adoption so long as they live a happy life now and in future.  Her only concern is that, at later years, she wanted to give birth to other children, which she wasn’t able to make. The reason as to why she couldn’t conceive is unknown.  She is wondering if she would be able to conceive again and have another child whom she will be happy to bring up or remain to be without one. She says “I leave my future in God’s hands.”

That being the general situation, she believes that her children, whom she gave for adoption, are happy where they are and that they are getting the education that she dreamt for them in a secure environment.  She can prove it from the pictures she saw of her children that was last sent to her years back. She knows her children are in good hands. However, she does worry as to why their adoptive parents haven’t brought them to Ethiopia for a visit,  because her sister had informed Tingert then that they have promised to bring them when they reach the age of 12 and now her elder has reached this age. Tingert still hopes that their adoptive parents will bring them and enable the children to meet with their family in Ethiopia. According to her they may come this summer or they may be waiting for the younger one to reach 12 too. Tingert can’t ask them through mail because she doesn’t have any addresses on the picture. When the hospital at the district gives Tingert any pictures and letters, the address on the envelope is removed. Although she knows that her children are in Holland, she does not know their exact location/address. She tried to call the caseworker at the orphanage with the number that she got from her sister. The lady whom she found on the other side of the phone told Tingert that she no longer works at the orphanage due to challenges encountered by the parents who relinquished their children. She told Tingert that she facilitated the process of international adoption out of good will; she has left her job as it is no more considered right.  Tingert has seen on TV that there are other childcare alternatives recently but didn’t have the information when relinquishing her kids.  However, she still believes that international adoption is the best when it comes to the better life for children.

Tingert believes that, when her children grow up they will come and visit their parents, and that they will become productive citizens. She is also sure that the adoptive parents will show them their country of origin. Tingert heard from other people that, foreigners tell the truth and they will not break their promises. This gives light to her hope of seeing her children one day, a hope that keeps her stand firm in life.