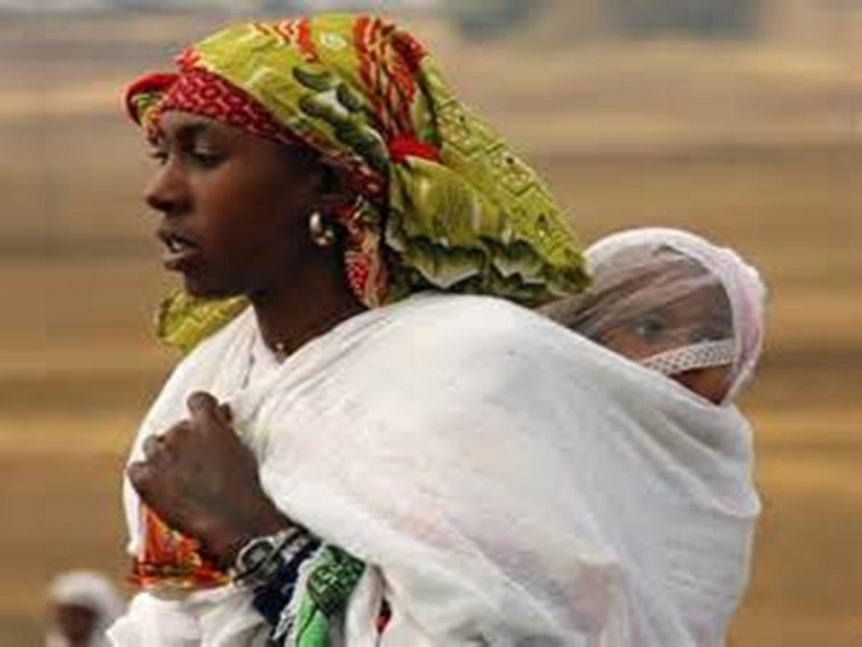 Her name is Messert, an Orthodox believer. She is 35 years old and was born in Wonji Shoa located 110 km from Addis Ababa. Her parents used to work in the sugar factory that is located in the area. She has two brothers: one brother lives in Adama 10 km from Wonji Shoa and the other one works at the sugar factory here in Wonji Shoa where their parents used to work. She was educated up to grade four and dropped out of school. At the age of 17, she was given to a young man on arranged marriage by her parents. Her husband was a daily laborer and she was a housewife. She gave birth to three children and their life used to be good till her husband became sick and was admitted in the hospital.  That was when they found out that they both were HIV positive. Her husband died a few months after he started the medication for HIV. Messert was then three-months pregnant and is HIV positive, on top of being an ailing with asthma and high blood pressure.

In her struggle for living, Messert started washing clothes and baking injera (local bread) at an individual’s house and earns 30 birr a month. She continued in this in order to survive until her pregnancy allowed her to do so. She then started depending on an aid from an Evangelical church named Full Gospel that provided her with wheat and fafa (a powder used to make porridge) after she gave birth in order to feed her family. Some neighbors also came and cared for her when she was seriously sick. Whenever she felt strong enough, she went back to her daily duty which was baking injera and washing cloth. The baby was cared by her six-year old daughter at the time. The two older children went to a government school which required no payment. Sometimes when Messert got sick and stayed at home, her 13 year-old daughter replaced Messert in baking the injera so that the family could have something to put on the table to eat.

That was when some people from the hospital started coming to Messert’s house. They initially came once in fifteen days and then twice a week and tried to convince her to give her one-year old son and her seven-year daughter for international adoption. Some neighbors strongly advised Messert to never miss this opportunity which they themselves have done. They said Messert was to take this option for the well being of the children. She then made her final decision in fifteen days from the time the people from the hospital first came to convince her. However, her thirteen-year daughter said to Messert:

‘please don’t do it; I am growing and it will not take me long to be able to help the family; I am there for you and I will support you.  However, if you insist (to) give my one-year old brother then I will not allow you to give my sister no matter what, because I have another brother but I need my only sister.’ The seven-year old one also cried and refused to go.

During that week, Messert told the children she will go to the hospital for a checkup taking the one year old boy with her. Her intention for not telling them where she was going was for them not to press on her to change her mind. The little one cried bitterly when Messert took him from his sister’s hand as she was attached to him very much. Messert reached the hospital but was not sure of what she was doing.  She was torn between the two – she wanted to go back but then was thinking if she goes back, the better life that she wished for her son would forgo.  She deeply reconsidered the issue for a while and persuaded herself to be strong and reached at the office of the health assistant.  She was asked to sign a paper the contents of which she didn’t know.  The only thing that was asked by the health assistant was the age of her son. Messert told the health assistant that her son was one year and two months old. The health assistant warned her that, if anyone asks Messert the age of her child she should tell them that he was seven months old. The health assistant at the hospital told her that her son is HIV positive. As this was very sad news, Messert burst into a bitter cry, and left the hospital empty handed. Messert finds it very difficult to express in words the emotional feelings she was in when she left the hospital leaving her son behind.  She didn’t have any other option. The only family that she knew was her parents who had already died and her two brothers were not in a position to take care of themselves, leave alone her children. Her other relatives live in Addis Ababa and Gojam which she never met because she lived her entire life in this village where her parents migrated looking for employment.

Messert decided to give her son because she wanted him to have a better life. She was told by the people that came from the hospital that if she gives him for adoption, maybe he will support her financially as he will definitely have a better life. Even if Messert dies he will come and help his siblings. This was Messert’s understanding of the situation then. She still believes that the life here and there is different. Therefore, if he is successful she believes her son will come back to rescue the family from poverty. Messert knows that her son was one year and two months old when he left.  Nevertheless, she was sure there will come a day when he will ask for his mother. The fact that he has a different color from the people around him will trigger an interest of knowing more about himself, including his biological parents and country of origin according to her.

‘Go away.  I don’t want to see you again, you gave your child voluntarily and do you think anyone cares? Don’t come near me’.

With tears in her eyes in a vibrating sad tone Messert said,

“I didn’t think I will be detached with my son. I wish I had never given my son if I knew that I would end up in not being able to seeing him or hearing from him for the rest of my life”.

Messert really doesn’t know how her son is coping with the disease. According to her she continues to pray for his well being wherever he is. She is very, very eager to know about him, at least hear about his status, if not see him physically.  She says, if she knows he is dead, she would accept the reality and continue life. If he is alive it is like a dream come true for her. Messert’s children ask for their younger brother day by day and always blame her for the decision of giving him. Being very restless Messert went to Adama town which is 15 km from Wonji Shoa based on the information she got from the neighbors. According to them, an organization in Adama facilitated the process of the adoption of her son. She met with the director of an organization for people living with HIV/AIDS who, after taking the profile of her son, made several calls to orphanages in Addis Ababa. However, he didn’t find any information that lead to the location of her son. At the end he told Messert to go back home and not to worry promising that he would try to find out information on the status of her son and let her know.  Messert had never heard from him nor went back for follow up as she has no money that she can pay for transportation.  She doesn’t have any answer for the question her children raise repeatedly.

According to Messert is now living in a limb, she doesn’t know whether to say she has a son or her son is dead.  If she doesn’t know about the status of her son, her life will continue like this till the day she dies. Her then 13 years old is now 21 and is working in a flower farm located in Ziway. She gets three hundred birr per month out of which she sends her some.  She kept her promise and supports her mother sharing from her meager income, for which Messert is grateful. She sometimes becomes very sick for weeks, Messert is scared of dying of her illness before she sees or at least hears about her son. She now regrets giving her son for adoption. She always prays to hear something about her son. In the middle of all these, she thanks God that her children are now able to support each other. Her son and daughter go to a government school. Her son works as a shepherd and gets 30 birr per month. With the money he gets he buys educational material and clothes for himself and his sister. Life is bitter for Messert but she has no choice than to pray and wait for an answer to her daily prayer to at least hear about her son.