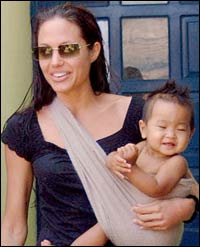 An American agent who arranged a controversial Cambodian adoption for actress Angelina Jolie is reportedly planning to surrender to US authorities to face charges of visa fraud and money laundering.

Lauryn Galindo, a former Hawaiian hula dancer, has been indicted by a US federal court over allegations that she arranged adoptions of children who were not orphans, and paid poor Cambodian women to give up their babies for American couples.

The case has renewed doubts about the legitimacy of the adoption two years ago of Tomb Raider star Jolie’s son Maddox from an orphanage in the provincial Cambodian town of Battambang.

Soon after the boy was delivered by Galindo to a movie set in Africa, where Jolie was filming, Cambodian child welfare workers told The Age they believed Maddox had been sold by his poverty-stricken mother for $US100 ($A130).

“I’m sure that this child was not a real orphan and was not abandoned,” said Dr Kek Galibru, head of the respected human rights agency Licadho. The group’s report on corruption in the adoption industry triggered a US moratorium on Cambodian adoptions and a tightening of procedures by several Western embassies.

The Honolulu Advertiser reported that Galindo, 52, would surrender this week to authorities in Seattle to face charges involving some of the hundreds of other Cambodian adoptions she has arranged for American couples.

The paper said Galindo’s sister, Lynn Devin, who runs Seattle International Adoptions, is due to be sentenced by a federal court in Seattle in March, after pleading guilty last month to falsifying documents to obtain visas for Cambodian children purported to be orphans.

Galindo was named as a co-conspirator in the November indictment.

A California media consultant engaged by Galindo said she was innocent and was co-operating with Federal Bureau of Investigation officers. The FBI’s Operation Broken Hearts is tracking widespread corruption in Cambodian adoption circles.

British newspapers reported last month that Jolie had hired a team of lawyers to fight any attempt by US authorities to return Maddox to Cambodia.

They quoted the actress as saying she had gone to “great lengths” to ensure the boy did not have a living birth-mother in Cambodia when she and her former husband, actor Billy Bob Thornton, adopted him two years ago.

“I would never rob a mother of her child. I can only imagine how dreadful that would feel,” said Jolie, who is a “goodwill ambassador” for the United Nations refugee agency.

“Maddox is my baby, he is by my side all the time, and I think I can give him so much. I can no more imagine living without him than not breathing,” she said.

The US indictment charges Galindo and Devin with falsifying documents “to expedite the adoption process” and “enhance their profits” between 1997 and 1999.

In one case, according to the document, Galindo in January 1998 faxed her sister the medical records of a child to be adopted with a handwritten note: “Father dead – mother very poor.”

Four months later, she allegedly told the adoptive parents to give the birth mother $US100 and to donate $US3500 to the orphanage that had been holding the child. In an interview with Cambodia Daily in early 2002, Galindo, who kept a luxury apartment in Phnom Penh, a chauffeur-driven Mercedes and several bodyguards, said: “When people ask me what I do, I don’t say adoptions, I say humanitarian work. I didn’t come here to steal children. I came here to do what I could to help.”

She conceded that more than half of the average $US9000 fee she charged American couples for adoption processing was given to Cambodian officials.