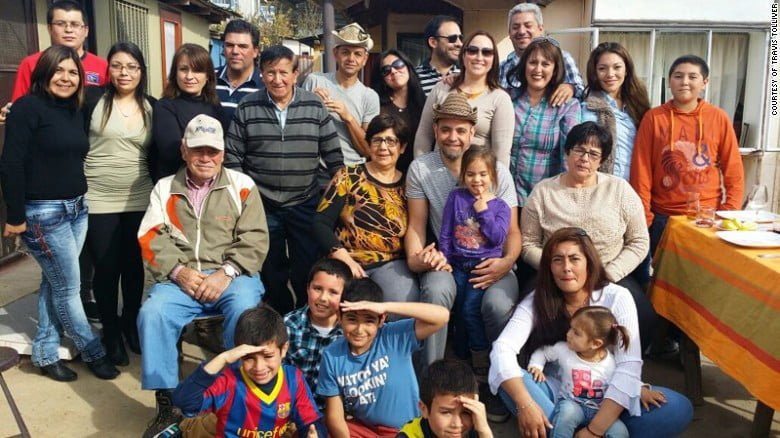 Santiago, Chile (CNN) It was a hug kept on hold for more than 41 years. The hug of a mother and son whose lives were abruptly separated four decades ago.

Nelly Reyes had been waiting for hours in the international arrivals lounge at Arturo Merino Benitez International Airport in Santiago, holding a hand-made red poster board sign that said “Lovingly waiting for Travis, your mother Nelly and family.” A granddaughter in her early 20s and a 10-year-old grandson keep her company.

On the other side of the terminal, going through immigration and customs, Travis Tolliver was anxious and nervous. Up until the last minute, mainly because of a language barrier, he didn’t know if anybody would show up to greet him.

When he finally came out of the terminal, no words were needed. They rushed to each other’s arms and held on for a long hug. Few relatives knew the real story.

Tolliver had tears of joy. “I don’t know how I feel. It’s crazy! I never thought this could happen,” he said.

The emotions released in that hug at the airport were the culmination of four decades of heartbreak, lies, deception, criminal acts and an injustice that separated mother and son at birth.

The newborn baby ended up living thousands of miles away, being raised in Tacoma, Washington, by a couple who had no knowledge of what had happened, while his biological mother cried and desperately tried to find her son.

Tolliver says he always knew he was adopted. What the 41-year-old supervisor at an imports distribution center didn’t know was that he was stolen as a baby in his native Chile, only hours after his birth.

He hopes that knowing the truth about his past will now allow him to overcome a psychological trauma he has suffered for as long as he can remember. He says he has “abandonment issues.”

“You know, I wasn’t given up willingly like I thought for all these years, so that makes my heart feel wonderful; but it’s just coming to terms with that. This whole thing still seems unreal to me,” Tolliver said.

Reyes says she had a normal pregnancy with no medical issues. The mother of six children, including Tolliver, says she gave birth to a healthy baby boy at 4 p.m. on November 15, 1973. She was 19.

But her joy quickly turned to sadness when a nurse told the baby was born with a heart condition and was unlikely to survive.

“Hours later they told me he had died,” Reyes said. Despite her multiple pleas, Reyes says she was never shown a body and was never given a death certificate.

Tolliver’s case is not unique in Chile, according to Marcela Labraña, the director of the country’s child protection agency (SENAME, by its Spanish acronym).

“This is no longer a myth. We know nowadays that this happened and it was real. It’s not a tale that a couple of people were telling,” Labraña said.

Her agency is currently investigating hundreds of cases, but Labraña says there could be thousands of cases of illegal adoptions from the 1970s and 1980s, when the country was ruled by a repressive dictatorship.

Tolliver and Reyes believe he was stolen. He is now working with authorities to find out what exactly happened to him.

In Chile they call them “Children of Silence.” Some babies were stolen and sold. Other newborns were given away by their grandparents who conspired with doctors, priests and nuns to hide a daughter’s socially embarrassing pregnancy.

Prosecutor Mario Carroza investigated Gerardo Joannon, a priest accused of acting as a secret liaison between well-to-do families in Chile and adoptive parents as a part of a scheme also involving doctors, nurses and nuns in the 1970s.

Carroza says the priest, who belongs to the Sacred Hearts congregation, was investigated for the crimes of theft of minors, falsification of documents, and usurpation of identity.

To the dismay of those seeking answers, Carroza determined that even though Joannon might have committed those crimes, it was so long ago that he couldn’t be prosecuted.

“In this case we’re talking about a period between 15 and 20 years ago, which means the statute of limitations has run out,” Carroza said.

The congregation to which Father Joannon belongs also conducted an internal investigation last year into the allegations and sent its findings to the Vatican. The Holy See later determined that even though the priest had made ethical and moral mistakes, none of his actions had risen to the level of a violation of canon law.

In his only on-camera interview in April 2014 with Chile’s Channel 13, Joannon denied all the accusations, including telling women their children had died in order to give the babies to other couples.

“I never told anybody the babies had died because I didn’t even know if they had been born, or if they were male or female,” he said on Channel 13. “I never knew anything.”

In Tolliver’s case, it’s not clear who took him from his mother or whether there was any money involved.

Tolliver says his U.S. adoptive parents never knew he had been stolen. They were told he was an abandoned baby.

Tolliver also says he tried to find his biological parents when he was in his 20s but didn’t have the connections to make it happen.

It was not until last year, he says, that he determined he needed to find the truth about his past not only for himself, but also for his two children. He says the decision was, in part, motivated by seeing several news stories about stolen children in Chile, including CNN’s “Children of Silence.”

The news that he was matched to his biological mother through DNA testing has been difficult to digest, Tolliver says, especially for his adoptive mother.

“But she’s always going to be my mom — it’s just that I have two now — she raised me. I am who I am because of what she did for me. She’s always going to have a place in my heart and it’s not like I’m replacing her or anything like that,” Tolliver said.

Since reuniting with his biological mother, Tolliver has been busy meeting four brothers and one sister and seeing the sights of the country.

“Now I’m back here in my homeland I guess. I’m going to explore and see what the country is all about,” he said.

One of his stops was the site where the hospital where he was born once stood. The Enrique Deformes Hospital in the coastal city of Valparaíso has since been demolished and Chile’s main congressional building now sits in its place.

As to why he would travel such great distance from his home in Yelm, Washington, and spend so much money — some of it raised through a GoFundMe appeal — to find the truth about his past, Tolliver is unequivocal. “To become whole,” he says choking up and fighting back tears. “I’ve always felt incomplete, always kind of the outsider. My adoptive parents have blonde hair blue eyes. I just kind of stood out like a sore thumb.”

Reyes, his biological mother, has been cooking for him daily and going out of her way to make him feel welcome. He doesn’t speak Spanish and she doesn’t speak English.

But more than anything, she’s been showing him her love, giving her son the hugs and kisses that she was unable to give him all of the years gone by.