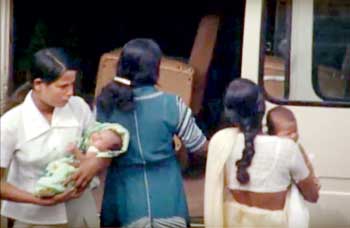 For tourists the pediatric ward resembled a supermarket

A recent documentary by Zembla, a Dutch current affairs programme, brought to light an adoption fraud during the latter part of the 19th century. Previously in 1983, a documentary was made based on the adoption scandal by Flash, a Dutch adoption organization that made massive profits by ‘selling’ children. News reports from 1987 highlight that a ‘baby farm’ had been raided and the police found 20 newborns and 22 women. The report further revealed that the babies had been purchased for about $30 and was sold abroad for about 30 times that value. However neither the Sri Lankan Government nor the receiving Governments have taken  any worthwhile steps to address  the issue, until recently when Health Minister, Dr. Rajitha Senaratne  admitted to the revelations of the documentary makers that  there had been baby farms and that he will investigate into the issue and take the initiative to set up a DNA bank.

It is claimed that around 11 000 babies had been sold during this period. Children had been stolen from the arms of their biological mothers. One woman, who requested anonymity, said that her child was stolen at the Ratnapura Hospital. “This was during the JVP insurrection. The hospital didn’t give me my child. There was no one to inquire from because the doctors were on strike. The baby was stolen,” she said.

In certain instances, fake mothers have handed over the child and now the adopted children have the information of this mother who is acting as their biological mother. In certain other instances, the birth mothers had been deceived or coerced into giving the babies for adoption. There is also concern that women have been raped for the adoption market. Further, sources told Dailymirror that during the time referred to in the documentary the practice of tourists walking into the hospital and picking babies for adoption had existed.

Most mothers have given their children for adoption due to lack of support in raising the children on their own. Gallaguruge Sirimawathie said that she had to give her child for adoption because she was helpless. “My husband and his family were abusive. I had nowhere to go and I had to give the child up for adoption,” said a weeping Sirimawathie. “I don’t want anything from the child. I only want to see the child before I die,” she grieved.

Further, though agents from adoption agencies, help children locate their mothers and vice versa, mothers and adopted children told us that they weren’t trustworthy and were money-minded. Sirimawathie has traced her child through the birth certificate and knows that the child lives in Sweden. However, the agent who had located the whereabouts of the child had refused to provide her with further information claiming that the child didn’t want to meet the mother. Sirimawathie is suspicious of the agent’s trustworthiness.

Another woman, W.P. Leelawathie from Homagamasaid that when she gave up her son for adoption the agent promised her that the son would return to her one day. But she has received no news of him to date.

Renuka Abeysinghe from Matugama, who had given her daughter for adoption voluntarily, said that she only wanted to see the child, but added that she has no information about her whereabouts. “I was given a letter thanking me and the letter also said that I will receive photographs. But I have received nothing. The child must be big now. I only want to see her,” she pleaded.

The documents that were prepared, such as the birth certificate, contain erroneous details which are misleading. A 40-year-old adoptee, who is currently living in Belgium and didn’t wish to be named, said that his family name, mother’s name and the birth date were false in the adoption papers and in the hospital register. However he has succeeded in locating his biological mother from Wellawatte.

When asked about the difficulties he had to endure as a result of the irregularities in his adoption he said that when he wanted to marry he didn’t have a birth certificate, but only adoption papers. He added that these papers were inadequate when dealing with the local Government. “Basically, I had to prove that I existed. After living here, attending school, playing sports, and becoming a world champion, I wasn’t allowed to marry because I didn’t have the necessary documents,” he said.

Shirani van den Berg, living in the Netherlands, said that her adoptive mother was unstable, alcoholic and often made her feel unwanted. “A mother has the right to know where the child is living and the child has the right to know its biological mother and its medical history,” she asserted.   In the light of the recent revelations the Dailymirror spoke to some concerned parties.

“Women were raped for the adoption market”

The filmmaker of the Dutch documentary made by Zembla, Sanne Van Rossen is Sri Lankan born and was adopted by Dutch parents.

Filmmaker of the Dutch Documentary

“There were a lot of false things in the papers regarding the adopted children. For instance, when they did the DNA Test the mother they traced through their papers weren’t really the biological mothers. Sometimes the birthplace would be wrong. That is why I did the research,” the 32-year-old told Dailymirror in a Skype interview
Women had been picked up from the street and had been raped to produce children for the adoption market. Some women had been paid while some weren’t. “The story that revolved around these adoptions suggests that adoption was illegal. You can consider it to be legal because of the papers which had been documented by lawyers or very powerful people. These were court adoptions. But these adoptions are illegal because women were raped for the adoption market. They had to give their babies away either because they were forced or they were made to believe the children would return later with money,” she said.

“I have documented an incident involving the Flash adoption organization where the mother refuses to give the baby away. Instead they gave her money and asked her to shut up,” she said referring to the documentary she had made. In another incident involving a twin brother and sister, one baby had died, but the corpse was replaced by another so that they appeared to be twins,” she said.

I have documented an incident involving the Flash adoption organization where the mother refuses to give the baby away. Instead they gave her money and asked her to shut up

“Flash, was an adoption agency back in the 80s and the 90s. They were selling babies. Flash would arrange a baby in 3 or 4 months. There were around 4 or 5 such adoption organizations with the history. They did the same thing,” she said. According to her the cost of an adoption was as much as €15 000 at that time. Flash no longer exists.

“Everyone is saying that he or she didn’t know or that it is not his or her fault,” she said.
Now that these adopted children are in search of their mothers the people who were previously involved in the adoption market have offered root searching which again seems to have become a lucrative business. “We do root searching through people from Sri Lanka who were involved with Flash back in the 80s. We need to pay a lot of money and it’s not trustworthy. It’s better to go by yourself and search for yourself. Sometimes these contact persons say I have found your mother, but they don’t provide the address,” she said.

She started her own search for her biological mother in 2010. Her birth certificate states that she had been born at the Rathnapura Hospital. Accordingly she traced her birth mother and a DNA Test proved the biological connection. However her mother had given birth to her at the Karawanella Hospital.

“Children were turned into commodities”

Executive Director of ‘Against Child Trafficking’(ACT), Arun Dhole, said that though this scandal was reported in the media in the 1980s neither the Government in Sri Lanka nor the Governments in the receiving countries had addressed it. ACT is a child rights NGO established in 2008 at the suggestion of the European Commission.

According to Dhole, children were ‘manufactured’ not just in Sri Lanka, but also in South and Middle America, India, Nepal, Thailand, Romania etc.

“There’s a demand for children, so supply is created. In a market- even when regulated- its forces are stronger than the interest of the children and their families,” he explained.

“The problem regarding these adoptions is that some children appear to be bought, the paperwork is fabricated and there is no information about consent being given etc.Essentially children were turned into commodities,” he added.   He suggested that the Government of Sri Lanka should open a full-fledged investigation into the adoption practices from the past. “The biological families as well as the adult adoptees need assistance in tracing each other and there should be compensation. For today’s children, Sri Lanka should just stop Inter-country Adoption and strengthen the implementation of the United Nations Convention on the Rights of the Child,” he said.

Article 21(b) of the United Nations Convention on the Rights of the Child states that ‘inter-country adoption may be considered as an alternative means of child’s care, if the child can’t be placed in a foster or an adoptive family or cannot in any suitable manner be cared for in the child’s country of origin. “Nobody can tell me, that Sri Lanka or India can’t take care of its children,” he said.

The problem regarding these adoptions is that some children appear to be bought, the paperwork is fabricated and there is no information about consent being given etc