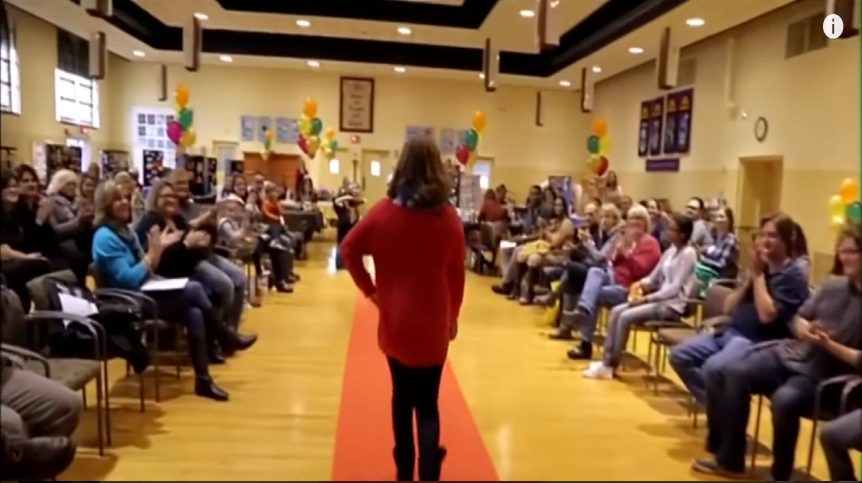 The original trailer was taken off of the air.  But below is the transcription of the original documentary:

Each year an association organizes a fashion show of children: children parade to find parents. Some of the children are sometimes in their third or fourth family. They must convince potential adopters in a few minutes to take them. Interested families will get a flyer about the child they want and they have about two hours to talk to the educators and the child and interact with him/her Cindy is 40 years old. She is looking for a little boy in the catalog of the association. The boy she’s offered is much older than she wants. She is looking for one between 0 and 6 years old, but many of those who are there are older than she wants. She says it’s like a trade show whose products are kids to adopt, and for a future mom like her who wants to adopt it’s pretty upsetting to see. This children’s fair is the horrible consequence of re-homing. In the United States, you can adopt a child and then publish an ad to get rid of him/her. On the internet, there are thousands of photos … A quarter of adopted children are abandoned by their new parents: 25,000 each year, they are called disposable children.

They are Frank, Nita, Poppy. They were sold and traded as merchandise.

A few hours before the parade, children prepare for the parade] [Interview with Frank] Frank, 14 years old, lives in foster care. It’s been two years since he’s looking for new parents. He knows that today someone has moved for him. He was adopted at 8 years old. His adoptive family got rid of him after 4 years. There was domestic violence in the family, but he wanted to stay. He had been adopted by his biological sister. He was separated from her when he was placed in foster care while waiting to find a new family. His sister was taken to another home. He hopes the third dad who is waiting for him today could be the right one.

The potential father, Tom, is a teacher and has no children. For the association’ he’s an ideal candidate, but Tom has another vision of what is played here. At the end of the parade, Frank has 2 hours to convince Tom to adopt him. A re-adoption is 2 times less expensive than a conventional adoption. The future dad is entitled to a trial period. Tom will take Frank a few months at home to introduce him to the whole family before being sure to re-adopt him.

Fifteen days after this shooting, Frank moved to the new family, but six months later, the re-adoption didn’t go well. Incompatibility issues. Frank is back in the foster home.

This lack of legislation today allows all abuses. These ads abound on the internet, they are placed by agencies. In the United States, it’s called the secondhand child market. On average, three of them are offered each day. It’s shocking but ok. None of these agencies wanted to receive us. To understand how it works, we responded to an announcement for an 11-year-old child.
The agency is not very concerned. It does not verify our identity or our motives, but we receive photos and a prize. $3,700 in total. In principle, this system does not allow direct contact with families who offer their children, but we have circumvented the rule and contacted the parents.
[phone conversation. The mother explains the procedure to follow]� These agencies are recognized by the state and as long as a judge does not approve re-adoption, the parents can not abandon their child. A procedure that requires time and money, so some are turning to a parallel adoption network.

[Nashville, Tennessee. Interview with Nia] Nita is 19 years old. She does not particularly like Nashville, she moved here to flee her adoptive parents. She has lived in this apartment for a year … Her adoptive parents had given her to strangers five times. Each of the experiments was terrible. Nita was adopted from an orphanage in Haiti at 13-year old by the Smiths. Arrived in the United States, she is disturbed, agitated, suffering traumas related to her childhood, so seven months after her adoption, her new mother gets rid of her in a few lines only on the internet.
The Smiths transfer custody of Nita by a simple manuscript. It’s free and immediate. A stranger, the new “father” takes Nita to school. Nita stays for one month with the new family. After a vote by the family members, they decide to return her to the Smiths In the eyes of the law, the Smiths are the parents of the girl. She is entrusted to other strangers four times. On the fifth attempt, Nita is sent to new strangers, Jean-Paul and Emily Kruse. The couple already has 8 children including four daughters adopted on the Internet. But this family has a terrible secret. Jean-Paul sexually assaults his four little girls. Nita is spared but she discovers the horrible reality. Nita doesn’t say anything for a year and a half, then one day she tells Emily what the little girls told her. Emily threatens to send her back if she tells anyone. Nita is so scared of being sent back to a new place and she has been in so many places that she didn’t like or that were not made for her that she doesn’t say a word.

She talked about it in 2015 and Jean-Paul was sentenced to life imprisonment for rape and Emily to 18 months in prison for intimidating a witness. Nita, 18, will not return to the Smiths, but in her child’s heart, she considers them her parents and says she forgave them.

21- 26 min. [Interview with the Smiths. The mother refused. Father accepted. ] They divorced last year. When they adopted Nita, they had four biological children. Motivated by helping the poor, they adopted five children in Haiti. After seven months, the family imploded. They had problems with all the children but they decided to get rid of only one child, Nita. They didn’t go through an agency, they entrusted Nita to the first comers, complete strangers. Since their divorce, the Smiths share custody of their 8 children. Nita decided to definitively cut the bridge.

26 -31 min. Social services don’t do the follow-up of adopted children in the U.S. There is only one support center for adoptive parents in Washington, Center for Adoption Support and Education (CASA). It’s non-profit and depends on private funds. Kase helps more than 500 families a year.

[Interview with Debbie Riley, Director of the CASA Foundation.] [A family in the center the day of shooting]. The Orson’s wish to become the parents of two 5-year-old girls who come to therapy. They were first adopted by a Texas family, but after two years there was no bonding between the mother and the two girls. She decided to give them to the Orsons, but the latter wants to avoid the twins a new trauma. After nine months of therapy, a judge will dissolve the first adoption and appoint the Orsons as new parents.

31 -37min. [Interview with Megan] Megan was the most difficult to convince for the interview. She was worried about the image that had been given to her. She embodies the paradox of re-adoption, its benefits, and its excesses. She couldn’t have children and she has nine today. Tai was the first, 11 years ago. She responded to an ad on the internet. An American woman offered to give her 4-year-old adopted boy from China because she had a hard time bonding with him, she found the boy’s ears and feet were too big. When Megan saw his photo, she found that his ears were beautiful. The next day the adoptive mother asked her to be his new parents. They took him and officially adopted him three months later. Megan thought she could reach other families to find happiness and she joined a group of private discussions on the Internet where we talked about re-adoption, where we can freely exchange children on the web. Very quickly, she became the intermediary between the adoptive parents who wanted to give their child and people who wished to adopt her.

In 2007, a woman joined the group under the pseudonym Big Mama. The person behind the Big Mama is Nicole Eason, already known by social services. Her children were kidnapped for ill-treatment. Her husband, Calvin, is suspected of pedophilia, but no one checked their background. Finally, the fraud service on the internet alerted Megan on the true profile of Big Mama. Too late, she had already taken a little girl for fifteen days. Megan had only played the role of the middlewoman, but she crossed the US to the Easons.

When she arrived there was only the husband. It was a horrible house, without a door, they all slept in the same room… Without real evidence of ill-treatment, the police couldn’t intervene, so she took the child with her. The little girl asked her if she’ll be sent to other people again. Megan then made the commitment that she’ll never go anywhere else.

37min [Interview with Poppy.] Today, the little girl is a 16-year-old teen, Poppy. Megan kept her promise, she adopted Poppy, becoming both the one who sent her to hell and the one who saved her. Eight years later, a police check led to the arrest of Eason. The police found other children they adopted on the Internet. Poppy and Megan are among the prosecution witnesses.

42 min. [Interview with Bill Stutley, the director of The Ranch for Kids. A re-education center for adopted children.]

Every year, there are fifty children. These children were adopted abroad by American families and proved to be violent or temperamental. They are in the center 24/24, 7 days a week, for therapy. If re-education does not work, re-adoption will be considered. [A teacher interrupts an interview with a child, they are not allowed to interview the children]. Alec is 16 years old, he’s the oldest brother. He lives in a room he shares with nine other boys for six years. The stay is unlimited. The director refuses to answer why the boy is still at the center after six years. Alec will stay at the ranch until the age of an adult. His parents visit him from time to time. A few days after the shooting, the boy who was interviewed is advertised on the FB page for re-adoption.

50 min. [Megan and Poppy going to testify at the Easons trial]. Megan says re-adoption has been something beautiful. It went wrong for Poppy at some point, but it’s what created their family. �Following this case, the state of Illinois has limited the practice of re-adoption. For any transfer of custody, parents must go before a judge under penalty of imprisonment. Private ads are strictly forbidden, but 9 states followed their direction. In the rest of the country, trafficking continues.

Credit Kim Goudreau (for the translation).

Adoption: What You Should Know is a rare deep dive by the co-founder of Adoption Truth & Transparency Worldwide Information Network offers the data you need to know to make informed decisions about the practice.