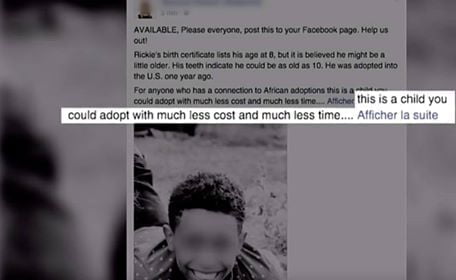 “Lawmakers on Capitol Hill have been alerted by the media to the worrying trend of so-called online re-homing for adopted children. The term describes transactions between foster parents who want to get rid of kids they regret adopting, to strangers who can’t or won’t adopt through legal channels. Marina Portnaya investigates what turns out to be a thriving practice.”
RT  Published on Nov 12, 2013
Read:

By Megan Twohey
Ever wondered what it’s like to be adopted? This anthology begins with personal accounts and then shifts to a bird’s eye view on adoption from domestic, intercountry and transracial adoptees who are now adoptee rights activists.  Adoptionland: From Orphans to Activists.
Ever wondered what it's like to be adopted? Read Adoptionland: From Orphans to Activists.