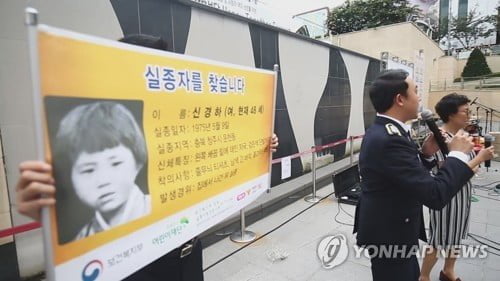 (Seoul-Yonhap News) Kwon, Yeong-jeon, a police officer, has conducted a 100-day intensive investigation into children and disabled persons who have been missing for over a year.

Among them, there was a possibility that a brother and sister who were missing in 1982 could have been adopted overseas, and there were cases in which he confirmed the adoption by executing a search warrant to the Holt Child Welfare Foundation, the adoption agency.

He also found a 14-year-old child missing in December 2013 and arrested a man who was protecting the child without reporting it for violating the Act on Protection and Support of Missing Children and Others.

The team also stopped investigating the disappearances of 27 missing children and disabled people at the request of the family. It is the case that the family does not want to investigate disappearances due to various situation changes such as parents’ death or change of family structure.

The long-term team will continue investigating the case for more than a year with the disappearance of children and the disabled.

Police said they will cooperate with relevant agencies, such as revising the Special Act on Adoption to secure overseas adoption data.

Ever want to know why so many adoptees no longer tolerate the business of adoption? Wonder why so many adoptees disapprove of the practice and have banded together to fight for their rights to blood-family and adoption documents? The Unknown Culture Club, Korean Adoptees Then and Now.

Ever wondered what it’s like to be adopted? This anthology begins with personal accounts and then shifts to a bird’s eye view on adoption from domestic, intercountry, and transracial adoptees who are now adoptee rights activists.  Adoptionland: From Orphans to Activists.