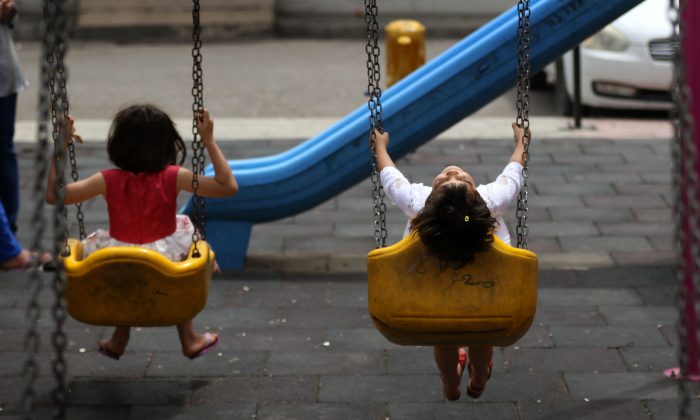 Global adoption is a big business, fraught with loose regulations and profit incentives that have made it a target for kidnappers, human traffickers, and pedophiles.

Despite regulations on international adoptions, and with some countries even banning all foreign adoptions, the problem has continued. Kidnappers continue to fuel the trade, and adoption agencies continue to skirt the laws.

“What I stumbled on was horrific,” said Ed Opperman, a private investigator and host of “The Opperman Report” radio show.

Opperman began investigating cases of parents trying to locate their real children and of kids looking for their real parents. In some countries, “there’s no vetting whatsoever,” he said. “There is money to be made in this adoption business.”

“You can go to Thailand and countries in Africa and just pick up a kid, and come back to America with no paperwork,” he said. Even Russia, which has acted to crack down on international adoptions, has only minimal red tape that includes a test, a background check, and a waiting period.

In July 2014, a new U.S. law went into effect that required federal review and accreditation of all U.S. adoption agencies. The Intercountry Adoption Universal Accreditation Act of 2012 was passed amid widespread reports that kidnappers were selling children to foreign orphanages, sometimes with the cooperation of what appeared to be legitimate humanitarian groups.

Guatemala banned international adoptions in 2007, at a time when close to 1 out of every 100 children born in the country were being adopted by foreign parents. In 2011, investigative journalist and author Erin Siegal McIntyre obtained memos from the U.S. Embassy in Guatemala that showed children were being kidnapped for the industry, and that mothers were being threatened with death for attempting to locate their children.

After the foreign adoption industry in Guatemala was shut down, and after Guatemala adopted international standards on foreign adoptions under the Hague Abduction Convention, the international adoption market went elsewhere and the local criminals looked for new streams of revenue. However, the abuse of adoptions didn’t end. In Sight Crime reported in 2013 that in Guatemala, “illegal adoptions continue to flourish despite regulations,” and that “the majority of stolen babies are sold for irregular adoptions or for their organs.”

While the 2014 U.S. law ended the “wild west” state of the international adoption business in the United States, which had been mostly untouched by federal regulation and oversight, the law did little to solve the problem.

In 2016, Uganda tightened its foreign adoption laws, according to Reuters, to restrict “fast-track foreign adoptions” in which children with living parents could be kidnapped under the guise of adoption in just days. Reuters stated that hundreds of children were taken from Uganda, mainly to the United States.

In India, children up for adoption have been referred to as “manufactured orphans.” India’s First post news outlet reported that in 2016, a “kidnap-for-adoption” racket was uncovered in Kolkata, where an adoption agency was found guilty of stealing infants from “impoverished unwed mothers, rape survivors, and marginalized families.”

It stated, “In many cases, healthy babies were substituted with stillborns and the mothers were told their babies had died. Sometimes, poor parents were made to sign documents which they did not comprehend. They thought they were admitting their children to a free residential school but actually ended up giving up all rights over them.”

In 2017, police in India arrested the heads of an adoption center that was selling children to foreign couples for between $12,000 and $23,000 per child.

The problem has continued even in the United States. In 2017, the FBI raided the agency European Adoption Consultants in Ohio, where news outlet WKYCreported allegations that the enterprise failed to adequately supervise adoptions for “preventing the sale, abduction, exploitation, or trafficking of children.” European Adoption Consultants was also reported to have failed to prevent the “solicitation of bribes” and to have fraudulently obtained birth parent consent.

According to Peter Gleason, a lawyer and former police officer in the New York Police Department, the problem of child trafficking through adoption agencies is well-known. “It’s out there,” he said. “They’re exploited for child labor, for sex, you name it.”

Human traffickers also take advantage of natural disasters. Australia’s ABC News reported that in the wake of Haiti’s 2010 earthquake, “trafficking networks were springing into action immediately after the disaster and taking advantage of the weakness of local authorities and relief coordination” to kidnap children.

This issue hit the headlines when Laura Silsby, the former director of The New Life Children’s Refuge, was arrested with nine other American nationals for trying to bring 33 children across the border into the Dominican Republic without documentation.

Silsby initially claimed the children were orphaned or abandoned, but the Haitian government and the charity SOS Children’s Villages found this wasn’t true; none of the children were orphans, as all had at least one living parent. Silsby’s legal adviser, Jorge Puello, was also detained in an alleged human trafficking ring accused of bringing women and children from Central America and Haiti.

Former President Bill Clinton, who was then coordinating relief efforts in Haiti, intervened to have all co-conspirators in the case released, except Silby. Yet prosecutors reduced her charges from conspiracy and child abduction to “arranging irregular travel.”

Among the other ongoing issues, according to Opperman, is that of “re-homing,” in which people can adopt children, then pass the children to new parents with almost no regulation.

“There’s a whole network, there are message boards, there are Yahoo groups of all these people who’ve got these kids. They don’t want them anymore, and they re-home them,” Opperman said.

He said child advertisements can include statements of pre-teen children being “sexually aggressive,” having problems with substance abuse or being “very eager to please.”

“There’s no paperwork. What they do is they give you a power of attorney, that ‘here, you can enroll my kid in school, you can take him to the doctor,’ and that’s it. The kid’s gone,” he said. “And there are documented cases where these kids, they wound up with pedophiles.”

After they’re in the United States and handed off to less regulated forms of adoption, the children are more likely to face abuse.

Geoffrey Rogers, CEO of the U.S. Institute Against Human Trafficking, said that “approximately 60 to 70 percent of kids that are trafficked in the United States come out of the foster care system.”

According to a 2015 report from the Arkansas Journal of Social Change and Public Service, “re-homing is not regulated; there’s no legal framework to address it,” and it’s “mostly an underground affair.”

With domestic adoptions, there are processes and procedures for the rights of birth mothers, for future adoptive parents, and for the welfare of the children. The report states, “These safeguards are often absent when parents adopt children from overseas.”

“This is because children born in U.S. hospitals or to U.S. citizens benefit from reliable documentation that is often absent in international adoptions, which creates a greater risk of unethical conduct than in domestic adoptions,” the report states.

Opperman noted that the situation for children adopted from overseas also differs heavily across states. Among the states with the weakest regulations, he said, is Utah, and he noted that some adoption agencies will choose to establish their office in the states with weak oversight. “There are a couple states where it’s just a free for all—you can do whatever you want. Even if the adoption goes through in Florida or New York, they’ll do the paperwork out of Utah.”

Opperman said, “There’s really no vetting done with these private adoptions whatsoever. Once they take place, nobody knows where these kids went.”

By Joshua Philipp, The Epoch Times (Reprint Permission)
Photo: Two displaced Iraqi sisters from Mosul, play at an orphanage in Arbil, the capital of the Kurdish autonomous region in northern Iraq, on April 30, 2017. (SAFIN HAMED/AFP/Getty Images)