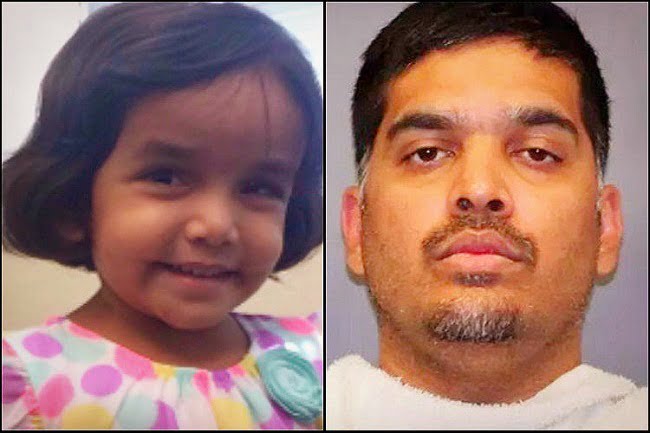 Wesley Mathews, the father of his adopted child Sherin Mathews – who was three years old when she was found dead in 2017 in Texas, was sentenced to life in prison by a jury last week, after he pled guilty to a lesser charge of injury to a child by omission.

Sherin Mathews, according to the autopsy report, died of “homicidal violence” on October 7, 2017 after she allegedly choked on milk while being “physically assisted” by her adoptive father.

The 39-year-old Wesley Mathews from Richardson took the witness stand Tuesday afternoon and Wednesday morning where he answered questions about the decisions he made on the night of Sherin’s death, reported CBS News of Dallas Fort Worth.

The original report from Mathews claimed the child disappeared, which triggered an Amber Alert. Her body was eventually found inside a culvert near their Richardson home.

As Mathews’ story changed, he ultimately stated that she died after choking on milk.

“I tried to gently shake Sherin so she would be out of that spell but nothing was working and in a matter — pretty soon her head started going different directions and her head came to a still,” Mathews said. “I truly am sorry. I don’t have words to express how sorry I am to these fine officers, these fine people who were full of love and concern for my baby Sherin and they devoted a lot of time and effort and I could have easily stopped that.”

During his time on the witness stand, Mathews also addressed questions about why he didn’t immediately tell his wife, Sini, or police about what happened. He was also frequently asked about the lies he told authorities during the investigation, reported CBS News.

Mathews admitted to putting Sherin’s body inside a bag and into the culvert. When shown the bag that Sherin was in, Mathews testified it was a “blue” bag rather than a “trash” one, which prosecutors continually called.

He also took issue with the prosecutors saying he “dumped” her body, and he called the culvert “a place to protect her body.”

On Wednesday, he referred to the way he handled Sherin’s death as a “mistake” due to not seeking the proper help.

Authorities on Tuesday testified that there were a lot of red flags and suspicion about the case involving the Richardson man. He had been accused of murder and was read his rights during a police interrogation.

Mathews’ wife, Sini, was initially charged with child endangerment during the investigation, but those charges were later dropped due to lack of evidence. She was seen — her face stoic — exiting the courtroom after Judge Amber Givens-Davis read the jury’s decision.

The Dallas Observer reported that according to testimony from doctors, Sherin showed significant signs of abuse during the year between her adoption by the Mathewses from India and her death.

Dr. Susan Dakil, a pediatrician certified in child-abuse pediatrics, testified that X-rays revealed multiple fractures in Sherin’s arms and legs. Because of the way the injuries had healed, Dakil said, she was confident that the injuries happened after her adoption. The doctor also said she didn’t believe Sini Mathews’ assertion that Sherin broke her elbow when her older sister pushed her off the couch.

When Dakil reported her findings to Sini Mathews, the mother said she disagreed with the findings and told the pediatrician that a report to Child Protective Services would “ruin her weekend,” Dakil said.

Prosecutors said Mathews’ actions were callous, rather than protective.

CNN reported some bizarre statements made by Mathews in his testimony during the trial.

After over an hour of testimony on Tuesday, Mathews explained how he disposed of his daughter’s body.

“I refused to believe that my child had completely gone from this world,” Mathews said. “I believed that if I prayed hard and strong enough that God would bring my child back.”

When asked why he decided to take matters into his own hands and not seek help from authorities, he said he was in disbelief.

“I was being driven by fear. Fear of CPS, fear of how Sini is going to take this piece of news and fear of losing my house and family,” he said.

News India Times had reported earlier this year, in January, that the Indian government suspended an American adoption agency for “negligence” in its assessment of Wesley and Sini Mathews during the adoption process for Sherin.

The then Women and Child Development Minister Maneka Gandhi took the decision to suspend the Authorized Foreign Adoption Agency (AFAA) and the government wrote to the Indian Embassy in the U.S. as well as the Central Authority, which is the nodal body for adoptions in the U.S. and Holt International, informing them about the decision, reported PTI.

“We have suspended the operations of Holt International because we found it negligent in the assessment of the adoptive parents and also in the post placement assessment of the family,” Lt. Col. Deepak Kumar, CEO of Child Adoption Resource Authority, told PTI, adding that the decision on cancelling the AFAA’s authorization will be taken after they receive detailed reports from the Indian Embassy and the Central Authority.

Even the then Minister of External Affairs Sushma Swaraj sought a probe into the “adoption process” after hearing of Sherin’s tragic death in October.

After the incident, Child Adoption Resource Authority has made mental well-being of NRI applicants seeking to adopt a child in India, an important criterion for determining their eligibility.