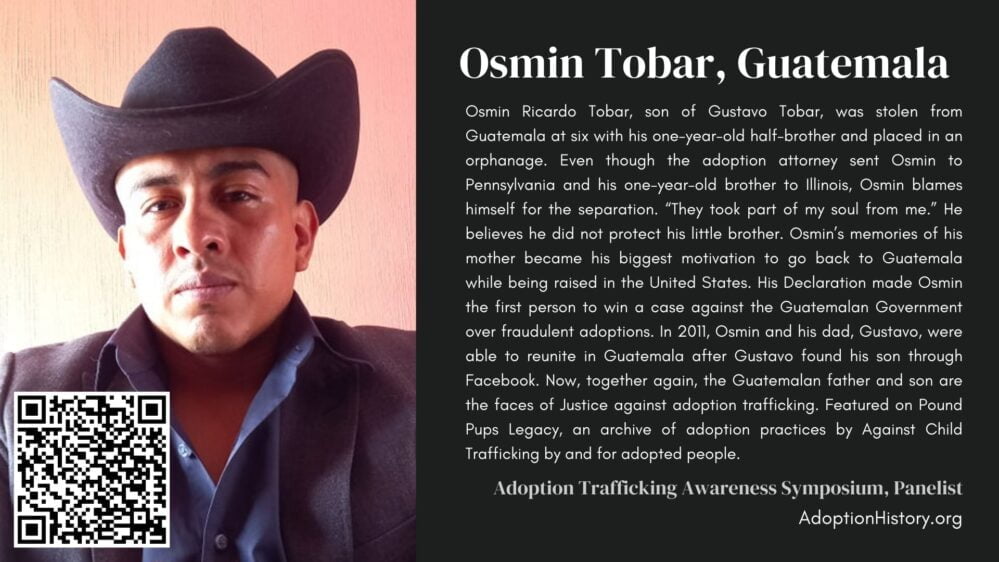 Over 30,000 children in Guatemala were adopted internationally decades ago and learned they were trafficked for adoption.

The memory of the day Osmin Tobar was taken from his mother in Guatemala has been replaying in his head like a broken record since he was seven years old.

Guatemalan authorities took him in 1997 after they allegedly received reports that he had been abused and abandoned by his mother — allegations they didn’t bother to verify. Instead, Tobar was whisked away and spent two years in a children’s home before a family in Pennsylvania adopted him.

“The biggest motivation I had to return to Guatemala was the memory of my mother,” Tobar, 30, a father of two boys, told NBC News.

As Tobar yearned to be reunited with his mother for over a decade while living in the U.S., his father, who had been separated from his mother, was trying to reverse a declaration of abandonment — the legal move that allowed the Guatemalan government to put Tobar up for international adoption without his father’s consent.

Tobar left Pennsylvania and moved to Guatemala after reconnecting with his biological parents in 2011. However, he has struggled with keeping a good relationship with both his biological and adoptive families.

In 2016, he took his case to the Inter-American Court of Human Rights in Costa Rica. He declared that no one asked him whether his mother mistreated him before putting him up for international adoption.

Tobar also said that authorities didn’t ask him whether he preferred to live with another family member before being taken to a children’s home.

Tobar’s declaration made him the first person to win a case against Guatemala over fraudulent adoptions. As a result, the Guatemalan government was forced to admit it enabled years of misconduct.

“That day in court made me realize this was bigger than just me,” Tobar said. “It gave me more passion and fire to be outspoken and not be afraid of holding people accountable.”

While Tobar is still waiting on the Guatemalan government to make reparations on his case, the woman who facilitated his adoption is currently serving an 18-year sentence for child trafficking.

Listen to Osmin Tobar at the Adoption Trafficking Awareness Symposium on June 18th, 2022 at the Washington State History Museum. Get tickets here.