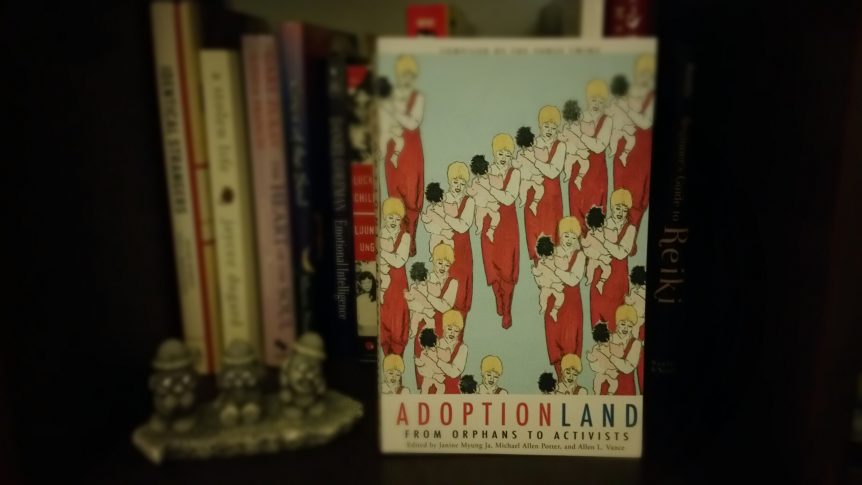 Did you know most children who are adopted internationally are not actually orphans but have been given the label in order to be processed overseas?

If you were adopted, if you have lost a child to adoption, if you are a member of a family that has been separated by adoption, or if you have worked on behalf of the victims who have been trafficked for adoption, you are not alone.  This collection was compiled for you and will validate your adoption experience.

For more than sixty years, facilitators have promoted their own versions of the adoption story.

Now it is our turn.

In the past, adopted people have accepted incomplete paperwork, dismissed our origins, and accepted our second-class citizenry.

A global human rights movement is now in motion that values people over profit and family preservation over adoption separation.  With this new collection, we are proud to present some of the loudest and softest voices in this international campaign for social justice.

"I have always thought that I may one day adopt a child from a third world country and then I read this book. Boy, I am so glad I did. When I would hear about child trafficking, I always assumed it was “sex trade” I had no idea that it could also include adopted children. Please do your research before you even think about adoption and if you do, look in your own community, state, and country."

”AdoptionLand is a vital contribution to a new genre of books, films, documentaries, and blogs intending to #FlipTheScript on adoption by giving voice to those who have been muted, disregarded, and marginalized as disgruntled, "bitter" or "angry." AdoptionLand should be required reading by adoptive and pre-adoptive parents, anyone considering placing a child for adoption, lawmakers, all who work in the field, and all who are concerned with social justice, human rights, and child rights. It is also highly recommended for anyone wanting to know what it's like to be adopted."

"This is a must read for anyone. A captivating book that brings us the voices of those who live the consequences of adoption. The world at large should listen and draw conclusions. We cannot undo mistakes happened in the past, but we can make sure that such mistakes will not happen again."

"Our continued social activism in books like ADOPTIONLAND will provide healing and answers to those still lost due to adoption and counter the adoption policies, propaganda and practices that countries and institutions still refuse to deal with, even in 2014."

"Adoptionland is an insightful and groundbreaking anthology of essays by adoptees and other victims of adoption-loss who are now activists. It is a must read for anyone with an interest in adoption, migration research, human rights or anti-racism, as well as for adult adoptees, their partners and allies. Very highly recommended!"

"...The last years have brought new insights from an institution shielded by secrecy. A recent book, Adoptionland: From Orphans to Activists gives the perspective of the adoptees...."

For far too long "adoption" has been allowed to continue unchecked. For far too long - fifty, sixty years at least - we have not "heard" the stories from Adopted Persons and First Parents. It was incredibly difficult reading the stories from the first mothers and one from a first father. The highlights of the Irish adoption trade were just terrible. Hearing from transracial adopted persons (Korean persons procured for adoption and trafficked to Norway, Sweden, and the USA) is a must-read.