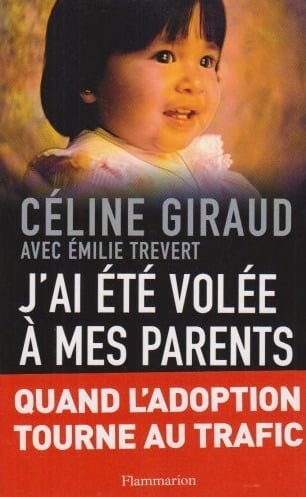 J’ai été vole à mes parents (which in French means “I was stolen from my parents”) is a true story of Céline Giraud, a French woman of Peruvian origins, written by herself with the collaboration of a Émilie Trevert, a French journalist. (1)

Céline Giraud was adopted from Peru by French parents at the age of 16 days old in 1980. She had a happy childhood in a modest and caring adoptive family. Her parents left her adoption record within easy reach and they gave it to her when she left home at the age of 18. They tried to inculcate Peruvian culture in her, but she showed no interest in her origins until she become a mother at 20 years old. “For twenty years, unconsciously, I rejected my roots,” she says.

After giving birth to her daughter, she starts going out every night to find Latino people to discuss about her homeland and she learns Spanish in four months. In February 2004, she decides to track down her biological parents.  Her adoption file contains the name of her mother and her village. At that time she is dating a Peruvian boyfriend whose father is police officer in Peru. It takes him only a few weeks to find her mother. She learns the shocking truth:  she was not abandoned, she was stolen from her parents by child traffickers and then sold on the international market of adoption.  Céline goes to Lima in April 2004 to join her family who welcomes her triumphantly. She discovers she has a younger brother, a younger sister and an older sister. Her family never forgot her and celebrated her birthday every year, in sorrow. Once the shock wore off, Céline tracks back and finds 25  babies were stolen like her and adopted to France, Switzerland and Holland in the early 80s.

In 1980, Cristina, the biological mother of Céline, was going through great difficulties while pregnant of Céline. One day she heard on the radio an advertisement of a charity helping expectant mothers in distress. Delivery costs, food during pregnancy and clothes for the future baby  would be provided. Being very religious, Cristina considered this as a miracle.  At childbirth, they offered to put her baby in a nursery for free so she could continue working and they made her sign a blank paper for registration. She trusted them so much that she called them her guardian angels and she named her baby Doris after Dora, the couple’s daughter who saved her. Three days after the birth, she and her baby were separated. She didn’t see her baby again. Each time she wanted to see Doris she was told it was impossible: the baby was sick, children were quarantined, slum people were carriers of germs… After several unsuccessful attempts to see her newborn, Cristina went to the office of the organization, but she found a closed door. Her “guardian angels” had moved. She filed a complain for child kidnapping, without result.

Meanwhile, the prospective parents of Céline approached Rayon de Soleil, a French organization approved by the State, which informed them a baby was available in Peru. The sum to be transferred to a foreign account (F 22 000 at the time) had to be transferred to the Peruvian intermediary, in addition to $ 900 for accommodation expenses. On site, an organization called San Benito de Palermo showed them the baby and the photo of the mother, claiming she was 16 and that Céline was her first-born baby from an unknown father. In fact, Cristina was 23 years old, mother of a 2 year-old girl, and her husband had left her. The only truth is that she lived indeed in a slum. The Girauds flew off from Lima to Paris with Céline in their arms, unaware that the baby was stolen and has already a name, Doris.

In 1984, thanks to a local journalist in Peru, the scandal was exposed and a lawsuit followed.  The aggrieved mothers learned that their children had been adopted abroad – without obtaining the right to get them back. The traffickers who sold Céline were sentenced to 27 years of imprisonment. They had stolen and sold 24 other babies like Céline. But they were released on appeal after two years behind bars. The scandal was huge but it did not cross the Atlantic and stayed inside Peru.

When Céline discovered that a large majority of these stolen children were located in France, she alerted Rayon de Soleil to inform the concerned families (2). But the organization did not see fit to inform the families. Céline ended up contacting some of them herself. “But I stopped when some parents told me, “Oh, we have been warned that you would call”, and then called me crazy. That’s why, among other things I created later La Voix des adoptés (3) . So that those who wish, have the right to know and the possibility to search,” said Céline.

Since her discovery, Céline stayed several times with her Peruvian family. Her mother, her two sisters and her younger brother, and also her father who had returned home before deserting again, welcomed the young woman as a “resurrected” person. She needed time to “adopt” them. “They knew that I existed while I had to start from scratch our relationship.”  For Céline, her parents are those who raised her and her Peruvian mother understands that well. She provides them with material support; her adoptive parents also help them. The adoptive parents of Celine and her Peruvian biological mother exchanged letters and photos. Two years after reunion, they  also met in Paris. (2) + (4)

Rayon de Soleil, the organization which allowed these adoptions in France, was approved by the State. Yet in Peru, the local intermediary of this organization had no official recognition and even less an authorization for adoption. By investigating Rayon de Soleil, Émilie Trevert discovered that it was suspected of two other “trafficking” of children, one of which took place in Central Africa, neighboring country of Chad. In 2002, after a coup d’État, 13 children were adopted to France. Rayon de Soleil passed them off as AIDS orphans. Some of them later revealed to their adoptive families that they had parents, in good health. Only one of them had really lost its parents. (5)