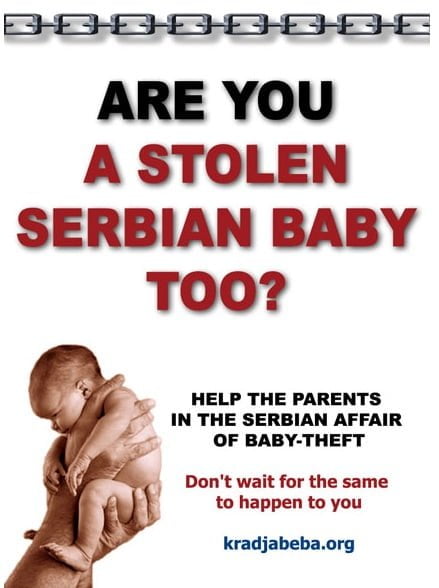 Instances of newborns disappearing in Serbian hospitals have been reported for decades. But only in recent times has the government come under pressure to take action. Hundreds of parents say they were told by doctors that their babies died shortly after birth. But they were never allowed to see the body.

An association representing the parents says between 6,000 and 10,000 babies are believed to have been separated from their mothers at birth and sold for large sums of money to adoptive parents abroad. For years, many of the parents have been fighting to have their cases investigated. Now the Serbian government is working to tighten legislation to stop the practice from continuing. But the action comes too late for all those parents who never got to see their children grow up.

Instances of newborns disappearing in Serbian hospitals have been reported since the 1970s, but little has been done to bring the perpetrators to justice and end a horrifying practice that appears to have persisted until the late 1990s.

The purported discovery of several “missing” children, alive and growing up in adoptive families, deepened the conviction felt by many parents that their babies were snatched away after being declared dead.

Although such cases drew media attention at the time, and despite strong pressure from parents, the Serbian authorities have largely turned a blind eye to the allegations. More than 700 people have filed complaints over their babies’ suspicious deaths in delivery clinics, but investigators have not solved a single case.

In the early 2000s, dozens of families joined forces to lobby for a thorough probe. Their efforts resulted in the creation of a parliamentary committee tasked with looking into the possible trafficking of newborn babies.