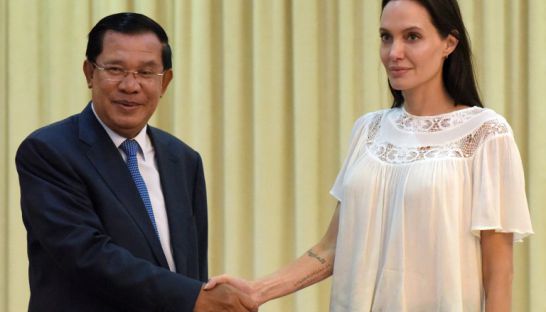 The Ministry of Social Affairs yesterday denied there was any truth to the suggestion that Angelina Jolie Pitt was in the process of adopting a second child from Cambodia.

The rumour, which stemmed from a story published by US gossip website Radar on Monday, claimed Jolie Pitt had pledged to adopt a baby called “Shoun Allouy” – the youngest child of an impoverished family she met in Siem Reap.

“I saw [the news] on Facebook, but actually it’s just a rumour,” said Sao Samphois, a spokesperson for the ministry’s Inter-Country Adoption Administration.

Samphois clarified that the ICAA had had no contact with Jolie Pitt during her trip to Cambodia last month, and pointed out that there was no legal mechanism in place for such adoptions.

There has been no bilateral agreement on adoption between America and Cambodia since 2001, when America suspended adoptions over trafficking concerns.

“The adoption between the two countries is not yet open,” Samphois said.

She added that while Cambodia was currently working to reopen international adoptions, only Italy has yet to sign on as a potential recipient country.

Jolie Pitt was in Cambodia in December filming an adaptation of Loung Ung’s Khmer Rouge memoir First They Killed My Father. Her 14-year-old son Maddox, who was adopted from Cambodia as a baby, has been involved in researching the film.

The story was picked up by major news outlets, but with no confirmation aside from the original unnamed insider. A request for comment from a representative of Jolie Pitt was not returned as of press time.