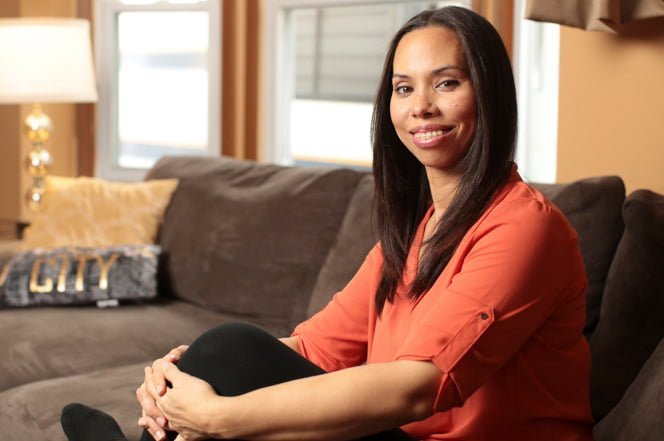 Jenny Thomas has known she was adopted since the age of 4. With very little information known about her birth mother (besides that she was from Rochester, NY, where Thomas, 40, still lives), she would find herself peering into women’s faces, wondering if any could be her mom.

After spending more than 15 years intermittently trying to track her down on the Internet, it wasn’t until Thomas signed up for the new TLC reality show “Long Lost Family” that she learned the truth: She had not only seen her birth mother before, but worked alongside her for two years.

“I was just in shock,” Thomas tells The Post of first seeing her mother’s photograph. “I had looked in so many faces for so many years, [thinking] ‘Could that be her? Is she looking at me because she knows me?’ All the while I had looked at the woman who once knew me as her daughter.

“I didn’t expect that, not in a million years.”

The two women met 10 years ago, when Thomas was working as a part-time patient care technician at a Rochester hospital, and her mother, Nita Valdez, was a patient transporter. They interacted on a regular basis to move patients from their rooms to rehabilitation therapy, and while Thomas says they worked well together, she never noticed a physical or emotional connection.

“She’s very quiet, funny. I’m comical, so she would always laugh at my jokes, so that was a plus,” Thomas says. “We never went past a working-professional relationship at all.”

Thomas’s tale is one of 16 stories featured in “Long Lost Family” (premiering Sunday at 10 p.m. on TLC), which seeks to reunite people searching for their biological relatives — such as foster children looking for birth mothers, parents looking for a child they placed for adoption, or a woman seeking her biological father after learning the dad who raised her isn’t a blood relative. Two hosts — themselves adoptees — then use public records and DNA testing to try to track down the missing family members for an on-camera reunion.

Series participants Teri and Gusty Graham of Katy, Texas, went looking for the son they placed for adoption as teenagers. They lost track of their boy after the letters from his adoptive parents mysteriously stopped when he was 8 or 9 years old. The Grahams, who married two years after their son was born, later had four daughters, who knew about their biological brother and would post messages on social media hoping to find him.

“We always celebrated his birthday,” says Teri, 43. “We would talk about, ‘Where do you think he would be at this point in his life?’”

For Thomas, now married with four children and a stepson of her own, seeing Valdez again on the TV series after realizing their connection was “very powerful, very surreal.” She also got long-desired answers about why she was placed for adoption: Valdez was 17 when she got pregnant and her minister father was unsupportive.

“I wanted to know if she was OK, is she good, is she happy in life?” Thomas says. “I hoped that she could build a relationship with my children … especially with my [20-year-old] daughter, who is at this age where she really could benefit from a great relationship with a grandmother figure, a family member that shares our DNA.”

(How Thomas’s relationship with Valdez progressed after their reunion will be revealed in the March 13 episode.)

In the Grahams’ case, reuniting with their now-24-year-old son was an unbelievable, overwhelming experience, especially for Gusty, 41, who wasn’t able to be present for his birth.

“[We’ve] thought of this event happening for 24 years, and it finally came full circle,” he says. “We couldn’t stop staring at him. I was touching his face, saying, ‘You’re a real boy.’”