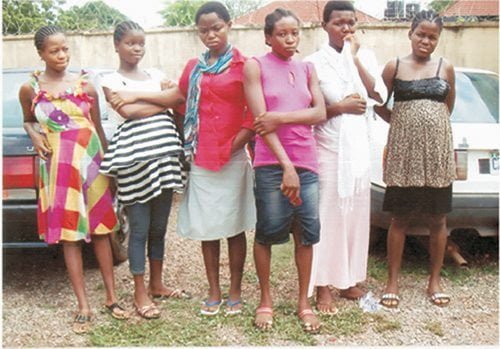 Enunu, Nigeria — Four months pregnant, Ugwu Christabel, a scared 17-year-old from Aku in southeastern Nigeria, looked to the heavens for help after her parents threw her out of their home.

Then she looked to the Tex Hospital and Maternity Home in nearby Enunu, where single, pregnant girls sometimes go for care until they give birth.

She didn’t have anywhere else to go.

“When my boyfriend realized I was pregnant, he warned me not to ever mention his name, and threatened me,” she said. Her parents could not stand the shame of their daughter getting pregnant out of wedlock.

What she thought was a sanctuary turned out to be what is locally known as a “baby mill,” which delivers infants only to sell them to would-be parents on the black market. Her baby was taken from her and sold against her will.

In Nigeria, the baby mill industry has become a type of child abuse and human trafficking, say local officials and aid groups. More than 3,000 women and girls became victims of baby mills last year, and hundreds of people have been convicted in the past two years, said Magnus Obi, a human rights activist based in Oweri, in southeastern Nigeria.

Those who run the baby mills usually lure pregnant women and girls with promises of shelter and medical help, officials said. Sometimes, the incentive is money.

In what UNESCO calls a “more treacherous dimension,” imprisoned young women are “forced to sleep with men employed by the baby factory operators to impregnate them. Such babies are traded upon conception and a price paid for them in their first few days of postnatal life.”

Societal attitudes play into the phenomenon.

Ikechukwu Okafor, a child rights activist based in Enunu, said the disapproving attitudes of parents toward pregnant daughters is one reason girls seek out such centers.

“Most of these girls are left to live on the streets by parents who couldn’t accept that their daughters are pregnant without husbands,” he said. “They send them away from home, and such girls are easy prey for unscrupulous persons who conscript them into baby factories.”

Rigorous adoption laws coupled with societal demand for married couples to have children — particularly boys because only they can inherit property in local Igbo society — have fueled the growth of baby mills in southeastern Nigeria, said Stephen Ezeadilieje, a lawyer based in Enunu. Igbo is the predominant tribe in southeastern Nigeria.

Gladys Uche of Enunu confessed to buying a baby for $2,000 from one of the baby mills out of desperation. She blamed her predicament on the Igbo tradition that gives male children a preference over females. She already has a daughter.

“There was so much pressure on my husband and I to have a male child,” she said. “I bought the child to satisfy the demand by our extended family for a male child.”

And then there is a financial incentive.

“Some of these girls, after realizing they can make some money selling their unwanted babies, turn it into a hobby, getting pregnant again and again only to sell the babies to willing buyers,” said Mr. Okafor.

Charity Nwanko, 23, who hails from Obosi in southeastern Nigeria, said she has sold three of her newborns via a baby mill to childless couples because the money helps her live the way she prefers.

“As you can see, I buy expensive clothes, jewelry, and my cosmetics don’t come cheap,” she said, pointing to her outfit and accessories. “Not only that, I sell my babies only to parents that can afford it, believing that my children would be raised properly and comfortably.”

Victor Ogbonna, an official of the Nigeria Security and Civil Defense Corps, a government agency involved in fighting the baby mills, said pay to the women is low compared with what the babies command from buyers.

Although some sell their babies voluntarily or unknowingly, others are unwilling donors and are often held against their will during their pregnancies.

Soldiers broke up a notorious baby mill last month in Enunu after a tip from a victim who escaped the secured facility, which was posing as a hospital. Officials from the National Agency for the Prohibition of Trafficking in Persons said the soldiers found 10 other pregnant girls waiting to give birth and who were not allowed to leave.

The girl who escaped detailed how she was told soon after her birth to take a shower, the anti-trafficking officials said. When she returned, her baby was gone. The “nurse” offered her roughly $400 and told her that her baby had been given to a couple who could not have children.

“Any girl who came in would not be allowed to go outside again until after delivery,” said Chichi Uzor, 23, who was rescued from another baby mill, according to documents from the anti-trafficking agency.

Chamaka Obi, 17, from  Owerri in southeastern Nigeria, wanted to keep her baby after giving birth four years ago, but traffickers and her father forced her to sell it.

“When I got pregnant, I went to my father who is a pastor. At first, he demanded I get an abortion, but I refused,” she said. “He then took me to a doctor where I had to stay until my baby was delivered.

“The day [after delivery], the doctor came and snatched the baby out of my arms and gave it to a woman. She took off in a red car with my baby,” she said.

The woman would later be implicated in 18 cases of baby trafficking.

When Chamaka came home after the delivery, her father gave her a new cellphone as compensation.

“I later found out that he had bought it with the money he got for my daughter,” she said, holding back tears. “I don’t want a phone; I want my child.”