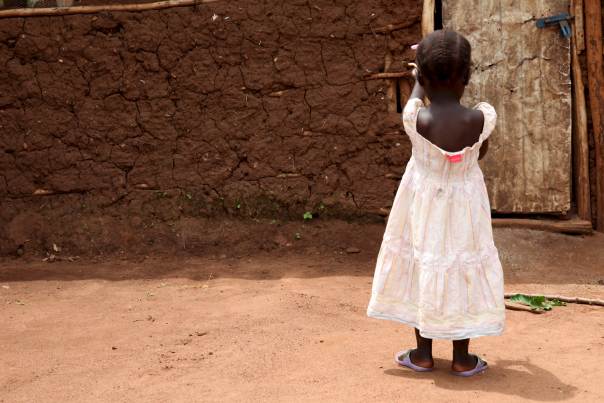 By Katy Migiro and Tom Esslemont

KAMPALA/LONDON, May 28 (Thomson Reuters Foundation) – The first time Jaja, a Ugandan woman, saw her one-year-old granddaughter, she was in the arms of an American man who she was told had “bought” the child.

The toddler was sitting with the man and his wife, eating biscuits and drinking juice, as they sought legal guardianship over her in Uganda’s High Court.

“I was in great pain,” the girl’s 47-year-old grandmother said. “I was sure, since they had bought the child, there was no way we would get her back.”

Although informal adoption is common across Africa, less educated people sometimes use the term “bought” when they see white foreigners with African children, because of the assumption that their wealth has helped them to adopt the child.

It can take years to formally adopt a child in poor countries with cumbersome, overburdened legal systems.

In Uganda, foreigners can secure legal guardianship in a matter of weeks, sometimes before the child’s birth parents realise what has happened.

Uganda’s parliament is poised to debate tighter legislation that would ban legal guardianships in the East African country where families are regularly bribed, tricked or coerced into allowing their children to be adopted overseas.

The American couple was matched with the little girl in June 2013 by Bethany Christian Services, the largest adoption agency in the United States, which believed the child to be an orphan.

The couple flew to Uganda’s capital Kampala in October to gain legal custody of the child and bring her home, according to a report by a child welfare campaigner who the Americans asked to intervene in the case.

A police statement from July 2012 shows that a baby girl was left in a hair salon by a woman who said she was going to buy braids but never came back.

The salon handed the child to the police who referred her to Nsambya Babies Home, a Catholic orphanage set up in Kampala in 1958, where she lived for one year before being put up for international adoption.

A social worker at Nsambya, Justine Mpagi, told the Thomson Reuters Foundation that the home had decided adoption would be best for the little girl since they were unable to trace her family, despite advertising on radio and in newspapers.

“If a child stays in a home for so long, and there is no willing parent in Uganda, we place them for adoption,” she said.

As the Americans waited for the High Court decision on their bid for legal guardianship, they took the child to a guesthouse in Kampala, where they spent two months bonding with her, according to the child welfare campaigner’s report.

When the case opened on Nov. 13, the woman who had taken the child to the police suddenly changed her story.

“She stood up and told the magistrate that she knew the mother,” said Mpagi. “This lady had lied to everyone.”

The magistrate ordered the woman to bring the baby’s biological relatives to court.

In Uganda, the Bethany adoption agency used a local lawyer, Victoria Katamba, of Nkwanga and Partners, to handle the case.

“The child was never placed for adoption against her family’s will,” said Katamba in emailed comments.

Bethany said it relied upon a local media company run by one of Katamba’s close relatives to investigate the child’s background before offering her for adoption.

“When we approached them (the media company) in 2011, they were doing investigative journalism,” Tendai Masiriri, Bethany’s vice president, told the Thomson Reuters Foundation.

“I asked them if they could take on adoptions investigations as part of their portfolio and they agreed,” he said.

But their investigation failed to track down the child’s mother or grandmother.

Jaja only learned that her granddaughter was at risk of being adopted overseas when the woman who took the child to the police visited her home, seeking her help to block the adoption.

The woman said she had offered to take care of the baby a year earlier as the baby’s mother – Jaja’s 23-year-old daughter – had found work out of town.

When the woman visited Nsambya, she said she was told the child had gone on holiday, Jaja later learned.

“She wondered where she’d gone for a holiday as she was just a small baby,” Jaja said, seated barefoot on a pink and purple woven mat, chickens clucking behind her.

The woman traced the child’s mother and, together with Jaja, they appeared in court for the second court hearing on Dec. 2.

“As soon as her family was found … the application for intercountry adoption was withdrawn,” said Katamba, the lawyer hired by Bethany, the adoption agency.

Jaja recalled her daughter saying she would “go mad” if they refused to return her child. “She was ready to fight them and recover her by force,” Jaja said.

The High Court ordered the baby and mother to take DNA tests which confirmed their relationship.

“The white lady started crying. Some people were consoling her saying, ‘Don’t cry. We shall get you another child’,” Jaja said.

“They were not happy,” he said, adding that such cases where relatives were discovered at the last minute were “extremely rare”.

Two weeks later, the High Court judge dismissed the case and the little girl was returned to her biological family.

“Everybody was happy,” said Jaja, who is looking after the child because her daughter cannot support her.

“I am happy to have her here,” she said as the girl ran outside their simple mud-walled home with other grandchildren. “I am never lonely.”

Jaja said more should be done to stop fraudulent adoptions.

“Human beings should not be sold,” she said.