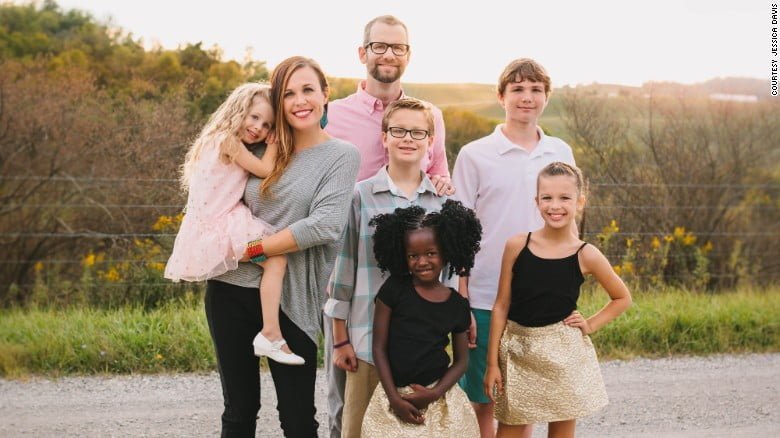 “CNN investigation has uncovered children purposely being orphaned, Mothers thinking they are temporarily giving up their children to be educated, instead, they’re sold to adoptive families who think they are taking an orphan in need.” Anderson Cooper

Adam and I thoroughly researched at each step of the process in the hopes of ensuring a proper and ethical adoption. You see, we were already parents to four biological children, so this was not about “having another child” or simply “growing our family.” For us, adopting was about sharing our abundance — our family, love, and home with a child who lacked these basic necessities.

Not one part of this process was easy — even the decision to adopt internationally. We knew that there were American children, as well as children all over the world, in need of what we could offer. We eventually concluded (based on what we now see as a form of propaganda) that the greatest need was in many of the poorest countries.

I remember reading that there are almost 3 million orphans in Uganda, and with that statistic in mind (and a bit more research), in October of 2013 we began the journey to adopt from there. We did piles of paperwork, got countless sets of fingerprints and spent tens of thousands of dollars. It took a little over a year to get through all the formalities, but I was driven to get to the best part of this process, meeting the needs of a child.

Eventually, we got to that point. In 2015, we welcomed a beautiful, strong and brave 6-year-old girl named Namata into our home. There is no one blueprint when it comes to adoption, but I attempted to do my homework as thoroughly as any adoptive parent could — still, nothing could’ve prepared me for what happened next.

It took a little over a year and a half to realize the things “our” child was telling us were not adding up to the stories told within the paperwork and provided to us by our adoption agency, European Adoption Consultants, Inc.

At first, I wondered if the conflicting information Namata was sharing with us reflected her efforts to cope with the trauma of being relinquished and abused. But I came to realize that she was telling me something vastly different — and vastly more important.

At many points during that year and a half, I had to suppress the compulsion to view the things she was telling me through my own lens, as all too often that lens is clouded by one’s own privilege and experiences. It was when I began to listen with this openness that I realized what she was so desperately trying to get me to understand.

The child we had struggled for years to adopt was not an orphan at all, and almost everything that was written in her paperwork and told to us about her background was not an accurate description of her life in Uganda.

By the time Mata’s mother realized what was happening, that she was never going to see her child again, she was powerless to stop the wheels that were turning. After many months of uncovering the details in our case, I have also come to realize Mata’s mother’s experience is not uncommon in international adoption.

There are villages in Uganda and across the world where mothers, fathers, siblings, and grandparents are desperate to be reunited with the children who were unlawfully separated from them through international adoption. It has been heartbreaking for me to realize that so beautiful and pure an act can be tainted with such evil. But as with so many beautiful things in this world, corruption and greed are a reality — one we can’t simply ignore.

For the complete article, visit here.