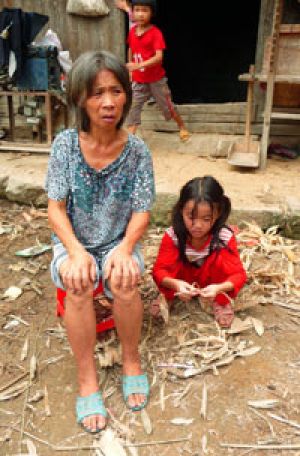 TIANXI, China: The man from family planning regularly prowled around the mountaintop village, looking for nappies on clotheslines and listening for the cry of a hungry newborn.

One day in spring 2004, he presented himself at Yang Shuiying’s doorstep and commanded: ”Bring out the baby.”

Yang wept and argued, but, alone with her four-month-old daughter, she was in no position to resist the man every parent in Tianxi feared.

”I’m going to sell the baby for foreign adoption. I can get a lot of money for her,” he told the sobbing mother as he drove her with the baby to an orphanage in Zhenyuan, a nearby city in the southern province of Guizhou.

In return, he promised that the family would not have to pay fines for violating China’s one-child policy.

Then he warned her: ”Don’t tell anyone about it.”

For five years, she kept the terrible secret. ”I didn’t understand that they didn’t have the right to take our babies,” she said.

Since the early 1990s, more than 80,000 Chinese children have been adopted abroad, most going to families in the United States.

The conventional wisdom has been that the babies, mostly girls, were abandoned by their parents because of the traditional preference for boys and China’s restrictions on family size. No doubt that was the case for tens of thousands of the girls.

But some parents are coming forward to tell harrowing stories of babies taken by coercion, fraud or kidnapping. Parents who say their children were taken complain that officials were motivated by the $US3000 ($3447) per child that adoptive parents pay orphanages.

Doubts about how babies are procured for adoption have begun to ripple through the international adoption community.

”In the beginning, I think, adoption from China was a very good thing, because there were so many abandoned girls. But then it became a supply-and-demand-driven market, and a lot of people at the local level were making too much money,” said Ina Hut, who resigned last month as head of the Netherlands’ largest adoption agency because of concerns about baby trafficking.

The Chinese Centre for Adoption Affairs, the government agency that oversees foreign and domestic adoption, rejected repeated requests for comment.

For adoptive parents, the possibility that their children were forcibly taken from their birth parents is terrifying.

Says Cathy Wagner, an adoptive mother from Nova Scotia: ”I love my daughter, but if I had any idea my money would cause her to be taken away from another mother who loved her, I never would have adopted.”

The problem is rooted in China’s population controls, which limit most families to one child, two if they live in the countryside and the first is a girl.

Each town has a family-planning office, usually staffed by Communist Party cadres who have broad powers to order abortions and sterilisations. People who have additional babies can be fined up to six times their annual income – fines euphemistically called ”social service expenditures”.

”The family-planning people are actually more powerful than the Ministry of Public Security,” said Yang Zhizhu, a legal scholar in Beijing.But the law does not give officials permission to take babies from their parents.

Some families said beatings and threats were used to force them into giving up their daughters. Others said they were tricked into signing away their parental rights.

”They grabbed the baby and dragged me out of the house. I was screaming – I thought they were going to knock me over,” said Liu Suzhen, a frail woman from Huangxin village in Hunan province. She was babysitting her four-month-old granddaughter one night in March 2003 when a dozen officials stormed her house. She said they took her and the baby to a family-planning office, where a man grabbed her arm and pressed her thumbprint on to a document she could not read. Once a child is taken to an orphanage, parents can lose all rights. ”They wouldn’t even let me in the door,” said Zhou Changqi, a construction worker whose six-month-old daughter was taken in 2002 by family-planning officials in Guiyang, in Hunan province. Zhou tried repeatedly over three years to get into the Changsha Social Welfare Institute, one of the major orphanages sending babies abroad, until one day he was told: ”It’s too late. Your daughter has already gone to America.”

In much of China, villagers have long lived in dread of surprise visits from family-planning officials. In Tianxi, a mist-shrouded village of 1800 people tucked high in lush mountains near Zhenyuan, family-planning officials have made inspections as often as twice a week – no matter that getting to the village requires a two-hour drive down a rutted dirt road and then a 30-minute hike uphill. Throughout the 1980s and 1990s, when families were too poor to pay, officials would punish them by ransacking their homes or confiscating cows and pigs, residents said.

The year after the Social Welfare Institute in Zhenyuan was approved to participate in a burgeoning foreign adoption program, family-planning officials stopped confiscating farm animals. They started taking babies instead.

”If people couldn’t pay their fines, they’d take away their babies,” said a retired municipal employee from Zhenyuan who once worked as a foster parent for the orphanage.

Under Chinese law, officials are required to search for the birth parents of abandoned babies. Four months after Yang Shuiying’s daughter was taken, her photograph ran in a notice in the Guizhou City Daily along with those of 14 other babies. The ad claimed, falsely, that the baby was ”found abandoned on the doorstep” of a home in Tianxi village.

”Whoever recognises this child should contact the orphanage in 60 days; otherwise, the baby will be considered an orphan,” read the August 14, 2004, announcement, which the parents never saw, because the newspaper was not available in their village.

The US embassy said in in July that it had been advised by China’s Central Adoption Authority ”that seven officials implicated in this case have been arrested”.

But in Zhenyuan, officials denied that anybody was arrested or fired. They said penalties ranged from demerits to warnings and a demotion.

”It’s a lie that they took babies away without their parents’ permission. That’s impossible,” said Peng Qiuping, a party official and propaganda chief for Zhenyuan. ”These parents agreed that the children should be put up for adoption. They understood that they were greedy and had more children than they could afford.”

Wu Benhua, director of Zhenyuan’s civil affairs bureau, said: ”They’re better off with their adoptive parents than their birth parents.”

From 2003 to 2007, the orphanage in Zhenyuan sent 60 babies to the US or Europe. Wu said money received from adoptive parents went towards food, clothing, bedding and medical care for the babies and to improve conditions in the Social Welfare Institute.

But, before adoption, most of the babies were housed with families paid $US30 a month for their services, according to one foster parent. There were no obvious signs of renovation at the institute, a grim three-storey building with barred windows. Reporters were not permitted to enter.

”We don’t know what happened to the money, and we don’t dare ask,” said Yang Zhenping, a 50-year-old farmer from Tianxi.