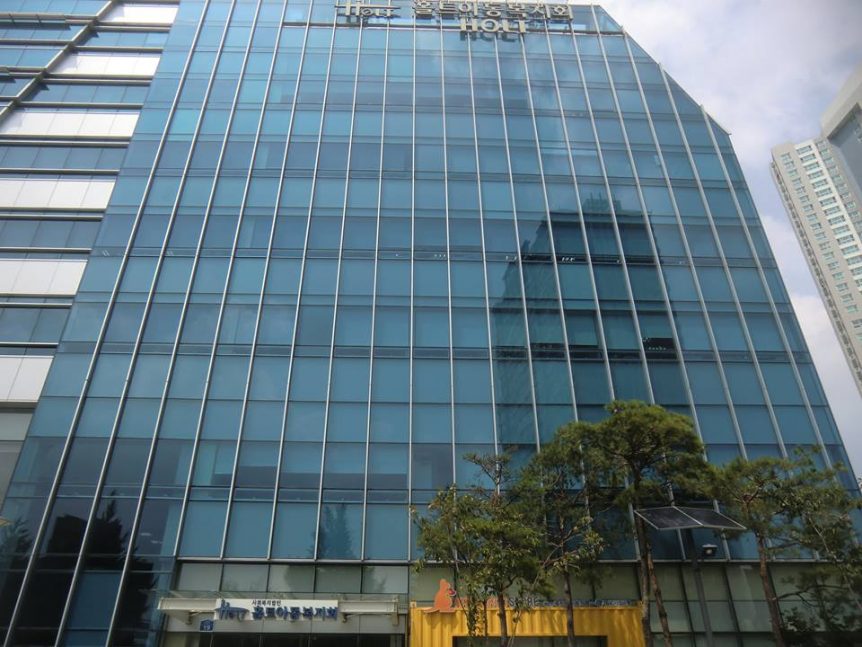 Why is this a big deal? Because the front door is typically reserved for their customers—paying people applying for a child—checkbook in hand. Adopted people are expected to enter through the back, asking questions in a hushed tone, so as not to make a scene.

For years (decades, really), there’s been talk in certain adoption circles that we need to conduct some sort of protest against Holt, to hold them accountable (for severing us from our blood family and our heritage), and to demand transparent answers (as mentioned in my second book The Search For Mother Missing: A Peek Inside International Adoption). Many were intrigued to learn they were not alone when it came to trouble with Post Adoption Services.

By this 2016 trip, it appears as if Holt in Korea takes up an entire glass building. On-the-fly, our friend, my sister, and our daughters enter through the front door. (The entry for adoptees is through an alleyway located at the back.) And while doing so, I could feel brewing questions percolating, like, what happens if the child is abused in the states, do they even know that this occurs? And who checks on the children once they are “matched.” (The way the adoption industry uses the word “match” bothers me to no end.) Are facilitators obtaining every father’s consent before expediting children overseas?

We rode the elevator to the second floor and led into a private room consisting of three couches arranged in an intimate living room setting for paying applicants and a seat for the intake person. Still, I had no idea what I would say once I sat. Bright, colorful plastic toys littered the corner spaces. Of course, the room showcased photos of happy adoptive parents embellished by their newly received children (or maybe they weren’t real. Maybe they were models) just like found on pristine agency websites and marketing materials. (I’m sorry, but I’ve seen so many charitable advertisements by now, I no longer buy into the one dominant happily-ever-after story.)

You might already know my concern for transparency started in 2004 when a Korean man approached me in a back alley and asked me to send a note to the CEO of Holt. Turns out he was a father looking for his son taken for overseas adoption. Since then, and after talking to thousands of adopted people, I’ve come to the realization that not all Asian fathers are deadbeat dads (in fact, some fathers did not even know that their children were adopted out—just like the fathers from the European Child Migration Schemes centuries ago), not all mothers are young and unwed, and not all babies are “unwanted.” In fact, after talking with mothers-of-loss, I know that mothers very much wanted their children (and still do, but have been told they don’t deserve any relationship—as if too late to build any bridge at all). Many have been stigmatized and influenced by (some coaxed–sometimes even counseled) a culture that has bought the romanticized version of adoption, leaving no room or speaking space for those who see from the inside out (rather than the outside in)—but rather accused of sharing“negative” stories. We are simply realistic. I also know many Korean mothers-of-loss today feel conned. So, yes, it is hard to see the photos of happily-ever-after families when I am aware that there is so much more to the story. People from Asia are not one-dimensional caricatures as presented in the West. All humans are multi-dimensional beings.

So, as if interested in adopting, and having no idea what we would say or where this curiosity would take us, we followed the receptionists into a private room behind the front counter. Upon sitting, I stated, “I want to know how to adopt a baby.” (The statement just blurted out of my mouth.) Before she spoke, I then couldn’t help but shoot out more questions: “Can you be a single man to adopt? …What happens if the child is abuse after adoption?”

In remembrance of Hyunsu

I thought of the three-year-old Korean boy, Hyunsu who was killed when his adoptive father gave him a shower while the adoptive mother was away. When Korean journalists inquired, Holt wanted nothing to do with being associated with the tiny boy’s death despite facilitating the adoption. Hyunsu’s foster mother wanted to adopt the boy and is reported as saying, “Holt simply ignored my request, saying it was illegal to adopt a foster child. But, later, I learned that was a lie.”

“Holt simply ignored my request, saying it was illegal to adopt a foster child. But, later, I learned that was a lie.” Hyunsu’s foster mother said in a TV interview.

The Holt organizations back as far away as possible whenever their “approved” adoptive parents abuse children. I asked aloud, “Is there a way for the child to receive help? Like an emergency number of some sort?” And “Who checks on the children?” [Does Holt Korea (the wholesaler) or Holt International (the global retailer)?]

Oh, goodness, I guess my questions have been percolating for far too long.

Taken aback, she gave a partial (but untrue) answer—claiming that if there were any problems [with the adoptive family], the child would be matched into a “better” home. But, we, adoptees, know agencies don’t check on adopted children so how would they even know if abuse occurred? Adoptive parents expect to be treated as if they all have hearts of gold. Everyone knows they’re treated with the utmost respect. As a consequence, no one has thought to check-in with adopted children, days, months, years after or even late into the adopted person’s elder years.

If adopters are unable to bond with the child, they blame the Korean foster mother or, of course, accuse the child of having “Reactive Attachment Disorder” (RAD). After that, they’ll immerse the child into a religious counseling session to “put the child in its place,” or force the child into obedience with a prescription.

“So Holt communicates with the government?” My sister asked, “And with the US to make sure the child is safe at the home? How often is it? Once a year—?”

We knew the woman on staff didn’t know. Dan Rather documented the problem of rehoming in an investigational program called “Unwanted in America.” Adoptive parents use an underground system of trading children. Another less popular film reveals the life-swapping of children initiated and run by church members via silent auction type venues and fashion shows. While “second-hand” teens and tweens of color walk a runway, a moderator describes the child’s personality and watchers make bids. Interested folks watch, size up, sort, and chose among the children, then loiter through tables, peruse photos, and finally apply for a child, as if totally normal. (A network of rural Protestant churches used an eerily similar method in the 1800s documented as the Orphan Trains. I write about it in Adoption: What You Should Know.  Let me know if you would like a pre-release copy.)

If an organization (especially a charity) recruits (uses any form of coercion), harbors (collects children into an orphanage), deceives the public, (such as falsely advertises children as orphans) and accepts payment, then they have exploited marginalized families and communities and abused their power and influence. They are guilty of adoption trafficking

particularly when the child is abused (sexually, physically, emotionally, mentally, or spiritually) or murdered within the privacy and seclusion of the adoptive home. Anyone who initiates and profits from placing a child in a dangerous situation should be held accountable. Why not? Governments punish all other human traffickers! Why have adoption profiteers been given kind exceptions? These people have permanently rearranged the lives of toddlers, young children, and babies—humans unable to speak up and defend themselves. If they unnecessarily separate a child from her family, doesn’t that child deserve to know the truth?

I was astounded when the intake woman told our male friend that he could “pay by credit card,” by “fundraising” and “God would provide” for him when he asked about transparency.

Because of the love affair with the word “adoption,” families are forever torn as if a good thing. If children are abused in the seclusion of a “loving” adoptive home, adoption profiteers have kept the word “adopted” out of the discussion—at all costs. Unconsciously, they fear mixing the words ‘adoption’ and (choose any “negative” word) will taint the industry’s pristine image. By not allowing for the hidden side of adoption to speak for itself, the adoption industry “saves face” –the beautiful, ugly face of adoption.

The staff worker admitted she didn’t think anyone checked on the children and said something like abuse rarely happened. Typical pro-adoption rhetoric, something we all have heard before. She proudly told us Holt celebrated 60 years last year and that today, ten percent of adopters are Korean adoptees and another ten percent are Korean-Americans. She concluded the meeting happy to say adoption is “really good for the child” so that we (adoptees) “continue the adoption circle.”

Afterward, I wondered if Holt’s target market are adopted people, and if this was the reason they kept sending my husband the Holt marketing materials. Unknown to them, if the Holt empire “matched” our two daughters (fortunately they are adults now) with strangers on the basis of economic wealth, we would be insulted.

“Intercountry adoption puts children at risk of abuse in the privacy of someone else’s home and at a distance greater than one can even imagine.” Janine Myung Ja

If you have not started the journey to search, I invite you to live vicariously through my twin and me. I strongly advocate for you to discover as much as possible before approaching the adoption agency. We compiled a book and an ongoing website (Adoptionland.org) to validate the adopted person’s voice and to acknowledge an alternative view. The more information you have, the more you will feel empowered. The first time I approached Post Adoption Services, I hadn’t been informed of my rights. Now I am more certain than ever: every human should have complete access to our adoption documents. Why should strangers (paid staff) have more information on us than we have of ourselves?

As expected, the social worker from Holt has not emailed us the file contents she promised us. It was fortunate that my sister had at least a copy of my “Initial Social History” on her phone for our visit to the police station. We reported ourselves as missing persons and registered ourselves with South Korea’s Disappearing Persons Unit. If a searching Korean father were to approach me in a back alley again, I would suggest for him to register his children into that database. It might not be too late for him. And, finally, for those adopted overseas who are still searching, we wish you much success.

The Truth About Our ‘Abandonment’ By Kara Bos