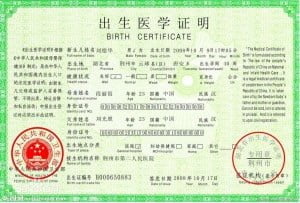 In China, fake documents obtained from the black market can be used to legitimize trafficked children.

Government official who for years sold fake birth certificates has surrendered himself to the authorities, Sixth Tone’s sister publication The Paper reported on Thursday.

Falsified documents can be used to legitimize trafficked children and babies born out of wedlock or in violation of China’s family planning policies.

The case was exposed on Wednesday by the Hunan Economic Television Station. During the broadcast, a man told an undercover reporter he sold birth certificates in Guilin, in southern China’s Guangxi Zhuang Autonomous Region, with the help of an insider who worked in a health and family planning bureau in Hunan province, in central China.

Elaborating, the man said he sold the certificates to anyone willing to give their ID number, address, and up to 100,000 yuan ($15,000). The con works, he said, because records aren’t checked across provinces.

His accomplice, reportedly called Liu Xin, had in his possession an old stamp from a local hospital and could thus forge birth certificates, which are only ever issued by hospitals. The bureau where Liu worked in Hunan said on Thursday they had contacted police on Wednesday, and that Liu had turned himself in. It also said the authorities in Longhui County, Hunan province, are currently investigating the case. The fate of the man in the TV report is unknown.

Without a birth certificate, children cannot obtain a household registration, or hukou, which means they cannot be enrolled in public schools or apply for social welfare.

In November 2014 and January 2015, China Central Television broadcast undercover investigations of black-market birth certificates. As a result, Guangdong province carried out a 10-month campaign to crack down on such fraud. In February of this year, media reported that two hospital directors in southern China’s Guangdong province were each sentenced to one year in prison for forging birth certificates for trafficked children in exchange for cash.

Child trafficking has been a major issue in China since the early 1980s, when China introduced the one-child policy. This created a supply of children who were sold because they were born in excess of family planning quotas. At the same time, it has stoked demand, with families seeking to guarantee the gender of their offspring rather than roll the dice with natural birth. Some children are reportedly trafficked for the adoption black market, while others are forced into child labor, such as begging.

Zhang Zhiwei, a lawyer who specializes in abduction cases, told Sixth Tone that black-market birth certificates make it even more difficult to find children who are trafficked. “With these documents, trafficked children can easily get a hukou,” Zhang said. “And once they have a hukou, the police lose the clues they need to crack down on trafficking.”

With additional reporting by Wang Lianzhang.