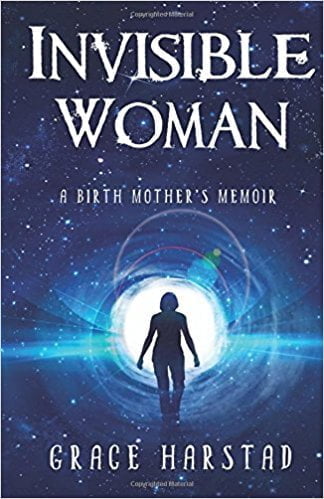 I definitely recommend Grace Harstad’s Invisible Woman: A Birth Mother’s Memoir for the public and particularly for young women—if we as a global society want to protect mothers from adoption loss.

As someone who has researched adoption internationally, historically, from the front door through to the back, nothing seems to surprise me anymore when it comes to adoption. However, Grace’s account gave me more than I had expected.

I have read and heard accounts from women in Canada, Australia, Scotland, India, Ethiopia and, of course, the United States. Still, Grace provides yet another select perspective and, due to such honesty, a worthwhile one at that.

In Invisible Women, Grace copes throughout her adult life with the aftershock of relinquishment. The book is divided into two sections: The first covers the discovery of her untimely pregnancy; and the second uncovers the search and reunion phase—years into the future. This arrangement offers much suspense for the reader. I found myself racing through the pages impatiently awaiting for her to seek and find.

Whereas most sought-after adoption stories only showcase the initial “happily-ever-after” receiving stage (typically colored babies—as if blank slates—being transported around the airport to be handed off to “more deserving” couples), Grace gifts the reader the same scenario in the narrative’s opening pages, but from a different angle. An angle I appreciate as an adopted person. At the airport, she observes a plethora of Asian babies whisked by to be presumably delivered for adoption—but  she wonders about the mothers left behind. From there, I knew she was unique.

The usage of the word “birth mother” in the subtitle might turn away some mothers who have been actively involved in fighting against the industry and the stigma attached. Many believe the word (conjured up by adoption agencies) has throughout the years reduced women to a function—so to not see herself as the mother she naturally became while pregnant. I imagine that some might even cross the word “birth” away with a red corrective pen. (As a human rights advocate, I did this in my own mind’s eye.) But I urge the reader to stay with the story. The activist mother will reap the reward of having her own private grief validated by this memoir, adding to mounting evidence (previously ousted by modern-day culture) that reveals the hidden side of adoption from behind the sterile hospital curtain (finally!).

Throughout the book, Grace conveys courage and authenticity along the reader’s path. These rare pearls have the power to save women from certain trickery if given a chance. Before you advise friends, daughters, or even foreign nations to relinquish children, I urge you to read this book.

Publisher of Adoptionland: From Orphans to Activists and The “Unknown” Culture Club: Korean Adoptees, Then and Now. The author of Adoption History 101: An Orphan’s Perspective and The Search for Mother Missing: A Peek Inside International Adoption. Co-founder of Adoption Truth and Transparency Worldwide Network and Sky Sanctuary found on Facebook.